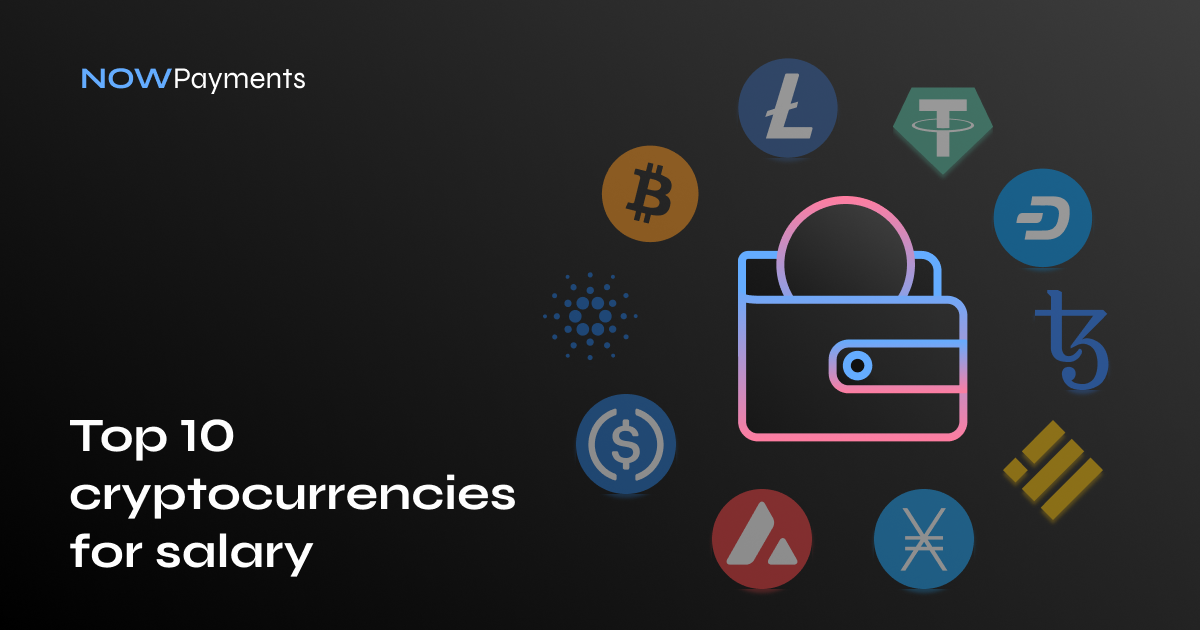 Cryptocurrency can serve not only as an investment tool but is also successfully used to pay salaries. Thanks to its advantages, crypto allows you to expand the base of potential employers, increase your income, and eliminate expensive fees. We suggest you study the top 10 cryptocurrencies ideal for salary purposes.

Crypto transactions are borderless, allowing you to access millions of jobs worldwide. At the same time, international crypto payments are much more cost-effective than both banks and PayPal. This feature of cryptocurrencies is precious for residents of countries with poorly developed banking infrastructure. Thanks to crypto, you can get a higher-paying job in foreign companies, which, among other things, entails professional development.

You will not be late paying bills

One of the most unpleasant situations that every second person has faced is a salary delay. In fact, it’s not always the employer’s fault. Old-fashion bank accounts can often process payments from several hours to days, sometimes weeks. Even worse, payments can be frozen if the bank suspects you of some illegal financial manipulation. In the case of cryptocurrency, you get your salary almost instantly, even despite the cross-border barrier.

Blockchain stores the history of your salary payments

Cryptocurrencies have a unique combo. They are private but at the same time transparent. All user transactions are recorded in a public and immutable registry. But at the same time, the blockchain does not know the names, dates of birth, and other data the bank has in its power. Thus, in any dispute, the parties can efficiently resolve the situation by providing an extract of the payments received or made.

Raise your salary without asking your superiors about it

Cryptocurrencies are an extremely volatile asset that can play for and against you. However, despite the cries of crypto opponents that the bubble will burst soon, the crypto market is increasing its capitalization every year. In a bear market, it is essential to understand that history is cyclical, and after a fall, there is a rise. Therefore, those who accept payment in cryptocurrency during the market downturn can significantly increase their savings.

What is the best crypto to accept as salary

It was impossible not to list the king of the cryptocurrency market. Bitcoin is the progenitor of the current crypto industry. The Bitcoin blockchain was launched in 2009, and this coin has never left the first place in the ranking of the most popular cryptocurrencies. Although new generations of crypto on the market are faster and more cost-effective than Bitcoin, it remains the most widely accepted and reliable cryptocurrency.

Bitcoin is also a kind of market indicator since if the price of BTC falls, the whole market falls after it. During the bear market, the BTC price has significantly decreased from the previous all-time high. However, after reviewing the price history, you may notice this is not the first case. History is cyclical, and a substantial fall is always followed by a strong rise. Therefore, by accepting a salary in BTC, you are more likely to be sure that, over time, it will grow before your eyes.

Tether is the most popular stablecoin. Tether was launched in 2014 by Tether Limited and became the first digital asset whose value is pegged to the US dollar. The peg to the US dollar is supported by the company’s reserves, including cash (2.9%), fiduciary deposits (18.4%), and commercial paper (49.6%). Market fluctuations practically do not affect the USDT rate. Minimal deviations are possible. USDT is a token launched on several popular blockchains Bitcoin (Omni Layer), Ethereum, Tron, EOS, Algorand, and OMG. Thanks to this, the ways of using USDT have significantly expanded. For example, USDTERC20 can be used in various DeFi protocols, and USDTTRC20 transactions are faster and more cost-effective.

Dash cryptocurrency was launched in 2014 as a faster, anonymous, and cost-effective replacement for Bitcoin. Anonymity (privacy) is achieved through PrivateSend technology. With the help of this technology, digital money acquires the properties of cash — it is impossible to determine from a banknote in whose hands it was before and in which payments it took part. Hence the name Dash — “digital cash”.

Dash’s advantages also include the ability to make instant payments within one second using InstantSend technology. However, an increased commission is charged for using InstantSent technology. The Dash coin is perfectly suitable for receiving a salary due to its minimal fees and high transaction speed.

Tezos is a cryptocurrency released in 2014 to improve the traditional blockchain protocols used in Bitcoin and Ethereum. Tezos operates based on Proof of Stake, as a result of which it is a more environmentally friendly and scalable blockchain. A distinctive feature of Tezos is that it updates within the chain, thanks to which the blockchain has more flexibility. This mechanism avoids the need for hard forks (splitting the network into two separate chains).

The platform is aimed at developers, offering them a convenient environment for creating new projects from the deployment of smart contracts to the development of non-fungible tokens (NFT), and dapps. Blockchain is used by large corporations and financial organizations. For example, the French banking conglomerate Societe Generale has issued security tokens based on the platform.

The well-known cryptocurrency exchange has done a lot for the development of the digital money market. Among Binance’s developments is a stablecoin pegged to the US dollar. Binance USD ranks 3rd in the list of stablecoins for 2022 in terms of popularity and transaction volume. BUSD stablecoin was released in partnership with Paxos Trust Company, which has a license from the financial regulator of New York.

BUSD is 100% backed by reserves, which include fiat cash and U.S. Treasury Bills. Due to this, BUSD has a stable USD peg. The audit is conducted by the Withum company on a monthly basis. BUSD has a high transaction speed and low fees. The stablecoin is based on ERC-20 with BEP-2 support, so it can be used on decentralized platforms and in applications on the Ethereum network. It is noteworthy that Binance allows you to buy, convert, and trade BUSD without paying fees. In addition, users can earn a 5% interest by depositing BUSD in locked savings pools.

Nano is a payment-oriented cryptocurrency utilizing the DAG-based block-lattice data structure, instead of the traditional blockchain. Nano retains all the advantages of distributed ledger technology, getting rid of the disadvantages of traditional blockchain ecosystems. Nano does not reduce throughput at high loads and does not charge transaction processing fees. Thus, by accepting nano as a salary payment method, you will never face a delay in payment, since transactions are carried out instantly.

Due to the fact that there are no transaction fees, your employer saves money that can be used to increase your salary. In addition, if you are an eco-activist, then nano will please you with its eco-friendliness. Nano does not use mining and is even better than cash because it does not need to be printed. As for the price of nano, although it is volatile like all cryptocurrencies, it should be noted that nano is less prone to sudden fluctuations.

Launched in 2020, the Avalanche blockchain is a direct competitor to Ethereum, which is successfully moving towards the goal of displacing the old man and is already in the top 20 cryptocurrencies. Avalanche allows you to build incredibly fast, low-cost EVM-compatible decentralized applications, as well as deploy private and public blockchains. Avalanche has a high throughput (about 4,500 TPS) while maintaining near-zero transaction fees. This is achieved thanks to the unique modular architecture. In fact, the Avalanche network is divided into three blockchains, each of which has its own orientation.

In addition to these advantages, Avalanche also utilizes an innovative consensus protocol that is highly secure, decentralized, and productive consensus protocol. Thanks to the listed characteristics, AVAX can be an excellent choice for those who want to accept a crypto salary. In addition, given the rapidly growing popularity of the project, you can use AVAX for investment purposes.

USDC is another popular stablecoin that is neck and neck with USDT. This stablecoin has high transparency and liquidity. USDC is issued by the Circle issuing company in partnership with the Coinbase crypto exchange. To assure users that all tokens are fully secured, the company publishes public audits on a monthly basis. About 60% of tokens are backed by cash and cash equivalents, and the rest of the reserves are backed by non-cash financial instruments.

Litecoin may not be the most capitalized, but one of the most reliable and time-tested cryptocurrencies. Litecoin was one of the first forks of Bitcoin, which was created to become a faster and cost-effective replacement for its progenitor. For so many years, the coin has not lost its relevance, which allows us to judge the reliability of the project. Litecoin allows you to send rocket-fast, near-zero cost transactions.  Due to this, LTC is widely used in commerce, for remittances, everyday transactions, and so on.

In addition, Litecoin is one of the few cryptocurrencies, along with Bitcoin, Ethereum, and Bitcoin Cash, which are supported by the popular PayPal online payment system. Moreover, over the past year, Litecoin developers have launched some long-awaited updates: Omnilite and Mimblewimble. The Omnilite protocol allows you to issue custom tokens on the Litecoin blockchain. And Mimblewimble allows users to make anonymous transactions.

Cardano is a third-generation cryptocurrency that has a number of advantages over digital assets of the first two generations, more famous and widespread, but less perfect in terms of technology and software. Cardano consists of two layers: the first is the base layer for token processing, and the second is created for the high-quality operation of smart contracts. Thus, Cardano functions both as a cryptocurrency and as a platform for smart contracts.

The platform is characterized by a flexible structure, which allows it to be improved in any direction by introducing soft forks. The development of Cardano is based on an academic approach, and all implemented technologies pass through peer-reviewed research. One of these technologies is the innovative blockchain protocol Ouroboros, which allows Cardano to effectively cope with the trilemma of the blockchain: decentralization, scalability, and security.

How to send salaries with NOWPayments

It is perfect for businesses wishing to facilitate the process of sending different types of crypto payments, such as salaries. Follow these steps to start sending mass crypto payments:

In this article, we have reviewed the top ten cryptocurrencies that are ideal for accepting salaries. NOWPayments supports all the listed digital assets and more than a hundred others. With the help of our crypto payment gateway, you can easily set up the acceptance of crypto salaries.