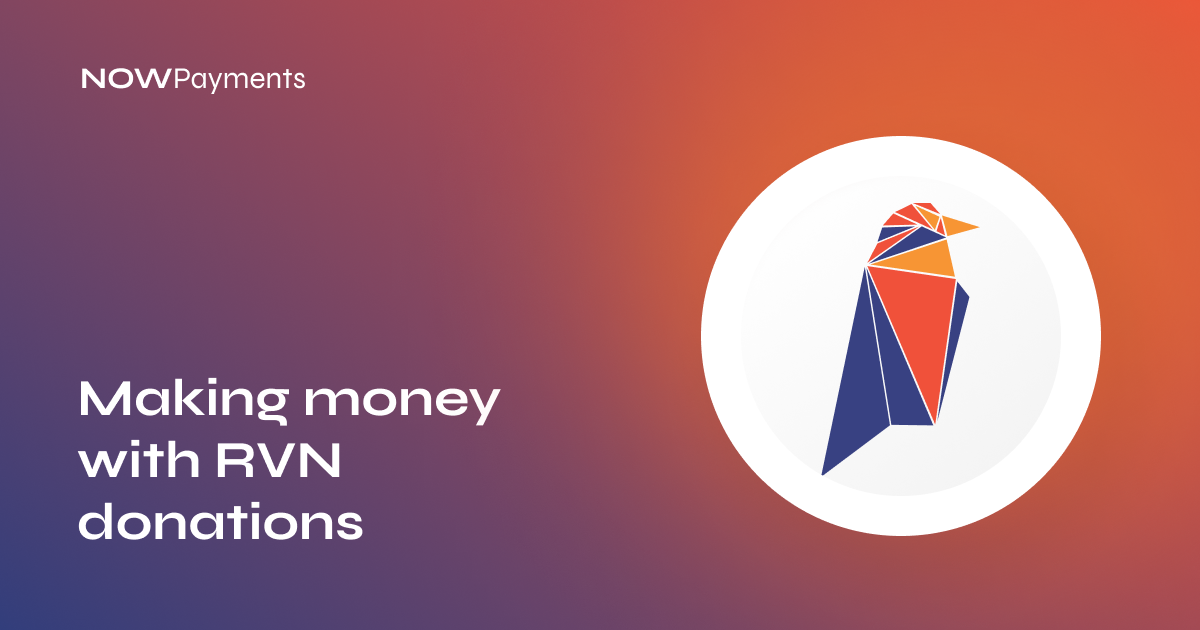 RVN is the native coin of Ravencoin, and it is a highly-flexible asset. Many people and organizations can enjoy a great number of benefits if they decide to put RVN donations to use. NOWPayments lets you accept RVN as a means of donation easily and seamlessly.

Ravencoin is a peer-to-peer network designed to transfer assets from one user to another efficiently. Ravencoin is a fork of Bitcoin and an open-source project which is being built by a community of enthusiasts. The RVN token acts as the fuel of the network. Users can mine RVN or buy it on crypto exchanges.

Who should accept RVN donations

In order to maximize the amount of donations, charities need to feature as many donations as possible. This can enable them to target the largest number of people and will make it more convenient for them to donate money. The RVN token is an excellent choice for crypto donations because it has a large community of investors willing to spend their coins on good causes.

Besides charities, there are many other non-profits that can benefit from RVN donations. For instance, nonprofits can use RVN NFTs to raise funds for their projects. By selling NFTs for RVN, they can get the required funding. It costs mere cents to mint Ravencoin NFTs, but you can sell them for any sum of money.

Ravencoin transactions are not only low-cost but also quick. Streamers use donations as a way to communicate with their audience. Fast RVN coin transactions can let streamers receive donation messages from their fans without any severe latency and delays.

Musicians, especially independent ones, often struggle to make money selling their music. This is why they can rely on donations from their generous fans as a means to earn a living. RVN transactions are extremely cheap, so musicians can get large donations and avoid the need to lose a share due to fees.

Bloggers and other content creators are another demographic that can benefit from RVN donations. Bloggers can monetize their loyal audience by allowing them to send RVN donations. RVN donations are borderless, and they can be sent and received anywhere in the world. So, RVN is a great tool for getting donations from your international audience.

All people and organizations that accept donations often worry about the size of fees that they and their supporters need to pay to make and receive donations. Banks can charge outrageously high fees for processing transactions. This prevents many individuals from donating their money in the first place because they do not see much sense in it.

Yet, crypto donations such as RVN do not have a high-fees issue. On average, you will pay less than $0.1 for an RVN transaction. This means that you can get RVN coin donations without losing a large chunk of the donation sum in the process.

To send and receive donations, people usually rely on banks. Yet, since every nation has its own banking system, the interactions between institutions of different countries can be quite tricky. In fact, in some instances, it is impossible to send money from one country to another.

There is also a problem of slow transaction processing due to the difference in jurisdictions. Ravencoin, on the other hand, ignores all the borders. RVN transactions are peer-to-peer, so they do not need any institutions such as banks to confirm and process them. RVN transactions take mere minutes and can be sent from anywhere to anywhere.

There is even no formal registration process or KYC procedure. To use RVN, you simply need to create private and public keys. Charities that have donors who do not wish to disclose their private info can offer RVN as an anonymous donation method.

Transparency is the key for every charity. If you raise money for something, you need to prove that the money donated by hundreds of people has actually been used for the proper purpose. The Ravencoin blockchain is perfect for making charities’ balance sheets as transparent as possible.

Ravencoin is a public blockchain, so information about the transactions and public addresses that it hosts can be seen by everyone. If a charity decides to disclose its RVN deposit address, every person in the world will be able to see how much money has been raised and how much has been spent.

Ravencoin’s main asset is the community of investors, developers, and influencers who love the coin and want it to prosper. Ravencoiners actively support and promote every RVN use case.

Charities, streamers, bloggers, musicians, and other creatives can generate a new use case for RVN by simply featuring RVN donations. This can potentially draw the attention of a lot of RVN investors to your project. It is likely that some RVN holders will donate to you as a way to show their gratitude for your support for the coin.

How to accept RVN donations

NOWPayments is a Ravencoin payment gateway that features a set of tools for accepting RVN donations:

The Ravencoin crypto is a great asset that you can turn into a means of donation using NOWPayments.