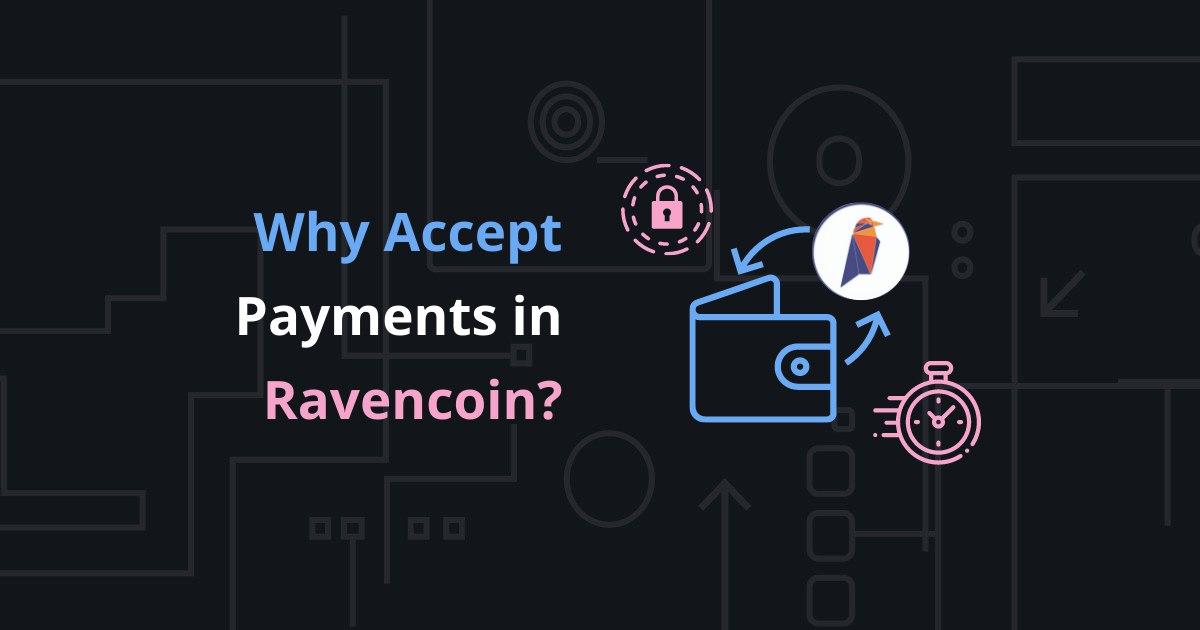 Cryptocurrency payments have taken the world by storm since the massive bull run in 2017, which ensured cryptocurrencies would be used globally. It brought forth many new companies that wanted to adopt cryptocurrencies into their ecosystems and start utilizing all the benefits of the blockchain.

Most users joined the blockchain/crypto space to get away from the traditional financial set-up, with big banking fees and other problems associated with fiat. Cryptocurrencies are an alternative method that allowed users to have 100% control over their funds.

Ravencoin is one of those cryptocurrencies which allows users to make peer-to-peer transactions of assets. So let’s go for more of an in-depth look at Ravencoin, and we’ll tell you about why accepting payments in RVN is truly beneficial.

Ravenсoin is a peer-to-peer network based on the blockchain. This project aims to make seamless transactions of assets from one user to another, improving on the issues associated with Bitcoin, like high fees and long confirmation times.

Ravencoin is a fork of the Bitcoin code and was launched on 3rd January 2018, almost 3 years ago. The project is open-source, which means there was no ICO and there are no master nodes. The main focus of the project is to build fantastic technology and grow its loyal community. Ravencoin features 4 changes in comparison to the bitcoin code those being:

The KAWPOW mining algorithm has been designed to fight against the centralization of cryptocurrency mining. It allows for more commercial-grade GPU to be used for mining and gives a more decentralized aspect for users. The KAWPOW mining algorithm is designed using the ProgPOW and ETH hash algorithms with new updates to enhance the Ravencoin and make it accessible and better distributed to the average user.

If you’re looking to transfer assets using a tokenized currency then using Ravencoin is the way forward. It gives you the added luxury of making transactions that are fully transparent where you can issue, transfer, and track assets on the blockchain. It gives you 100% control of the tokenized asset rather than letting 3rd party authorities act as the middle man like you see all the time in asset transfers.

If you’re looking for a community-driven system, then Ravencoin is perfect for you. This project is entirely driven by the community and uses a voting system that is entirely based on the community but isn’t dependent on the larger token holders making decisions. It results in 100% decentralization rather than having centralized companies running things.

How to Buy Ravencoin (RVN)

Here’s a quick list of the top custodial exchanges you can use:

For custodial exchanges simply sign up by creating an account. Once you’ve created the account by putting in your personal details deposit the funds you’d like to use for the transaction. From here find the RVN BTC pair or the RVN ETH pair and simply set your buy order. The current RVN market is booming, as of writing this article the price of 1 RVN token is $0.162096 with a market cap of $1,337,977,319. The Ravencoin bitcoin price is currently at 0.00000335 BTC.

So what’s the best wallet for holding RVN crypto? We’ll tell you about that in the next section.

This wallet was specifically designed to hold RVN cryptocurrency, so it’s one of the most trusted places to hold your tokens. It’s compatible with almost all devices. You can download it on your iOS and Android devices through the App Store and Google Play Store. There is also a desktop version that works for Windows, Mac, and Linux. However, if you’d like to use another type of wallet here is a list of other wallets that you can use:

You can also download the Ravencoin app to your Ledger to store the tokens on the hard drive wallet. This is great for users who want to hold their tokens on cold storage rather than on their internet wallets.

Making payments in Ravencoin is quick and easy. You’ll be able to transfer tokenized assets with a blink of an eye using the Ravencoin protocol. The low transaction fees and structure is great to keep the blockchain running smoothly, so any assets won’t get stuck for hours like they’ve done previously with Bitcoin. It’s the ideal place for users, so good luck with making your payments with Ravencoin.