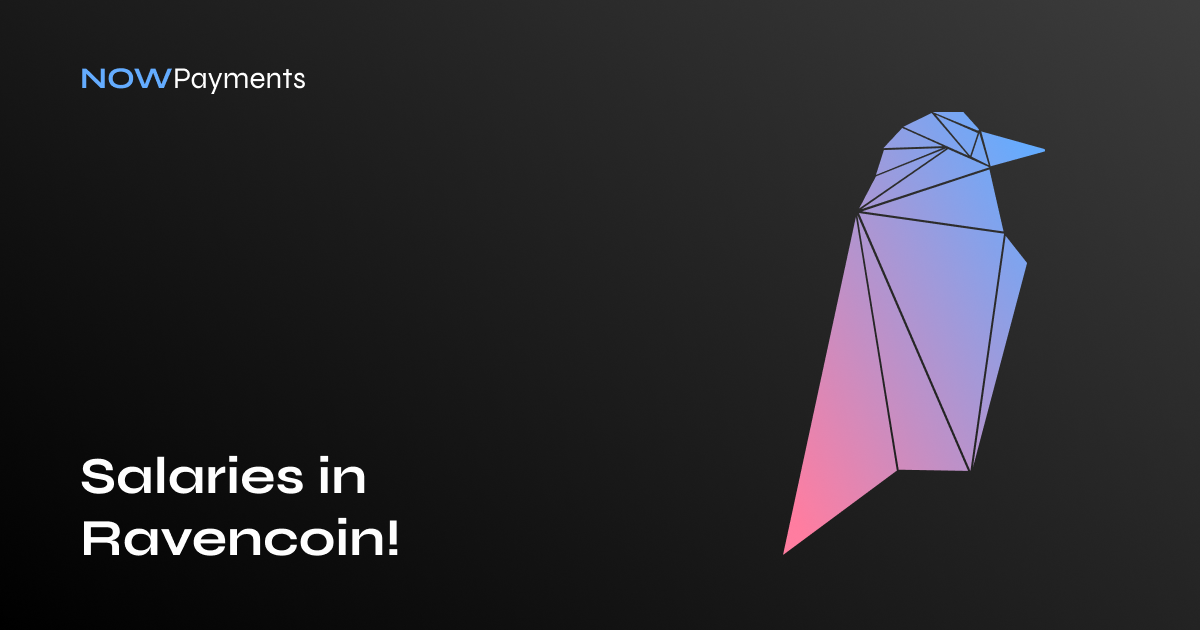 There is no digital asset-oriented blockchain better than Ravencoin. The project was one of the most influential networks which brought on the recent NFT craze. The Ravencoin blockchain handles an efficient creation and transfer of assets from one party to another. Ravencoin is based on a Bitcoin code fork, but it has its unique features letting users issue their tokens on the Ravencoin blockchain. At the same time, apart from NFTs, Ravencoin has more cool features to offer. For instance, businesses can use Ravencoin to pay salaries in it to their employees. NOWPayments’ mass payments solution enables businesses to make multiple RVN coin transactions efficiently.

Ravencoin is a peer-to-peer blockchain aiming at implementing a use case-specific network. It is designed to address one particular function, namely, facilitating transfers of assets from one user to another. As mentioned above, it is a fork of Bitcoin launched in 2018. Ravencoin is an open-source project focusing on building a relevant technology with a tightly-knitted community. RVN token is the native Ravencoin crypto that investors can either mine or buy on major crypto exchanges. Ravencoin utilizes the Proof-of-Work consensus model and is ASIC resistant, thanks to its KAWPOW hashing algorithm. The algorithm ensures decentralization and establishes an equal opportunity for all users to mine or purchase RVN coins.

Ravencoin uses the PoW consensus, which is generally not regarded as the most efficient tool for processing crypt transactions. At the same time, thanks to the incredible work done by Ravencoin’s community and its engineers, the project managed to attain amazing results in terms of improving the performance of the network. As a result, the Ravencoin blockchain has achieved a great throughput and, thus, provides users with exemplary scalability. Basically, on average, RVN transactions take only mere minutes. This is why RVN is the right fit for businesses that wish to get a salary cryptocurrency that will help them to make their salary payments faster. RVN salaries are quick, which is also great news for all employees who wish to get their salaries in a fast way. Thus, offering RVN salaries positively responds to the needs of both businesses and employees who always want their payments to be processed swiftly and without problems.

One of the key shortcomings of the established financial system is the limitations arising from geographic boundaries. Since different banks and similar payment-processing services are subject to their own jurisdictions’ rules, they frequently experience issues when transferring money from one country to another. Sometimes it may even take weeks for a transfer to get from one person’s bank account to another’s. As a result, businesses that use this method of transferring payments cannot operate efficiently. Modern companies have employees all over the world; therefore, paying them can be a difficult task. Yet, RVN transactions not only take minutes to process but also greatly facilitate the international payment process by being borderless. This implies that RVN is not regulated by any country or institution. Therefore, all of the RVN transactions happen in a peer-to-peer way. This eliminates all of the unnecessary intermediaries between the sender and the recipient and makes crypto salaries a perfect tool for companies which have many foreign employees.

Another issue that businesses face when sending salaries and accepting payments is the large costs that stem from fees. Nowadays, banks charge businesses high interchange fees, which eat into their resources. As a result, in order to send a salary to an employee, businesses have to fork out significant sums on fees. Small businesses are particularly impacted by the fee policies of banks in a negative way. Shifting to cryptocurrency salaries is a viable way for companies to avoid paying massive fees to banks. RVN fees are among the lowest ones in the industry. Basically, on average, one Ravencoin transaction costs users mere cents. The Mass Payments feature provided by NOWPayments enables businesses to send salaries in RVN through a Ravencoin payment gateway and thus significantly reduce their fee expenses. After all, lower fees also mean fewer costs and potentially larger salaries for employees, so why not try it.

How to pay people in Ravencoin?

Ravencoin is a highly-efficient blockchain offering an amazing cryptocurrency, RVN. NOWPayments’ Mass-Payments feature is perfect for businesses that want to send salaries in RVN.