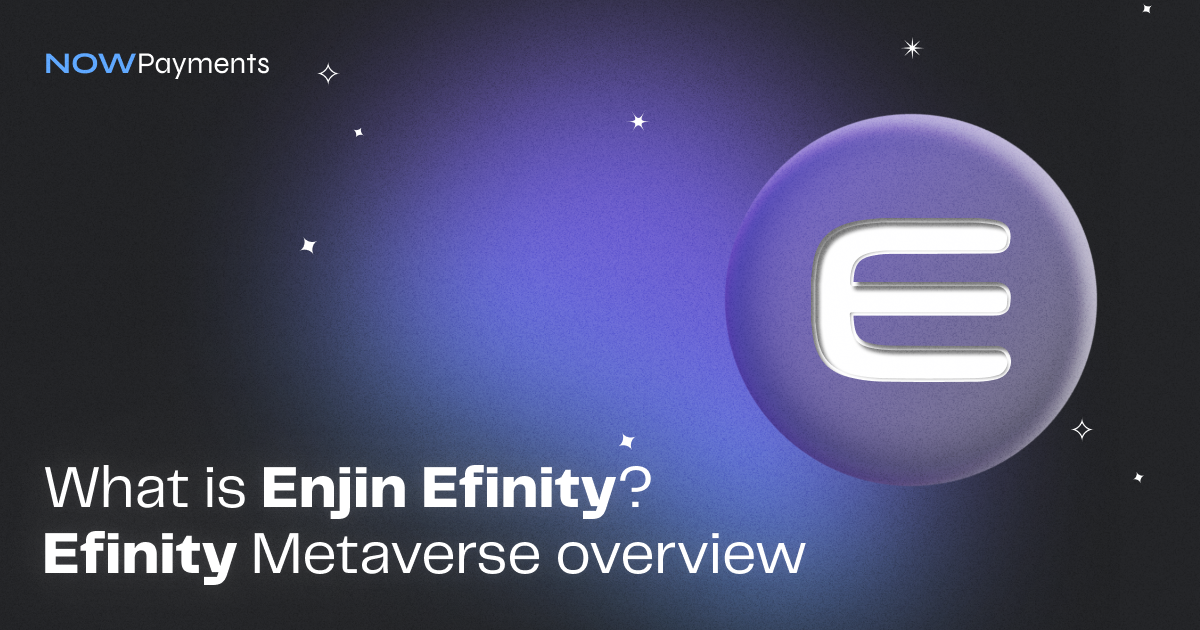 Enjin is a leading solution for the creation of NFTs that can be easily integrated with blockchain games. Enjin’s primary feature that makes it stand out is the fact that all Enjin NFTs are backed by the project’s native token, ENJ. Subsequently, users can melt any Enjin-powered NFT back to ENJ tokens. So, every Enjin NFT inherently has value. Efinity is a new venture of Enjin. Specifically, it is a blockchain whose mission is to act as a foundation for a decentralized and cross-chain metaverse of NFTs. The future of Enjin and Efinity looks exciting, and you can become part of it by accepting ENJ as a payment method.

What is Efinity Metaverse?

Efinity can be described as a full-blown NFT ecosystem. Basically, the creators envision Efinity to become the Internet of NFTs. Enjin, in its turn, constitutes a set of NFT development tools. Efinity. Efinity’s core blockchain infrastructure will grow independently thanks to the efforts of third-party developers and their contributions.

Efinity can be described as a cross-chain NFT highway enabling a future where NFTs are common and easy to use. Any NFT from any chain (for instance, Ethereum) can be moved to Efinity, supercharging it with next-gen features. Every Efinity NFT will be compatible with any industry and will unlock the potential of NFTs to become a trillion-dollar market.

Efinity possesses several key advantages making it a unique product. It is much better than its competitors since it offers complete decentralization, infinite upgradability, real-time NFT valuations, and instant NFT sales. It is also faster since it will allow users to mint 20 million NFTs per second. Most importantly, Efinity transaction fees are expected to cost only a few cents which is much lower than the average gas fee size of Ethereum and other similar networks.

What does Efinity mean for ENJ community?

The creation of Efinity signifies a new era in the Enjin ecosystem. It has good prospects of becoming one of the biggest NFT platforms in the world thanks to its cutting-edge technological solutions. Efinity constitutes an invaluable asset to the Enjin community as a substantial source of utility. The development and advancement of Efinity promote the growth of the ENJ value benefiting all Enjin investors.

How NFT community can benefit from crypto payment gateway?

Moreover, they can do it globally since crypto transactions are borderless and can be sent from and to any part of the world. Crypto payments can enable NFT creators to gain an international audience and pool of investors. So, if you have an idea for an NFT collection, but do not have sufficient resources to create it, asking people in the community to give you a hand can be a way to go.

Achieve the ultimate level of transparency

Transparency is another advantage of crypto payments and Enjin crypto payments in particular. For instance, if you decide to raise money for creating an NFT collection, there are several ways to do it.

You can go down the standard path and create a page on a fundraising platform, or you may feature crypto payments. Yet, in the case of the former, it will be difficult for you to show how you spent the money you have collected since fundraising platforms show only the sum raised by projects. Enjin token addresses are fully transparent, so your investors will see not only how much you have raised but also how much you have spent.

If you already own an NFT collection and it has had its share of success, you can think of a new way to monetize your brand. For example, you can begin selling merch for your NFT collection. NFTs have amazing artworks, so why not put them on clothes?

The people you have bought your NFTs will be excited to purchase some cool items with their NFT pictures printed on them. By utilizing ENJ as a payment method, you will be able to sell your merchandise internationally without any obstacles and delays.

Another great use case for Enjin coin payments that the NFT community may be interested in is selling whitelist spots. Basically, if your upcoming NFT collection already has thousands of people dying to obtain it, you can make some extra cash.

Basically, you can provide these people with a chance to purchase an ability to have a guaranteed opportunity to buy an NFT. You simply create a whitelist and sell each spot in it for a certain price. Conducting payment transactions in crypto will also be beneficial because it will make the information about the addresses on the whitelist transparent.

Businesses and individuals can accept Enjin coins as payment or donations using these tools:

Here is a guide on how Enjin coin invoices can be created:

What is Efinity built on?

Efinity is built on Polkadot. The decision to choose Polkadot over Ethereum is based on the fact that the former has a more efficient and decentralized infrastructure. Thus, by utilizing Polkadot, Efinity can offer faster transactions, lower fees, and a massive capacity to mint large numbers of NFTs.

What is Enjin and Efinity?

Enjin is a tool suite enabling developers to create and manage virtual assets (NFTs) on the Ethereum blockchain. Efinity is a next-gen blockchain intended for NFTs and powered by Enjin. Enjin is the best set of NFT development tools in the space, while Efinity is more like the Internet of NFTs.

Who is behind Efinity?

Efinity is being built by the same team behind Enjin. Essentially, the founders of Efinity are Maxim Blagov and Witek Radomski, the CEO and the CTO of the Enjin project respectively. The team consists of highly-experienced professionals who have been working in the industry since 2009.

Learn more about ENJ and Enjin