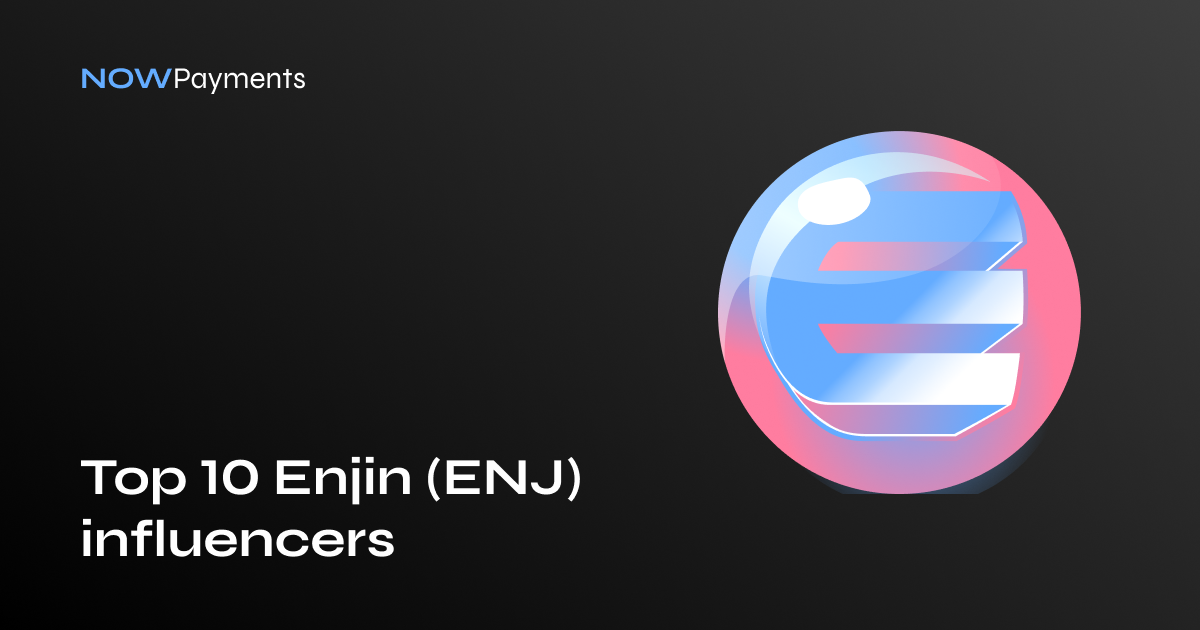 Enjin is a company which is building a product ecosystem that seeks to help humanity create advanced virtual economies through the power of blockchain technology. The main use case for Enjin is NFTs and gaming. Enjin offers SDKs for the creation of digital assets on the Ethereum blockchain, which can then be integrated into apps and games. Using Enjin’s solutions, developers can freely customize their projects and create unique products. Enjin also has its own blockchain called Efinity made specifically for NFTs. As a result, Enjin is a fairly big name in the NFT and gaming segments of the blockchain industry. If you wish to get to know Enjin better or keep up with all the Enjin-related news, you can follow Enjin influencers on social media. Here is the list of the most prominent Enjin personalities you can find on Twitter and other platforms.

Why is Enjin popular?

Yet, first, let’s take a close look at the main use cases making Enjin so popular.

As mentioned above, Enjin focuses on the next-gen NFT creation. Gaming is one of the key areas where Enjin’s solutions are extensively utilized. Using ENJ, developers can create gaming NFTs which are freely tradable, truly owned by gamers, and transferable between games. The NFTs created with Enjin can be adjusted to fit the needs of specific use cases. For instance, NFT creators can get a percent off each sale of the token they made. There are many games that use Enjin. Lost Relics is an example of an online game that provides players with a chance to get their hands on actual NFT in-game items.

Enjin’s NFTs are also perfect for creating incredible collectible items. For instance, there is an option of creating “breedable” items. Essentially, users can take their NFTs and create new ones. The coolest example of NFTs powered by Enjin is the Azure Heroes created by Microsoft Azure. The program involved minting exclusive NFT badges, which then were distributed among 6400 people. The fact that a big brand such as Azure decided to use the Enjin platform shows the true utility that Enjin brings to the sphere of NFTs and blockchain.

Other types of NFT utility

Apart from gaming and collectibles, Enjin enables people to create NFTs for virtually any kind of purpose. The Enjin platform can be used for creating artwork NFTs which artists can display in metaverse or sell online. Similarly, music can be turned into NFTs. Essentially, the Enjin platform’s flexibility is what makes it so popular.

So who are the Top Enjin influencers?

Maxim Blagov is the co-founder and the current CEO of Enjin. He is certainly the person who you should follow first thing after you buy ENJ tokens. Once you start following Maxim on Twitter, you will receive all of the latest news on Enjin, Efinity, and other projects from the NFT segment. For instance, recently, Maxim posted a tweet offering ENJ users to mint a highly-unique Diamon Hands NFT that costs more than $8 million. Basically, by following Maxim, you will get info on the most exciting NFT projects in which you will also be able to participate. So, Maxim’s Twitter account is a must-have for every Enjin investor.

Witek Radomski is another co-founder of Enjin and its current CTO. Witek’s feed mostly consists of reposts related to Enjin and Efinity. Witek is not that active on Twitter but he still makes sure to expose his audience to the most important Enjin developments. At the same time, Witek often gives interviews where ENJ investors can come across a plethora of new insights about Enjin. For instance, the latest interview of Witek was with Brian Rose from London Real. If you are a real ENJ and Efinity fan, you should definitely check it out since you can learn a great deal about metaverse.

Eirik the Viking is a notable Enjin influencer and an NFT enthusiast who has a large collection of NFTs deployed using Enjin. Everyone who follows Eirik has a chance to get their own Viking NFT absolutely for free since Eirik regularly holds giveaways. So, this is definitely a good reason to give Eirik a follow. At the same time, Eirik’s Twitter account has many mentions of other exciting Enjin projects. For example, Eirik supports Space Misfits, another great Enjin-based game that can be particularly interesting to explore for every ENJ investor.

Esscay is the founder of MyMetaverse, a metaverse explorer, game library, and app store for NFT experiences which is powered by Enjin. Basically, Esscay is not simply an ENJ investor who shills for Enjin online but a real Enjin developer with considerable experience and extremely successful projects. MyMeta MMO is one of the games developed by Esscay and his team. This game, which is enjoyed by numerous people around the world, enables players to breed their NFT characters and purchase NFT real estate. So, Esscay is a significant asset for the Enjin community.

Ilija Rolovic is another Enjin team member. Ilija is Chief Growth Officer at Enjin. Ilija is definitely a person that should be on your following list since by following him, you will not miss out on the most important news of Enjin and Efinity. Ilija lives in Belgrade, so sometimes you may see him writing in Serbian. Judging by Ilija’s Twitter feed, he appreciates Elon Musk’s memes. So, if you also love Elon’s humor, then you are guaranteed to like Ilija’s content. After all, giving a follow to the Chief Growth Officer of the project you invested in sounds like a smart move.

Esther Jade is the head of support and QA at Enjin. Since Esther works for Enjin, you can expect to receive a lot of Enjin and Efinity-related content in your feed if you follow her. Additionally, Esther creates amazing Twitter threads. For example, here, you can read the list of the key crypto events that happened in 2021 compiled by Esther. Esther also creates her own NFTs. Take a look at her NFT Tea collection, the items from which you can purchase. Esther sometimes posts her articles. Consider reading her top safety tips for every owner of cryptocurrencies.

eGamers.io is a major media on the topic of the metaverse. You can read eGamers.io’s news both on its official website and in its Twitter account. eGamers.io provides its readers with opportunities to learn and educate themselves on metaverse, NFTs, and blockchain. eGamers.io posts regular updates on the prices of the key metaverse tokens, including ENJ. eGamers.io is the ultimate place for discovering the most exciting metaverse projects. Essentially, if you have been searching for a place where you could find new titles to play and potentially earn actual digital currencies, you should certainly follow eGamers.io.

CoinsKid is the name that is known to a fair share of the crypto community. CoinsKid is particularly popular among the YouTube audience where he posts quality analyses of different digital assets and their market positions. Although CoinsKid covers a wide range of cryptocurrencies, ENJ is one of those that make it to CoinsKid’s videos on a regular basis. For instance, check out the latest ENJ price prediction video from CoinsKid. If you invest in ENJ and want to be successful in it, then you will surely need to compare your forecasts with those of other people, and CoinsKid is a great choice for you since he is a highly-reputable expert.

Tim Danenberg, who is also known as the “Follower of ENJIN coin” on Twitter, is one of the most loyal supporters of ENJ on social media. Although Tim does not have a large audience of thousands of followers, he goes to great lengths to contribute to the promotion of his favorite coin. Tim always makes sure to make retweets of the hottest Enjin news. As a result, Tim’s Twitter account is a real treasure for everyone who wants to stay updated on all of the Enjin developments. Tim collects news from different sources and makes it convenient for others to get up to speed on everything that is going on with ENJ.

As you can see, the Enjin team and community consist of amazing individuals, and Caleb Applegate is another one of them who has a presence on social media. Caleb is Chief Operating Officer at Enjin. This means that Caleb has actual insights into Enjin and the project’s development. Although Caleb mostly only makes reposts of other Twitter users, he occasionally participates in AMAs with other Enjin employees. Additionally, Caleb provides the Enjin community with the latest updates. Take a look at the most recent video from Caleb, where he talks about Enjin wallet and Enjin marketplace.

Enjin is a platform that considerably contributes to the advancement of the metaverse. As a result, Enjin is supported by an incredible community consisting of investors and influencers. If you wish to support Enjin, you can further promote its utility token ENJ by accepting it as payment or donation.