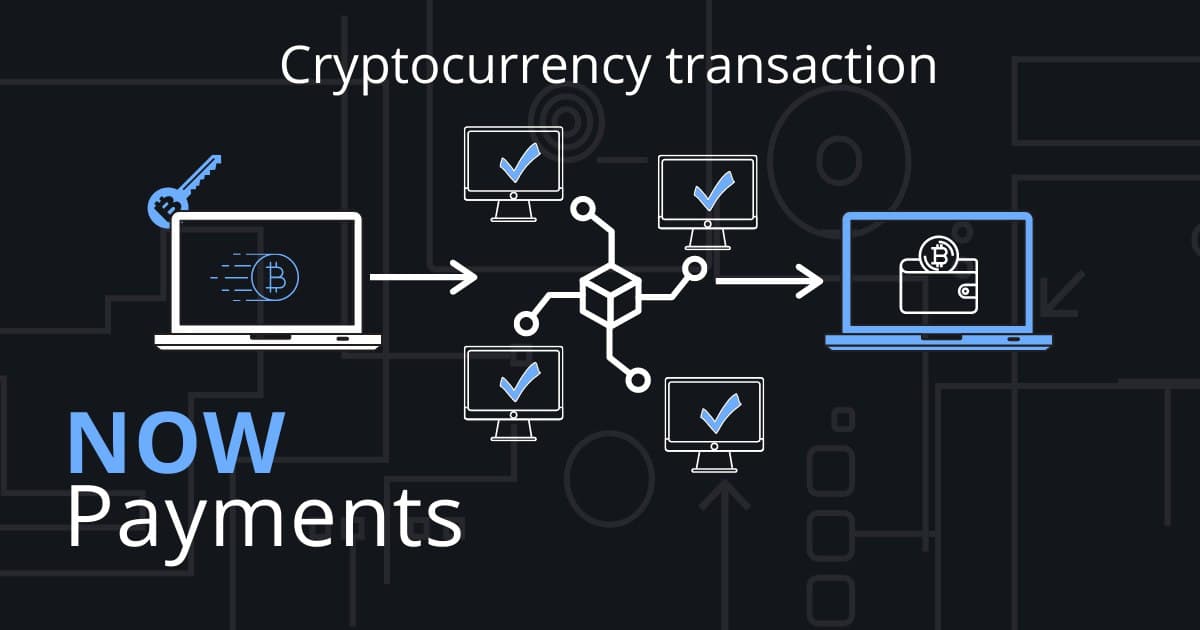 Accepting crypto payments with NOWPayments is a simple and fast process. The transactions… Wait, what are these transactions? Let’s find out!

Crypto transactions follow the same schematics of any other type of digital or online transaction. Currencies are transferred from one peer to another using software. The software is known as cryptocurrency wallets or crypto wallets. One needs to know the private key required to initiate the transaction.

Overall, there could be three types of fees associated with a cryptocurrency transaction. These are exchange fees, network fees, and wallet fees.

Exchange Fees: These are blockchain transaction fees that are similar to fees charged by traditional market exchanges. In other words, these are commissions charged by exchanges against a buy or sell order or trading as a whole.

Network Fees: These are blockchain transaction fees paid to incentivize miners. Miners are individuals with high-powered computers. What they do is they verify and validate transactions before they could be added to a blockchain. These fees are called network fees because they vary from one network to another. The reason they vary is that miners in each network set their fees and investors decide whether to use that network or not depending on whether they agree to the miner’s rate.

Wallet Fees: The crypto wallets are not entirely free of cost. They charge a nominal amount to store the cryptocurrency.

Bitcoin is the cryptocurrency that occupies the maximum cryptocurrency market share. Here, we will try to understand how a bitcoin transaction works.

Bitcoin transactions were originally conceived as peer-to-peer transfer of electronic cash. A bitcoin transaction appears like a message. These messages are comparable to emails and are signed digitally using cryptography. Once signed and dispatched, these transactions appear on the distributed ledger accessible by anyone present on the bitcoin network to verify.

Components of a Bitcoin Transaction

Every bitcoin transaction has three basic components: an input, an output, and an amount. The input is the public address from where the sender received the bitcoin he or she wants to send. The amount corresponds to the specific amount of BTC that is to be sent. The output is the public key of the receiver.

As per currently existing bitcoin protocols, each block is limited to a size of 1 megabyte. This is a deterrent for many bitcoin transactions to get verified at one installment.

The current limit for bitcoin transaction time, block-wise, can be increased. But the time, as has been set currently, helps to limit the number of transactions that enter the blockchain. This is done so that increased traffic of transactions does not slow down the confirmation time, making the entire network slow in turn.

Let’s consider a bitcoin transaction between a user and a merchant. Suppose the user owes the merchant 0.25 BTC for a certain service he had provided. Now, if the user has 0.5 BTC in his/her wallet, the amount cannot be broken down. The entire amount gets deployed in the transaction. 0.25 goes to the merchant and the rest of 0.25 goes to a new account that the bitcoin wallet creates to receive the change from the merchant.

Although the process may sound complicated, one has to remember that creating a new address to receive the change is not something that the user has to do. It happens automatically through the user’s wallet.

Transaction fees vary for most of the platforms. Therefore, it is often difficult to point out a single platform that offers the lowest ones. Going by average rates calculated from daily prices over an extended period, TRON was found to be one of the platforms with the lowest transaction fee in the market. TRON was followed by Ripple, EOS, Bitcoin Cash, Litecoin, Ethereum, Dash, Bitcoin, and Monero.

Some of the popular platforms are often the ones that have comparatively higher transaction costs. This is because the miners are well aware of how important these platforms, such as Bitcoin and Ethereum, are for the businesses and customers habituated with crypto transactions. Therefore, the miners enjoy an edge in terms of asking a higher rate to validate and verify transactions in these exchanges.

In the days to come, the volume of crypto transactions that run through decentralized exchanges has to be increased. Improvements in user experience and user interaction features are expected to expedite the transition. With the increasing adoption of cryptocurrencies, we will see a rapid uptick in the number of crypto transactions. More and more websites are now starting to accept crypto payments to tap into a huge customer base. With the increasing number of websites accepting crypto payments, we will see more people paying in crypto. The future definitely looks bright for the crypto payments landscape.