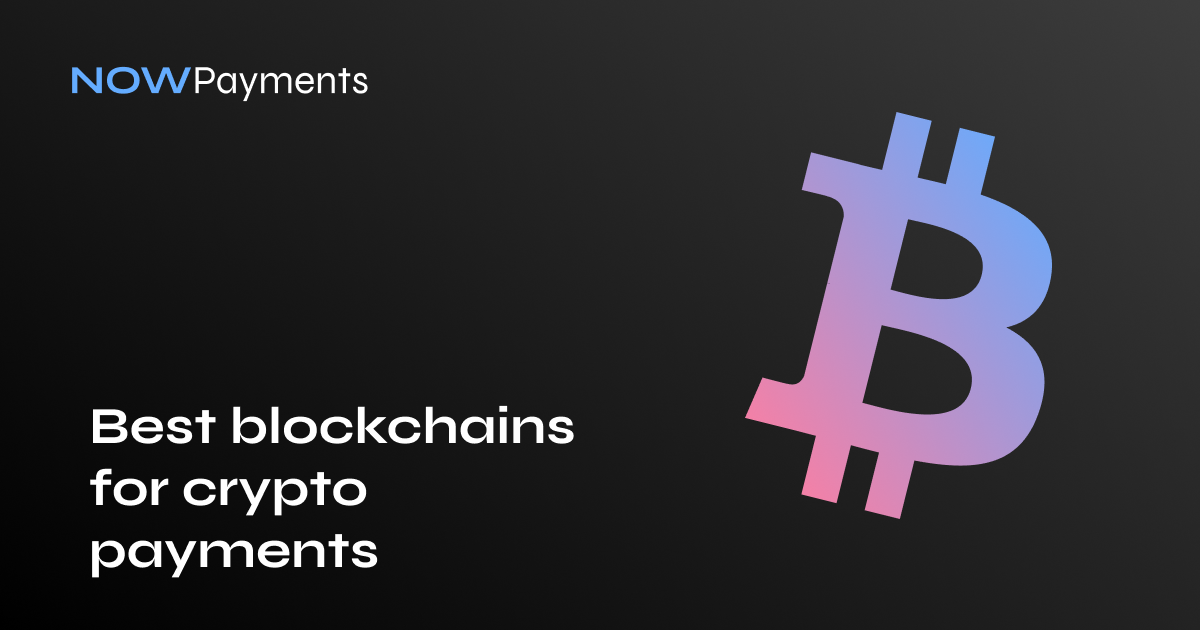 Crypto payments are becoming an integral part of our lives. More and more often, we come across ads “Bitcoin Is Accepted Here”. But among such a variety of cryptocurrencies & available blockchains, several diamonds are the most ideal for payments. We invite you to find out why some blockchains are better suited for payments and who these “A” students are.

Blockchain is a kind of database representing an unbreakable chain of blocks and is located on thousands of devices simultaneously. A block is a number of records (transactions) collected, packed together, and verified. Blocks are stored in a sequential chain, one after the other, in the order of addition. That is why the technology got its name — blockchain.

Each block contains information not only about itself but also about the previous block. So you can get from the last block to the very first and restore the entire chain.

Why are certain blockchains fit for payments better?

To understand this issue, it is enough just to study the functionality provided by various cryptocurrencies. As we remember, the first Bitcoin cryptocurrency was created precisely as a peer-to-peer online currency. The goal of Bitcoin was to become a digital asset with which you can easily, quickly, and without intermediaries exchange funds 24/7/365. But if we take, for example, the second most popular cryptocurrency Ethereum, its purpose is much more extensive. Naturally, due to the popularity of Ethereum, it is also successfully used for conducting crypto payments, but Ethereum is primarily a platform for creating smart contracts and decentralized applications. It is precise because of the different purposes that some blockchains are better suited for the field of payments than others.

Before proceeding to the question of which cryptocurrencies are best suited for payments, it should be noted right away that we do not include Bitcoin in the list. As we have already said, Bitcoin is indeed the first cryptocurrency that was created with the aim of becoming a secure, cost-effective, and faster replacement for traditional payment systems. Bitcoin is still the most popular payment method and is leading in terms of mass adoption. However, due to such popularity, the Bitcoin blockchain is often overloaded, which leads to higher fees and low transaction speeds.

What are the best blockchains for crypto payments?

XRP is a digital payment system whose main goal is to form a chain of direct asset transfers in real-time, which provides a cheaper, transparent and secure alternative to existing transaction methods, like bank transfers, PayPal, and others. A decentralized XRP blockchain is one of the best choices for merchants that wish to accept crypto payments as it allows fast and cheap transactions.

TRON is a widely used blockchain platform that allows developers to create efficient and fast decentralized applications. Due to its reliability and scalability, the TRON blockchain has become popular for issuing tokens. Tokens in the TRON network operate based on the TRC20 standard, similar to ERC20 in Ethereum. Most of the well-known tokens, mainly stablecoins, function in two networks at the same time. TRON blockchain has advantages over Ethereum as it allows for fast transactions with near-zero fees. So, for example, transactions with USDTTRC20 will be much quicker and cheaper than with USDTERC20.

Litecoin is a payment cryptocurrency that was created in 2011. This is one of the most popular cryptocurrencies that has occupied its niche in the field of commerce. To date, more than 4,000 merchants around the world accept Litecoin as a means of payment. The success of this cryptocurrency is due to the fact that it is a “lite” version of Bitcoin. Litecoin blockchain allows you to send almost instant payments and also has near-zero fees.

Cosmos is a decentralized and secure platform that allows blockchains to interact with each other. To date, it is the leading platform in its industry, and the Cosmos SDK is used by hundreds of other well-known projects. In addition, Cosmos blockchain is environmentally-friendly, as it operates on a Proof-of-Stake. Cosmos is also one of the fastest (7 seconds transaction completion) and cost-effective ($0.01) blockchains.

Another old-timer — Monero, was launched in 2014. The main advantage of the Monero blockchain is privacy-oriented and secure. Monero is perfect for the adult industry since, with the help of its blockchain, no one will ever be able to find out to whom, who, and for what sent funds. Jokes aside, Monero is the best choice if you need untraceable, fast, and inexpensive transactions.

Hedera Hashgraph is a popular platform that allows businesses to easily and quickly deploy microservices and decentralized applications. Hedera blockchain utilizes a specially developed Hashgraph consensus mechanism that allows lightning-fast and low-fees transactions. If in numbers, Hedera is able to support more than 10,000 TPS with an average fee of $0.0001. This makes Hedera one of the best choices for commerce, as well as an excellent tool for micropayments.

Elrond is a blockchain platform for building high-performance and secure decentralized applications. The developers have implemented a number of innovations to provide Elrond blockchain with high scalability, speed, and security. The two key technologies of the platform are Adaptive State Sharding and Secure Proof of Stake consensus mechanism. Thanks to this, Elrond is able to support about 15,000 TPS and a $0.001 transaction fee.

Being a fork of Litecoin, Dash is also a payment cryptocurrency, which is distinguished by rocket-fast transactions. In addition, Dash can also boast of its extremely low fees. Dash is an extremely secure blockchain that utilizes a two-tier network to confirm transactions (the X11 hash algorithm and the Proof of Service consensus mechanism). An exciting feature of Dash is its additional functions: InstantSend and PrivateSend.

Probably nano should have been put in the first place, but we started from the cryptos with the highest market capitalization, so we will leave it as it is. Nano blockchain is the best choice for those merchants who want to provide their customers with the opportunity to send free transactions. Yes, it is one of the few blockchains that does not have transaction fees and is lightning-fast. In addition, the nano functions in accordance with ISO requirements and is environmentally efficient.

In this article, we have reviewed the ten most suitable blockchains for fast, cost-effective, and secure payments. Each of them has both similarities and some unique features. For example, some have an extensive and dedicated community, some are incredibly safe and eco-friendly, and some allow transactions without paying fees. NOWPayments provides the widest selection of crypto to use as a payment method so that you can choose the one that perfectly suits your requirements.