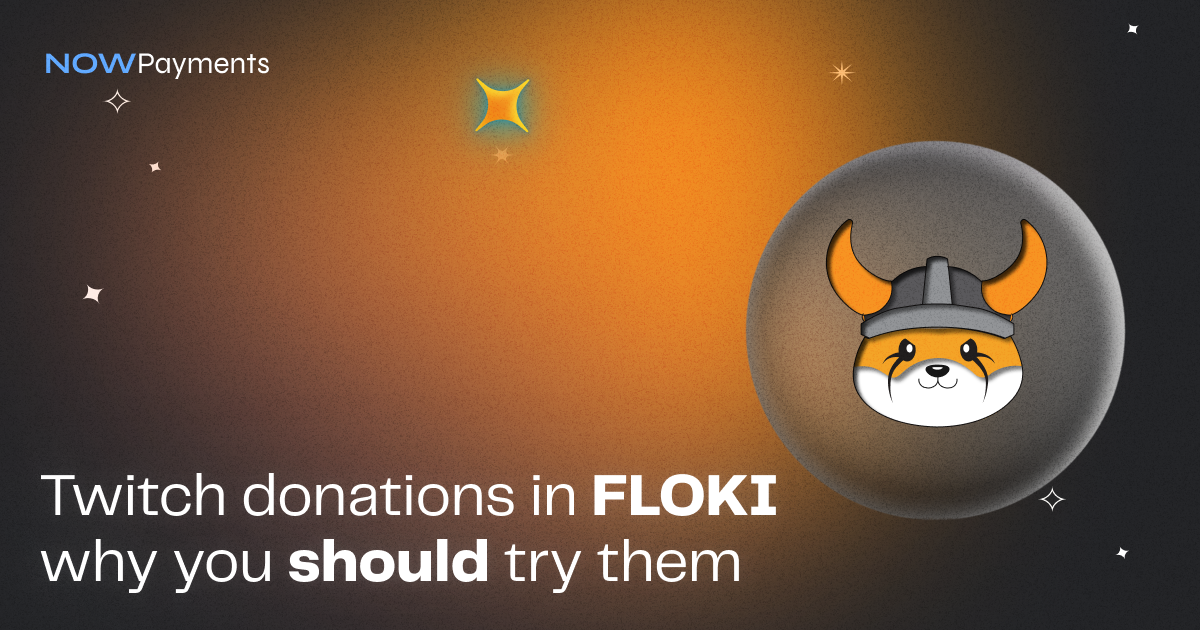 The FLOKI coin combines memes and utility. The FLOKI cryptocurrency defies meme-coin stereotypes by providing users with actual value. FLOKI has built a complete ecosystem of products, including an NFT marketplace and even its own game called Valhalla. These products enhance FLOKI’s value and provide investors with numerous opportunities. Twitch streamers have much to gain from the rise of FLOKI since the project is deeply rooted in the gaming world and has a dedicated community of gamers who play Valhalla. NOWPayments enables Twitch streamers to begin accepting FLOKI coin donations using a special donation button.

As mentioned above, Twitch is one of the key platforms for the entire FLOKI community. Floki has an official Twitch channel where the project’s team is streaming Valhalla gaming sessions. The project also conducts educational streams and NOWPayments had the privilege to participate in one of them. FLOKI’s streams always attract a great deal of attention from the community and Twitch users in general. Essentially, Twitch is the place where thousands of FLOKI community members can be found which is something Twitch streamers need to take into consideration.

How FLOKI benefits every Twitch streamer?

Get the attention of the FLOKI community

The FLOKI community consists of tens of thousands of FLOKI Vikings, people who hold the coin in their wallets and have no intention of simply making a quick profit by trading it on exchanges. The FLOKI community understands the value FLOKI has to offer to every person in the crypto sphere. This is why, FLOKI investors like to actually put their coins to use, including by utilizing them as a standard means of payment.

Twitch streamers can create a new use case for FLOKI by deploying FLOKI donations. Such a move is guaranteed to draw the attention of FLOKI holders to their personalities and the content they create. So, if you have a Twitch channel, one of the easiest ways for you to increase your average number of viewers is by placing a FLOKI donation button on our page. FLOKI Vikings greatly appreciate every contribution to the project’s widespread adoption, and when an influencer deploys FLOKI crypto donations, they do exactly that – they create a new use case for the cryptocurrency. So, many FLOKI coin holders will be eager to thank you by watching your content and donating to you in their favorite cryptocurrency.

Valhalla is a game created and released by the FLOKI project. At first, you may think that it is a conventional game, which are put out in hundreds every other day. Yet, you will be totally wrong, because Valhalla is a next-gen title which is much more than a video game. In fact, it is a full-blown NFT metaverse that makes full use of the FLOKI coin. It is an innovative project which is part of the rapidly rising trend for metaverse games. As a Twitch streamer, you have a one-of-a-kind opportunity to become an early adopter of metaverse games by playing FLOKI’s Valhalla. Moreover, featuring FLOKI coin donations may add a hell lot of credibility to your personality in the metaverse gaming community and, once again, help you get noticed by thousands of metaverse fans.

Inspire your community to help those in need

FLOKI donations can enable Twitch streamers to become a force for good. All Twitch influencers have a chance to assist the less privileged by donating to charities and raising funds for certain causes. FLOKI donations are a great solution in such situations because it is a completely transparent coin. Basically, by accepting donations in FLOKI, streamers will be able to demonstrate to everyone the information about how much money has been raised and how it has been spent. This is due to the fact that FLOKI transactions and addresses are public. So, information about them is available to anyone interested in viewing it. The FLOKI community is one of the most generous ones in the industry so many of its members will certainly support Twitch streamers’ fund-raising campaigns featuring FLOKI donations.

FLOKI donations are also an effective means of growing your community on Twitch by making it truly international. The thing is that FLOKI transactions are borderless and do not require users to undergo any registration or KYC procedures. This makes them stand out when compared to traditional donation methods such as PayPal. So, FLOKI donations are accessible to every person on the planet, as long as they have an internet connection. A simple donation method in the form of FLOKI can provide you with a real boost in terms of growing a global audience.

How to set up FLOKI donation button?