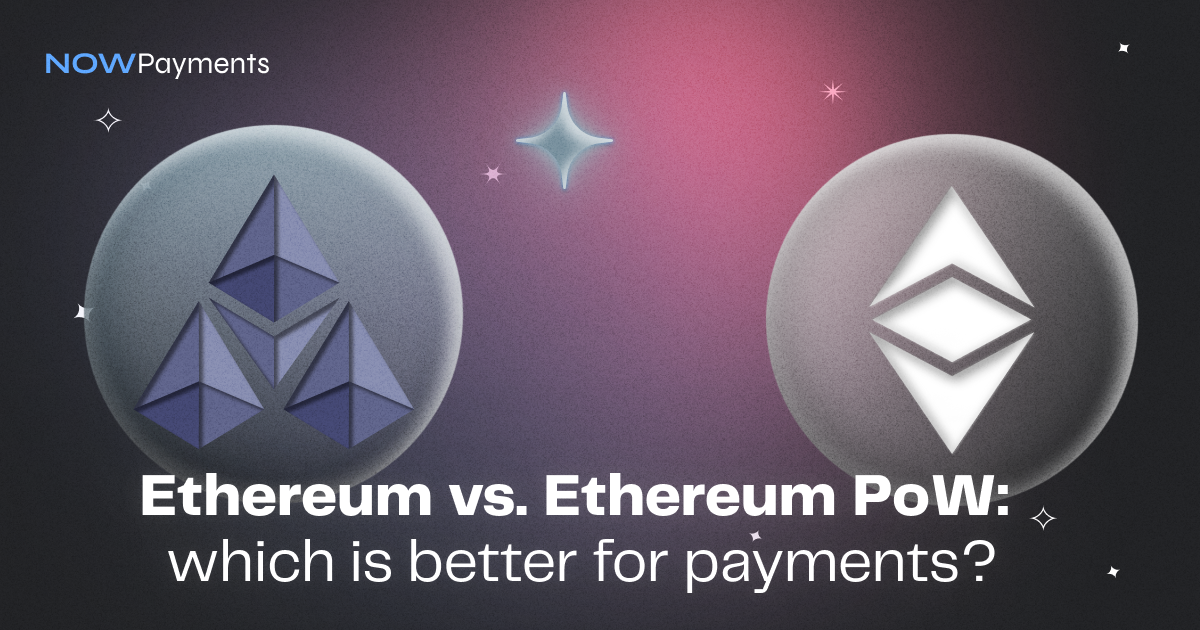 A historic event took place in the blockchain industry. The Ethereum network switched to the Proof of Stake algorithm. However, the miners were unhappy about this turn of events and decided to create a fork of Ethereum that adheres to the original, Proof of Work concept. What came out of this, and which asset should be considered as a better payment option? Read on.

Ethereum is the second-largest cryptocurrency and the leader in decentralized applications. Over the years of its existence, Ethereum has become the most popular blockchain ecosystem on the market. More than 90% of the existing dapps run on the Ethereum blockchain.

Until 2022, Ethereum worked based on the Proof of Work consensus algorithm. That is, miners were needed to confirm and add transactions to the blocks. Due to the high popularity, the network faced incredible congestion, which led to increased fees and slow transactions. The Proof of Work consensus algorithm became critically energy-intensive and did not allow implementation of the updates necessary for scaling. As a result, Ethereum developers decided to switch to the Proof of Stake mechanism.

After the transition, the Ethereum blockchain faced a huge decrease in the issue of ETH. Thus, the ETH supply has become deflationary. The rate of issuing new ETH dropped by almost 90% after switching to PoS. In addition, the deflation of Ethereum has also increased due to the London update, as a result of which part of the transaction fees is burned.

According to the developers, the further updates of Ethereum allows it to achieve a bandwidth of 100,000 transactions per second with near-zero fees.

What is Ethereum PoW?

Ethereum PoW is a hard fork of the Ethereum blockchain with the Ethereum Merge. The project has emerged quite recently. Its main goal is to preserve the usual way of mining ETH using video cards. The development team calls itself ETHW Core. It is claimed that it includes crypto investors and techies who wish to follow the original, Proof of Work vision. According to the statements of the Ethereum PoW project team, Ethereum contradicts the basic concept of cryptocurrencies — decentralization, because the validators who have the largest number of tokens get power over the network.

The ETHW network duplicates the original Ethereum blockchain. At the same time, developers do not have such a financial base and competencies as Vitalik Buterin’s project. This means the functionality will be reduced, and well-known developers may not come to the blockchain in question.

Currently, the following features of Ethereum PoW can be noted:

What is the difference between Ethereum and Ethereum PoW?

Ethereum was created in defiance of Vitalik Buterin and progressive thinkers who believe energy efficiency is essential. As a result of such an event, there are three main versions of Ethereum today: Ethereum PoW, Ethereum (PoS), and Ethereum Classic (also PoW). The lion’s share of investors, developers, and users remained on Ethereum PoS, as a result of which Ethereum PoW faced the problem of depreciation. What are the main differences between the two forks?

Which is better as a payment tool?

To date, Ethereum remains the market leader. Firstly, Ethereum PoS has the global support of the community, investors, and developers. In addition, the project team has a longer and more successful experience developing a smart contract blockchain.

Ethereum PoW is supported only by inveterate supporters of the Proof of Work consensus mechanism, as well as numerous miners who do not want to lose their jobs. Thus, in terms of popularity, ETH remains a more popular payment option than ETHW.

It should also be noted that the transition of Ethereum to PoS consensus will lay the foundation for introducing more powerful updates that will make transactions faster, cheaper and more reliable for the entire network and applications built on Ethereum. According to the developers, the Ethereum network will have a bandwidth of 100,000 TPS while remaining safe and cost-effective.

On the contrary, Ethereum PoW has also adopted the disadvantages of the original version — problems with scalability and slow and expensive transactions.

For this reason, many crypto payment providers set different minimum payments for the coins in question. The minimum payment amount is the main point when choosing a means of payment because if, for example, you sell a dress for $1, and the minimum payment for the asset is $2, you will not be able to accept it for payment. As for NOWPayments, given the listed circumstances, our service provides the following amounts of minimum payments (as of October 25th, 2022):

It is also important that with the transition to the PoS, Ethereum has become a deflationary asset — the rate of issuance of new ETH has decreased by 90%, part of transaction fees is burned, and part of ETH is locked in staking. Ethereum PoW does not use a burning mechanism, and new coins are issued many times faster, which will negatively affect the value of the coin.

How to accept Ethereum/Ethereum PoW payments?

NOWPayments enables merchants to accept ETH/ETHW payments in a secure and cost-effective manner. Our service is non-custodial. That is, payment takes place on a wallet-to-wallet principle. NOWPayments only charges a small fee for its payment processing services, after which the profit is sent to the merchant’s wallet. You can accept ETH/ETHW payments using one of the integration tools:

API. NOWPayments provides a lightweight crypto API that allows merchants to accept crypto payments anywhere on the Internet. Our API allows merchants to set up Instant Payment Notification, as well as provide their customers with the ability to pay for an order in several payments (for example, part in BTC and part in ETH/ETHW).

Invoices. NOWPayments allows merchants to issue custom invoices that can be placed in an online store or sent directly to their consumers. The invoice contains all the details necessary for payment: the merchant’s address, currency, and amount.

Billing. NOWPayments allows merchants to bill their consumers from all over the world. Thanks to this, customers who subscribe to your service can use your services without having to be involved in further payments.

Point of Sale Terminal. Thanks to NOWPayments, owners of brick-and-mortar stores can accept crypto payments right at their checkout. It is enough for a merchant to simply enter the amount of the goods and issue an invoice for the customer.

To start accepting borderless and charge-back free crypto payments, you need to follow these steps:

Ethereum successfully passed through the long-awaited upgrade and was transferred to a new consensus algorithm. From now on, Ethereum will be a much more environmentally friendly network, and the ETH can, in fact, be considered a deflationary asset. With the introduction of sharding, Ethereum will receive an incredible bandwidth of 100,000 TPS along with minimal fees, making it one of the best payment options.