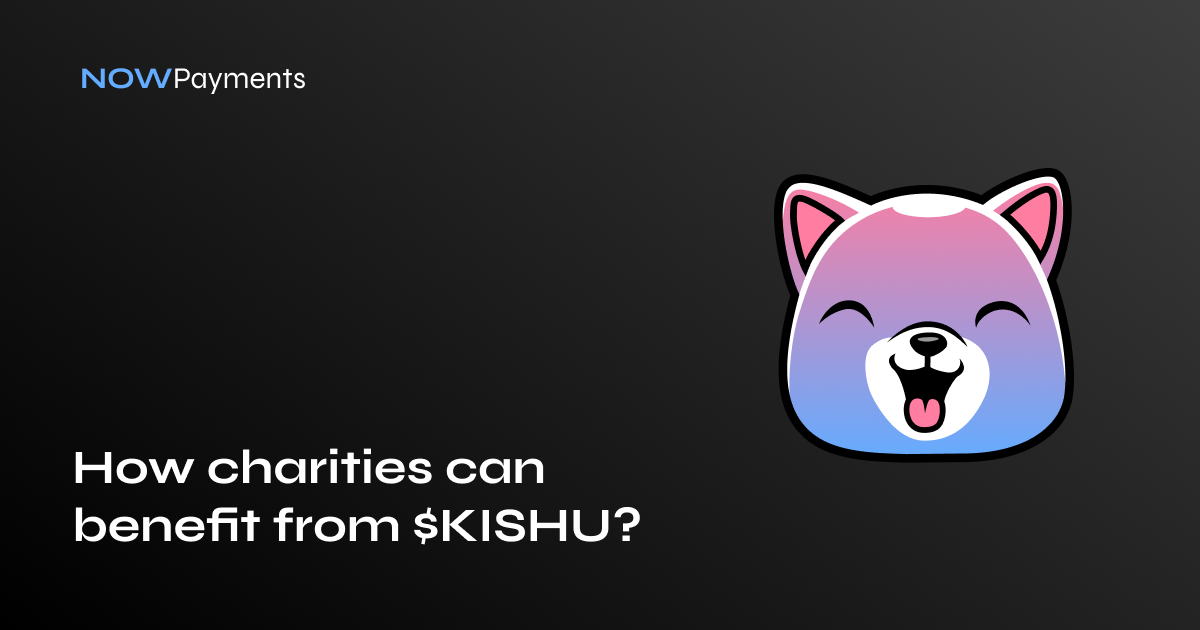 In order to obtain the necessary funding, charities need to be flexible and adjust their operations to the current trends. Cryptocurrencies are an integral part of today’s economy, and many charities seem to recognize this fact. This is why there is a rise in the number of charities that accept Bitcoin and Ethereum donations. At the same time, quite often, the most progressive non-profit organizations fail to offer people a wide selection of crypto payment options. NOWPayments helps charities to expand their list of crypto donation methods. One of the hottest cryptocurrencies that every charity needs to feature is KISHU.

What are top charities accepting crypto

Save the Children works every day to give children a healthy start in life, the opportunity to learn, and protection from harm around the world. When crisis strikes and children are most vulnerable, Save the Children are always among the first to respond and the last to leave. The organization does whatever it takes for children – every day and in times of crisis – to transform their lives and the future. The charity was established more than a century ago and was the first global organization devoted solely to serving children’s needs and securing their rights. The founder of the organization, Eglantyne Jebb, saw children dying of starvation and being wracked with diseases after the end of the First World War. So, in 1919, she launched the Save the Children Fund to raise funds to help children in war-torn Europe. Save the Children accepts a long list of cryptocurrencies, but KISHU is not one of them.

The mission of the Rainforest Foundation is to support indigenous and traditional peoples of the world’s rainforests in their efforts to protect their environment. Additionally, the organization helps native people to fulfill their rights by assisting them in securing and controlling the natural resources necessary for their long-term well-being and managing these resources in ways which do not harm their environment, violate their culture, or compromise their future. The organization is committed to​ developing the means to protect native peoples’ individual and collective rights and to obtaining, shaping, and controlling basic services from the state. The foundation understands the significance of cryptocurrencies for modern charities and accepts many of them as donations.

UNICEF is one of the most prominent charities in the world. It is the United Nations Children’s Fund which works in the world’s toughest places to reach the most disadvantaged children and adolescents. The fund protects the rights of every child, everywhere. UNICEF is one of the world’s largest providers of vaccines, and it supports child health and nutrition, safe water and sanitation, quality education and skill-building, HIV prevention and treatment for mothers and babies, and the protection of children and adolescents from violence and exploitation. UNICEF works in more than 190 countries and territories and in the world’s toughest places to reach the children and young people in greatest need. UNICEF has its CryptoFund. It is a new financial vehicle allowing UNICEF to receive, hold, and disburse cryptocurrency. The donations are made in Bitcoin and Ether only.

Children International is a top-rated humanitarian organization focused on ending generational poverty through a proven approach. Over the past 80 years, the charity has developed a high-impact methodology that empowers children and youth to break free from poverty. With the support of its donors, children receive access to health care, educational resources, and life-changing programs in safe, clean spaces. Children International allows people to donate in crypto.

How can charities benefit from KISHU?

KISHU transactions are borderless and are not limited by jurisdictions. The lack of major restrictions allows KISHU transactions to get processed quickly. Moreover, it does not matter how long the distance between the sender and recipient and where they live. All that matters is the connection to the internet and willingness to engage in crypto transactions. Charities that want to facilitate the donation process for people from all over the world can offer KISHU as a universal donation method available to everyone. KISHU can turn the process of making a donation into a pleasurable and easy experience.

One of the greatest assets of KISHU is the community that supports it. There are thousands of people who use KISHU every day and genuinely care about the development of the project. This is why the KISHU community welcomes every new use case for their coin and is happy to support it in every way possible. By accepting KISHU, charities may attract a sizable share of the KISHU community members and inspire them to donate their KISHU coins to a good cause. The crypto community, in general, is known for its charitability, so the more cryptocurrencies charities decide to feature, the more potential donors they may attract.

The Ethereum blockchain which hosts KISHU is anonymous, meaning that it does not require users to disclose any private information. It is also decentralized, so all transactions involve only two people, the sender and the recipient. So, every KISHU transaction is peer-to-peer. When donating to charities, some people may prefer to protect their confidentiality. Yet, the mainstream donation methods such as bank transfers are not private. Therefore, charities need to look elsewhere to seek an anonymous donation method. KISHU is a perfect privacy-preserving donation option for all charities.

Transparency is an inherent part of charities. Organizations that receive donations have to keep their activities, especially financial ones, open to the public and their donors. KISHU is deployed on the Ethereum blockchain, which is completely transparent. This means that users can see information about every single transaction and crypto address. Such a feature can be used by charities to their advantage. Basically, charities can boost transparency by letting everyone see how much donations they have collected and how the money is spent. Essentially, KISHU donations enable charities to keep the information about their income and spending public.

How to accept KISHU donations

If you want to begin accepting KISHU as a donation, you can follow these simple steps:

2. In your Account, find Store settings. If you haven’t used NOWPayments yet, add your KISHU wallet address.

3. In Store Settings, click the “Add a new key” button and generate your API key for the donation widget or button.

4. Paste the key in the special line here for the widget and here to add a donation button. Then copy the code from the section below and put it in your web page code.

KISHU is a great choice for charities wishing to integrate crypto donations. NOWPayments enables charities to accept KISHU as donations.