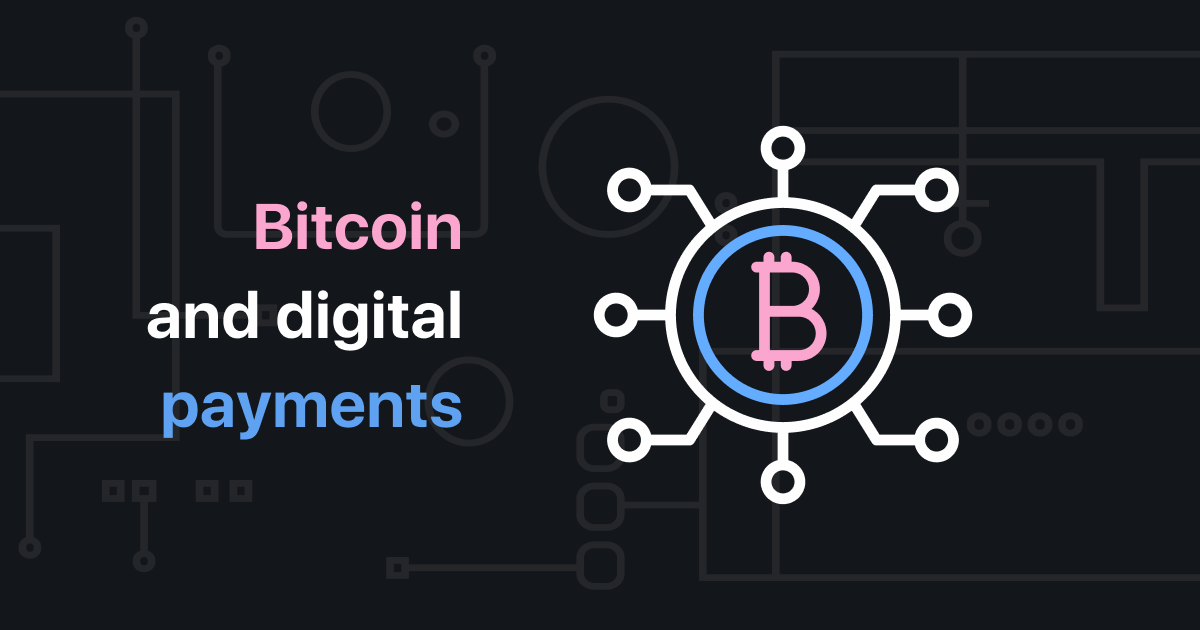 The history of mankind has seen quite a few ways of exchanging value. From bartering to gold standard, we gradually came to using cash and credit cards. The further we go, the more digitalized our money exchanges become.

When the concept of Bitcoin payments was introduced to the public, a group of enthusiasts immediately picked it up, and motivated developers began working on advancing the network.

The idea of being your own bank and sending direct money transfers to your friends and businesses with minimal fees is highly relatable to anyone. Freedom from banks and other financial institutions is also very attractive. Private yet transparent, cryptocurrency payments have all the chances to revolutionize cross-border transactions, lending services, and other financial operations we engage in.

Bitcoin made a long way from being called “a bubble” to modern-day reality where big corporations are exploring the digital currency en masse, like PayPal or Tesla, mainstream investment banks are setting up Bitcoin funds, and governments are planning on issuing Central Bank Digital Currencies.

So is Bitcoin the future of currency? How do you accept Bitcoin payments?

A Bit of Theory

Bitcoin is a digital currency powered by blockchain tech and peer-to-peer validation. Not controlled by anyone and completely transparent, Bitcoin’s blockchain holds a record of all the transactions ever made within the network. It can be compared to a chain of blocks that cannot be tampered with.

Bitcoin’s blockchain runs on the Proof of Work algorithm. Transactions are verified and added to the blocks by miners. Miners solve complex math problems and whoever gets to solve one first gets a chance to form the block and collect their reward – a predefined number of Bitcoins. Right now the reward is 6.25 BTC, but it used to be higher. Every 210 000 blocks the reward is halved, and it will continue to reduce until the total supply of 21 million BTC is minted.

Today you can already use Bitcoin to pay for goods and services both online and offline, use it as an investment tool, and even as a store of value. Despite high volatility, in some countries – for instance, in Venezuela – it is less risky to keep your saving in BTC than in national currency.

The key benefits of paying in Bitcoin include:

Control over your funds

Unlike banks and other financial institutions, nobody can freeze or arrest your account. If you keep your money in the non-custodial wallet and follow basic digital safety rules, your funds will always stay inaccessible for anyone but you.

Just like with cash, Bitcoin purchases are private. Although it is not impossible to connect Bitcoin’s address with its owner, it will take a certain amount of resources and effort. In general, BTC transactions are way more discrete compared to credit card ones.

If you’ve ever tried to send money overseas, you know how painfully complicated it can get. Apart from paying high commission fees, the majority of international payments are very slow.  With crypto, you can pay a few cents for transferring millions worth of assets anywhere you want, and it will only take a few minutes.

Being free from the traditional banking system also means that you don’t have to pay any commissions and fees for account maintenance, overdraft charges, and others.

In a world where 1.7 billion people don’t have access to personal banking, cryptocurrency can become a lifesaving alternative. All you need to start using the advantages of crypto is a smartphone.

As for the drawbacks, Bitcoin is highly volatile and its transactions are irreversible, which means that if somebody manages to steal your money, there won’t be an easy way to get them back. Frankly speaking, the technology behind Bitcoin is not the most advanced and plenty of other altcoins are outperforming BTC in terms of speed and overall usability.

Nevertheless, the possibilities that Bitcoin and other cryptocurrencies can offer to improve the way we handle our money are truly endless. However, to start building a new economy we still need to wait until our governments give it a green light. It’s not yet clear whether the authorities’ approval will be a good thing.

Although a growing number of countries are now taking crypto seriously and passing regulations, it is just the beginning of the journey. And it is very possible that governments will eventually come up with their own version of digital currency, taking the best of the blockchain tech and yet attempting to stay in control of the upcoming digital economy.

Today China, Russia, EU countries, and many others are either seriously considering of switching to the Central Banks’ Digital Currencies (CBDCs) model or already working on issuing their own coins. On the one hand, it sounds great. Central Banks’ Digital Currencies can help with reducing expenses when transferring money, providing access to banking to those who are still unbanked, add more transparency to the current monetary system, and fight illegal activities more efficiently. So there’s a chance that it won’t be Bitcoin that becomes the future of digital payments.

On the other hand, Central Banks’ Digital Currencies will never beat cryptocurrencies in terms of freedom and decentralization. Realistically, you don’t need a blockchain to issue a currency, but you can use some of its best elements to create a stable centralized digital asset. And that’s what governments are after. The other downside of Central Banks’ Digital Currencies is that people might pull all their money out of banks causing a huge distress to the whole system.

A compromise would be to make all Central Banks’ Digital Currencies interoperable so that they would smoothly interact with each other and with cryptocurrencies too.

Is Bitcoin the future of digital payments? The digital currency has already made a huge impact and set the direction for the development of our financial and economic system. Even though authorities are still unsure of how to fully regulate the crypto space, they are flirting with the idea of issuing their own digital currencies.

One of the positive scenarios is to make the government coins and cryptocurrencies interoperable and let people get the best of both worlds. At the end of the day, cheap, fast, and accessible money transfers is what we’re after. And thanks to Bitcoin, we’re already getting closer to this goal.