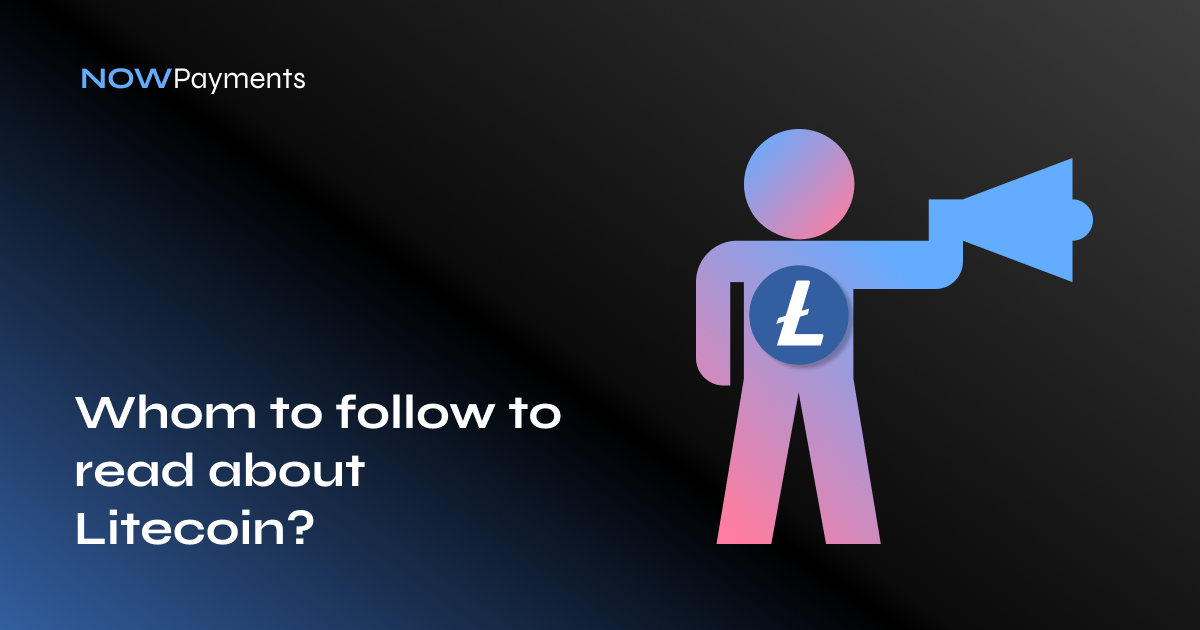 Litecoin has built a great legacy in the crypto world thanks to its superior technology and excellent infrastructure that supports this highly-efficient network. From the very beginning, Litecoin ensured that it had a great community willing to support the project. Today, there are thousands of people who not only hold Litecoin but also actively promote the coin on social media. The most popular of them have turned into real Litecoin influencers, and their perspectives have a lot of weight in the community. Check out the list of the coolest Litecoin influencers whom you can follow on social media.

What is LTC crypto?

Litecoin is a peer-to-peer digital currency that was designed as a reliable solution for payments. Litecoin lets users make crypto transactions and send LTC to anyone in the world in a fast and low-cost manner. Litecoin is an open-source project that welcomes developers to contribute to its development. Compared to its competitors, such as Bitcoin, the Litecoin blockchain is capable of handling higher transaction volume. Basically, Litecoin is the perfect network for businesses that want to accept crypto payments.

Who are the best Litecoin influencers?

Charlie Lee is the creator of Litecoin and is currently the director of the Litecoin Foundation. Charlie is the most important person in the project, so it is reasonable to follow him on Twitter if you are an LTC investor and wish to stay informed about the latest developments in the Litecoin ecosystem. Charlie is generous with the community, so he often posts real insights about the project. You can read this amazing thread from Charlie on the history of Litecoin from the perspective of the coin’s creator.

Xinxi Wang is a co-founder and the Board Director of the Litecoin Foundation. Xinxi is another person on the list who is extremely knowledgeable about Litecoin and knows about practically every aspect of the project. Xinxi frequently shares his knowledge with followers, so you can learn a great deal about LTC by reading Xinxi’s tweets. Xinxi is also the founder and CEO of Coinut Exchange, a secure crypto exchange. The exchange has a cool perk for Litecoin fans, namely, it offers free LTC for referrals.

Loshan is a developer at Litecoin and a real engineering wizard. Loshan is one of those people whom we all need to thank for the smooth experience on the Litecoin network. Loshan’s Twitter account will be particularly interesting for die-hard fans of LTC who want to know every single technical detail of their favorite project. Loshan is one of the masterminds behind MWEB, the largest upgrade to the Litecoin network, which is supposed to improve LTC’s scalability. So, if you want to monitor the development of MEWB, you will need to follow Loshan.

Jon Moore, also known as Jonny Litecoin, is the most notable ambassador of Litecoin on Twitter. Jon is an avid supporter of LTC, and he makes sure that every person who reads his account falls in love with the project too. Jon generates tons of quality content about Litecoin and its ecosystem. For instance, you can check out his video on how to use MWEB.

Jon is a great person, and if you decide to follow him on Twitter, your Litecoin journey will definitely be more exciting.

Kong Trading is a trading expert who has supported Litecoin on many occasions. Kong Trading usually shares his thoughts about trading and posts his perspectives on the best options for investment in the crypto market. Litecoin is not the only coin Kong writes about. Yet, from his tweets, it is clear that he believes that LTC is a coin with great potential. Kong’s tweets always contain insights, and they will be perfect for other active crypto investors. Nevertheless, you should always remember that Kong’s tweets are not financial advice, you need to make your own judgments at all times.

Litecoin Moses is one of the biggest LTC influencers whose tweets about Litecoin frequently get dozens of likes. Litecoin Moses does a lot for the community by actively promoting LTC on social media. He even recorded a cool rap song about Litecoin, which got hundreds of likes and positive reactions on Twitter. Follow Litecoin Moses to never miss his creative ideas and content.

Litecoin Forever is one of the most prolific Litecoin influencers whose tweets always contain interesting information about LTC. Litecoin Forever’s Twitter is relevant for both ordinary LTC holders and Litecoin traders who track every piece of news about the network closely. Recently, Litecoin Forever noted that despite the unstable situation in the crypto market, the Litecoin hashrate reached its all-time high. Basically, Litecoin Forever should be on your following list if you care about what is going on with LTC.

Jay Milla is the Director of Marketing at the Litecoin Foundation. Jay really knows his craft and is, to a large extent, responsible for the popularity enjoyed by Litecoin today. Jay shares interesting insights about Litecoin and its engagement. Additionally, in his Twitter account, he makes announcements about important events for the entire Litecoin community. Recently he reminded his followers about the upcoming Litecoin Summit in October. So, follow Jay to read tweets of an actual Litecoin Foundation member.

Randy is another Litecoin influencer who is rooting hard for his favorite coin. Randy was among the first people to use the SPEDN app to spend his LTC on products. Check out his video where he paid for a lemonade slushy at Dunkin Donuts with Litecoin using the app. Randy is continuously investing in LTC, especially during the current dip. Randy’s tweets always get numerous likes and reposts, so follow him to get your daily portion of fun tweets about LTC.

Litecoin’s Official Twitter account is probably the first page you need to follow if you have LTC or plan on getting it in the near future. It is the place where you can get information practically about everything you need to know about Litecoin. It occasionally posts curious facts about LTC. For instance, it turns out that to mine the entire supply of LTC, additional 120 years will be needed. The account also publishes many articles about LTC and other things related to cryptocurrencies. Basically, this Twitter account is your gateway to the world of Litecoin.

How to accept Litecoin as payment

Litecoin is one of the biggest crypto sensations of the past decade, which today is extensively used by thousands of merchants as payment. NOWPayments enables businesses to accept LTC payments.