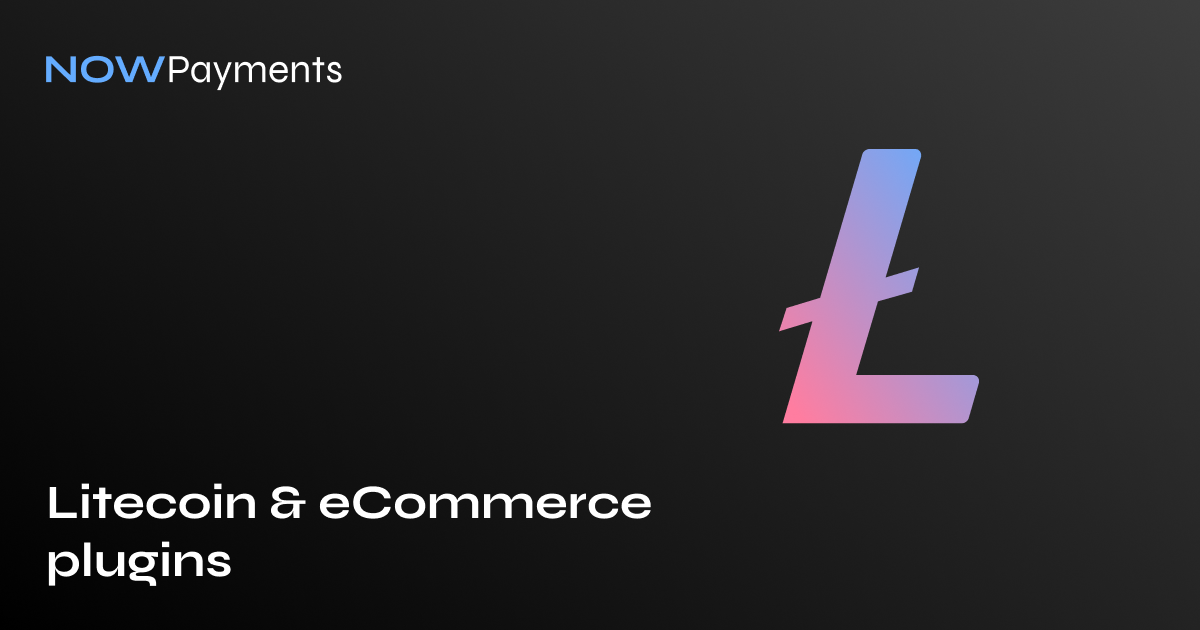 Litecoin is one of the most popular coins that has been around for more than a decade. A long-term presence on LTC has earned it a large army of investors and fans who use the coin for various purposes. Litecoin was intended as a more efficient alternative to Bitcoin, which ultimately made it a perfect choice for crypto payments. This is why there are thousands of stores these days that openly feature Litecoin as a payment method. Litecoin adoption is particularly common among online stores. If you run an eCommerce store and wish to deploy an LTC payment gateway, like many other merchants, you are welcome to use NOWPayments’ Litecoin payment plugins.

Litecoin is a peer-to-peer cryptocurrency that primarily focuses on the facilitation of day-to-day transactions of users. This means that Litecoin is made for payments. Litecoin can boast instant transactions and low fees and can be used practically by any person in the world with Internet access. Litecoin is also an open-source project, so there are hundreds of developers who work on making it better and more efficient every day. Like the majority of blockchains, Litecoin is a decentralized network that does not have one central authority. State-of-the-art cryptography secures the Litecoin network enabling users to control their own finances. Over the years of development and successful adoption, Litecoin has become a force comparable to Bitcoin.

Pros and cons of LTC payments

All business people are familiar with the necessity to strictly manage company expenses. Bank fees constitute a major expense for every business, and they can easily get out of hand and become outrageous. Cryptocurrencies such as LTC can be a perfect alternative to bank payments and other mainstream payment processing services since they have low fees. Specifically, one LTC transaction costs mere cents, which can help companies to save money. This is why featuring Litecoin payments is a reasonable way to cut expenses.

LTC transactions are also quick and do not take hours or even days like bank transfers. In fact, Litecoin can be transferred in a matter of several minutes. Moreover, the distance between the two parties does not affect the speed. So, LTC transactions are also perfect for international payments, especially for those companies that have many foreign clients and want to accelerate the payment process for them.

Since Litecoin was launched in 2011, it used Proof-of-Work, a consensus mechanism which was popular at the beginning of the blockchain industry. Nowadays, the PoW mechanism raises concerns of environmentalists who highlight that this technology is not environmentally friendly. At the same time, the impact of Litecoin’s network on the environment is not significant.

Litecoin, despite being an efficient cryptocurrency, still lags behind Bitcoin and Ethereum in terms of the scale of adoption and popularity among investors. So, featuring Litecoin only as payment may not be a sensible strategy due to the fact that many crypto investors do not keep it in their wallets. The right approach would be to make Litecoin one of several crypto payment options available.

NOWPayments’ PrestaShop plugin enables merchants that use this platform to accept Litecoin as payment. PrestaShop is a platform that has earned global recognition as one of the most reliable services for creating and managing online stores. PrestaShop has an interface which is extremely easy to navigate, so merchants can create their PrestaShop store in minutes. PrestaShop does not have geographic limitations and is available to merchants from all over the world. PrestaShop’s infrastructure is already used by hundreds of thousands of businesses that host their stores on the platform. Every PrestaShop store owner can easily start accepting Litecoin as payment using the NOWPayments plugin.

WooCommerce is another prominent platform used by numerous merchants. Thanks to NOWPayments’ plugin, all of them have an opportunity to feature Litecoin payments. WordPress is known for being an open-source service that allows users to create their custom solutions to expand the functionality of WooCommerce stores. WooCommerce is the official eCommerce platform of WordPress. WooCommerce lets merchants run their online store while having access to all the necessary tools. The NOWPayments plugin assists WooCommerce stores in adding more than 100 different cryptocurrencies as payment methods. Featuring LTC tokens as a payment option is a great way for any store to draw the attention of crypto investors and generate some hype.

Zen Cart is a shopping cart system which does not charge users any money. Basically, Zen Cart is free to install and use for everyone, so it is the perfect solution for smaller stores. At the same time, despite being free, Zen Cart does not have limited functionality. Zen Cart is an open-source project, so there is a host of contributors such as store owners, programmers, designers, and consultants who are continuously working on improving Zen Cart and making it better for everyone. The platform focuses on the particular needs of merchants. Therefore, Zen Cart can bring massive utility to its users. Zen Cart businesses can install NOWPayments plugin and start accepting LTC.

Shopify is the leading platform for eCommerce businesses which has 1,500,000 stores that utilize the platform worldwide. Shopify is simple, and it is easy to create and run stores using it. Additionally, Shopify does not require merchants to write code. Shopify also has a large selection of themes and store designs that merchants can install. NOWPayments provides Shopify stores with its payment gateway plugin, letting them accept LTC as payment.

Shopware merchants also have a chance to feature Litecoin payments using NOWPayments’ plugin. Shopware is a scalable platform that merchants can adjust to their needs. Basically, Shopware is equally ideal for both smaller stores and large marketplaces. Numerous customization features make Shopware perfect for those businesses that want to create unique stores. Shopware guarantees zero downtime to merchants. The cryptocurrency plugin from NOWPayments is fully automatic and processes all LTC payments without any assistance from merchants.

Plugins are a reliable tool for integrating crypto payments. NOWPayments’ plugins allow merchants to accept Litecoin and other cryptocurrencies as payment.