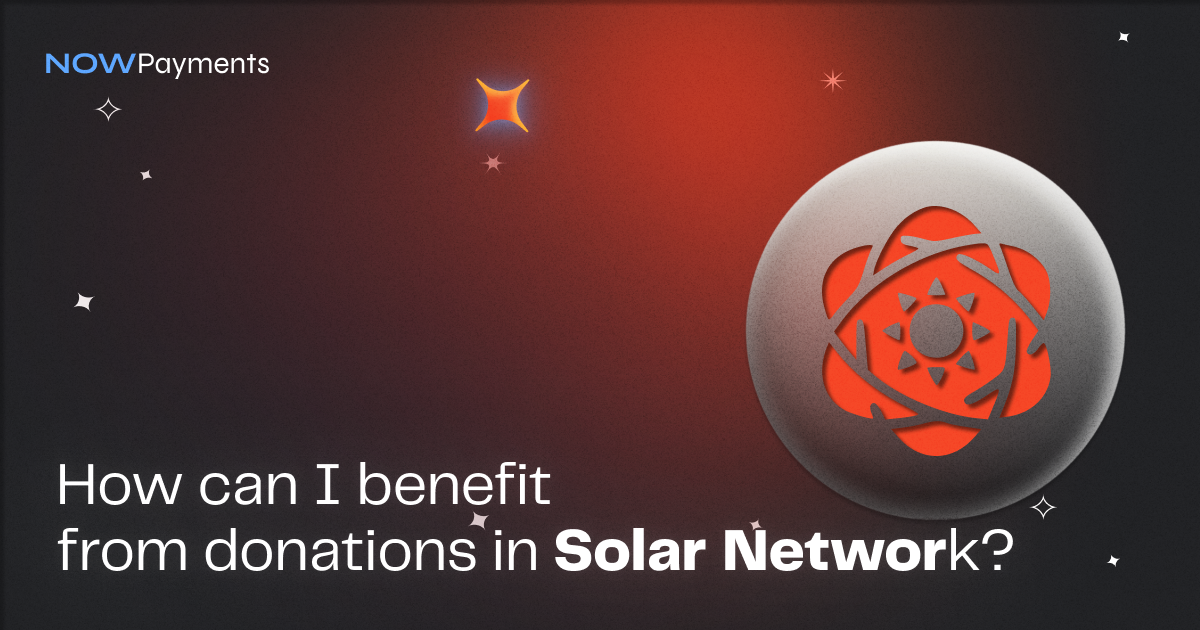 SXP has a truly fascinating story behind it since it is an asset which switched projects while being established crypto with a massive capitalization. Previously, SXP acted as the Swipe ecosystem’s utility token and existed on Ethereum and BNB Smart Chain. Yet, later it was turned into a governance currency of Solar, an innovative foundation powered by Solar Core, a secure Layer-1 Blockchain Framework. With its own blockchain, SXP will become an even more valuable asset. SXP is a versatile asset which can be used for donations. NOWPayments offers tools to assist organizations and individuals with the process of accepting SXP coin donations.

What is Solar Network?

Solar Network is a decentralized and community-driven blockchain project that focuses on creating a blockchain ecosystem with a variety of features and tools. For instance, Solar relies on the Delegated Proof of Stake (DPoS) Consensus powered by Solar Core. As a result, Solar is a sustainable, efficient, and fully decentralized blockchain. It does not have issues present in traditional Proof of Work (PoW) blockchains such as being energy intensive. SXP is the native token of the network. It is a multi-chain so it exists on several blockchains including Solar’s mainnet. You can generate your SXP address by downloading the official wallet of Solar.

Why you should accept SXP crypto donations?

The bulk of donations made by people and organizations do not reach the final destination in their entirety. The sole reason for it is the size of the fees charged by banks and other payment processing services. So, whenever you decide to donate to some charity you automatically get requested to pay a transaction fee, while the other party, at times, also gets subject to additional fees.

Subsequently, the initial sum after all the operations experiences a considerable reduction, depriving the recipient of the much-needed funds. Cryptocurrencies are a payment method that has cheap transaction fees. On average, SXP crypto transactions do not cost more than a few cents, thus letting users cut their fees and get larger donations.

Charities and other organizations and individuals that accept donations need to receive funding quickly since they always have a long list of expenses. The standard means of making donations often have lags and delays that complicate the entire process and waste a lot of time of donors and recipients.

In the case of charities working to solve urgent problems, a couple of hours can be a matter of life and death, therefore, they are in dire need of a fast solution for transferring money. SXP is one such solution. SXP coins can be easily transferred between users’ wallets in minutes. Moreover, the amazing feature of crypto transfers that makes them superior to the conventional methods is that they remain quick at all times, no matter how long the distance between the sender and the recipient is.

Online privacy has become a major worry for many individuals around the world due to the increase in the scale of Internet scams and hacks. The mechanisms of traditional donation solutions hardly correspond to the privacy and anonymity standards.

Moreover, they expose the private information of individuals using them to third parties. For instance, whenever people use bank transfers, their banks receive all of the information about these transactions, which, eventually, may end up in the hands of hackers. This is why it is reasonable for charities and individuals accepting donations to deploy cryptocurrency donation options such as the SXP coin. This way, people will be able to make private donations. They will also not be required to give their personal information or go through KYC procedures on sketchy websites to send an SXP donation.

Cryptocurrencies are, without a doubt, the future of the global economy, so do not let the current bear market fool you. The next bull run in crypto is expected to be fueled by governments and major financial institutions that will finally adopt crypto and thus will promote wider use of the technology.

At the same time, even today, there are millions of people ready to utilize their crypto funds on a daily basis, and this is the group charities can target. The SXP crypto serves thousands of people every day, so giving them a chance to spend their money on a good cause or quality entertainment through donations to charities and bloggers can be a solid idea. In other words, you can expand your fan base and attract more donors who use crypto and SXP in particular. Essentially, someone with SXP or another coin in their pocket will be delighted to support an influencer or a charity accepting SXP.

SXP donations are also a viable choice for charities to become truly global and reach out to billions of people around the world. This is because SXP transactions are borderless, which means that they can be sent from and to anywhere on the planet.

There are no geographical limits and restrictions imposed by jurisdictions, the SXP coin is international since it exists above any borders. Moreover, SXP donations are peer-to-peer, so there are no intermediaries participating in them which further boosts their efficiency. Thus, SXP transactions are performed instantaneously, regardless of where the two persons involved in them live. Additionally, SXP’s mainnet is extremely secure since it has implemented the latest technology in the sphere of blockchain, so it is not susceptible to attacks. As a result, you can be certain that your SXP coins will not vanish one day due to a hacker assault.

How can charities accept SXP donations?

NOWPayments is an SXP payment gateway that processes both payments and donations in the SXP coin. The service offers extra convenience to its partners and their clients, enabling them to greatly facilitate the entire process of accepting cryptocurrencies. In order to deploy SXP token donations, you can use one of the three tools:

Let’s take a closer look at how to create an SXP crypto donation link:

SXP donations are a reliable solution for accepting crypto donations. NOWPayments offers a range of tools for deploying SXP donations to charities and influencers.