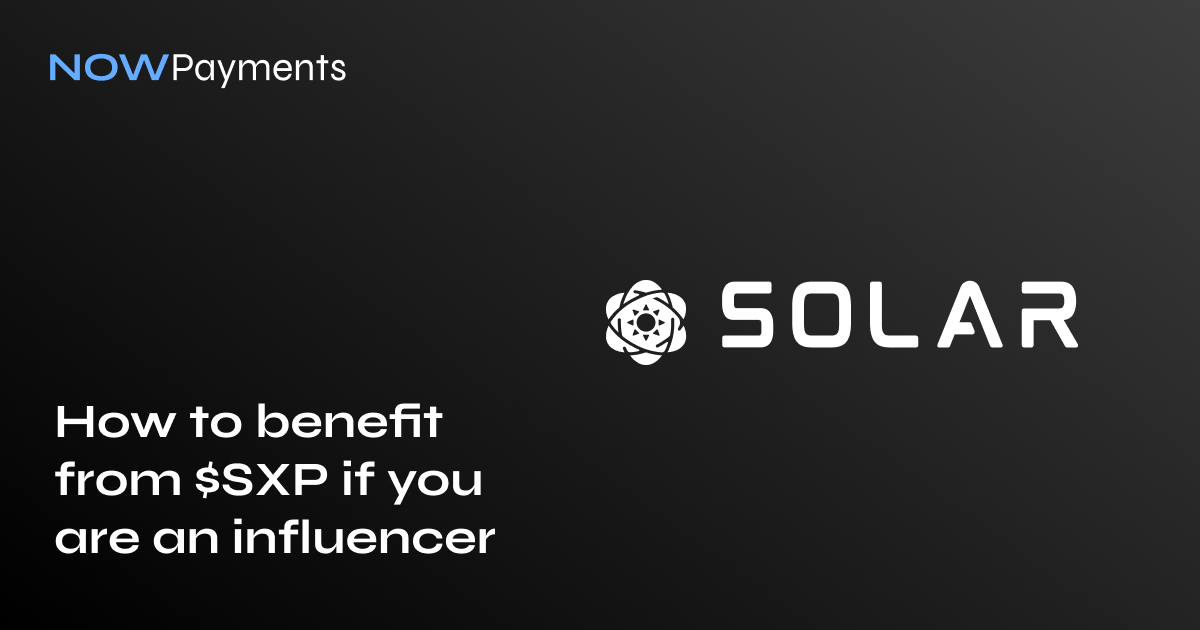 SXP is a cryptocurrency with an exciting history. Previously, SXP was the utility token of the Swipe ecosystem and existed on Ethereum and Binance Smart Chain. Nowadays, after going through a rebranding, SXP is the native crypto of the newly-created Solar network. Now that SXP has its own blockchain, it has become even more of a lucrative asset. SXP is especially relevant for people and organizations that want to accept crypto donations. NOWPayments offers tools for facilitating the process of accepting SXP donations.

As mentioned above, SXP used to be a part of Swipe. After being purchased by Binance, the Swipechain blockchain was rebranded to Solar. The new project has its own separate blockchain network which is now home to SXP. Solar’s value proposition enables plugins to be developed in Javascript and Typescript and built in Layer 1 formats so that all scalability and smart contract-like features will be developed natively. Side chains will enable other features.

Why use SXP for donations?

Although influencers often find many loyal fans, donations can be a rare treat. That is why every donation matters especially for those influencers for whom donations are the only stream of income. Fees eat into donations and take away a share of them, reducing the size of influencers’ income. Cryptocurrencies can solve this problem by lowering transaction fees and thus letting influencers get more money. At the same time, popular cryptocurrencies such as Ethereum still have relatively high fees. Therefore, it is reasonable for influencers to switch to coins such as SXP which have extremely low transaction fees. So, by featuring SXP donations, influencers will get more bang for buck.

Speed of donations is an important factor for many influencers and especially streamers. Donations enable streamers to communicate with their audiences and the delay in their communication should be as small as possible. Unfortunately, cryptocurrencies such as Bitcoin, despite being widely used for the purpose of donations, have long transaction confirmation times. At the same time, SXP transactions take only several seconds. This is why streamers, by using SXP as their donation method, will be able to reduce the delay in the communication with their fans.

Influencers often raise funds for different causes, be it a charity work or the need to purchase new equipment for their music studio. In such matters, transparency and accountability are the key. The traditional donation services cannot match the same level of transparency offered by cryptocurrencies. Nevertheless, there are also cryptocurrencies such as Monero which are not transparent. SXP boasts an excellent level of transparency since information about all of the SXP addresses is available online. As a result, influencers can enable their audience members to monitor how much funds have been raised for their projects through SXP.

No influencer wants to spend long hours on deploying dozens of payment options in order to provide every fan with a chance to donate to them. SXP can become that universal donation solution which every influencer needs. Compared to the mainstream donation methods such as PayPal, SXP does not have geographic limitations and does not require users to undergo KYC procedures. This means that influencers’ audience members can send SXP donations from any place on the planet and without any obstacles.

By deploying an SXP donation gateway, influencers create a new use case for the coin which can be exciting for a certain share of the investors. Moreover, unlike some of the less notable coins, SXP is a popular cryptocurrency and its community is expected to grow taking into consideration its new blockchain. So, it is possible that SXP donations will help influencers to attract some SXP investors and make them their fans.

How to accept SXP as payment

Influencers who have their own websites or blogs, such as writers, musicians, artists, and photographers, can deploy an SXP payments widget. The widget itself lets you feature as many crypto payment methods as you would like.

SXP constitutes a great donation material for influencers. NOWPayments offers a variety of tools influencers can use to accept SXP donations.