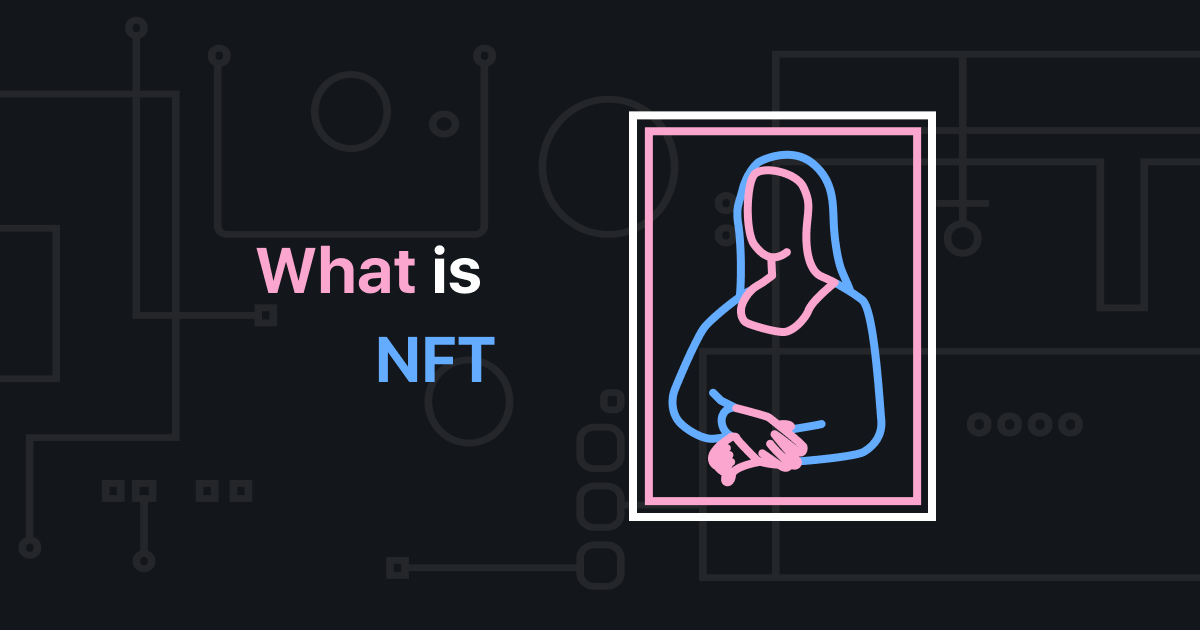 What does NFT mean?

In fiat currency, every US dollar is identical to another USD. In crypto, every Ethereum has the same value as any other Ethereum. This means that USD and ETH are fungible. Non-fungible tokens, or NFTs, are all unique and have different value — there are no exchange rates, and their price is only set by their owners.

NFT is a token that represents your ownership of a digital object: it can be an image, a video, a text, a Tweet, a digital artwork, land or property in a digital universe, a domain name, a ticket to an event, and much more.

How can an image or a Tweet be a cryptocurrency?

Remember how ICOs worked back in 2017-2018? You invest in a project and get some tokens that represent your share in this project. Similarly, NFT crypto represents your ownership of a digital object. It’s like when you have stocks, you own a part of the company — with the difference that owning an NFT token means owning 100% of it.

Your ownership rights are written in the blockchain in a form of a smart contract: NFT is a token that you store in your wallet, and no one but you has access to it.

Most of the NFTs are Ethereum-based tokens of two formats: ERC-721 and ERC-1155. While ERC-721 only supports NFTs, ERC-1155 is an upgraded version that allows for creating both fungible and non-fungible tokens, which adds more flexibility and reduces transaction costs.

Owning an Ethereum NFT means that you can store your token and view it in such wallets as Metamask or Trust Wallet.

Also, many new formats of NFTs are evolving today. TRON and EOS blockchains have introduced their versions of NFT.

One really unique format of NFT is built on the Ravencoin blockchain. Ravencoin is a Proof-of-Work cryptocurrency that emerged as a fork of Bitcoin, while Ethereum, TRON, and EOS have been originally designed as platforms for building dApps with their own tokens.

NFT can be easily built on Ravencoin. One of such platforms that allows to do so is called RVNFT. This platform not only allows you to create an NFT but offers a number of cool promotion features.

Everyone on the internet can easily copy images, videos and texts. In these conditions, how can you make any digital product unique and valuable?

The introduction of Bitcoin answered that question. The first cryptocurrency is a digital item with programmed scarcity — there will never be more than 21 million Bitcoins. The limited supply keeps demand high and, as a consequence, maintains high prices.

With the advent of such an algorithm, people in the industry realized: we can do the same but with any digital items! And this is how appeared the NFT meaning a new page in the history of crypto. From now on, you could create a digital item ensuring that you own it, and this can be securely proven by a record in the blockchain. Even though anyone can still download this item and paste it anywhere, you’re the one who owns the original.

At first, this algorithm worked well for digital collectibles. But then, people started to buy items in digital worlds, get unique digital NFT art, and much more.

I’ve heard people buy NFTs for crazy sums of money. Why would anyone do that if they can simply copy the item?

So why do people spend such crazy money on simple pictures?

Think of it as collecting. If you don’t collect postage stamps, you would probably surprise or condescendingly smile when someone buys one for $10,000. If you don’t like wine, a bottle for $5,000 would be to you as sour as any other one, while for a person involved, it can be of a high subjective value.

OK, you can’t download or copy a stamp and a wine bottle. But the fact that anyone can download a JPEG file makes it even better for the owner — they know many people are eager about this item but only they have the original. It’s like owning a real Mona Lisa painting instead of a replica that anyone can print and put on their wall.

Feels like these million-dollar deals have appeared from nowhere. Is NFT something new?

The mass audience has learned about NFTs no later than in February-March 2021, while in fact, they have been around since 2017. It’s like with Bitcoin: it was created in 2009, then there was slow growth, a boom in 2017 with the bursting “bubble”, and steady mature growth ever since. Now, NFTs seem to be in the middle of that 2017-like craze.

A good example showing the dynamic of NFTs are Cryptopunks. This is a project launched in 2017, where 10,000 unique pictures of punks were created and distributed among the community for free. After all cryptopunks got their owners, the latter started to sell the pictures — first for cents and dollars, then for more, and ultimately, one of the latest deals in December 2020 was at 4.9 ETH ($2.9K). Since the launch, 6.8K deals have been executed for the total sum of 77,990 ETH ($142 million).

In the last 2 years, the tokenization of non-fungible digital objects has brought up some new non-fungible tokens use cases: card games (Gods Unchained), virtual worlds (Decentraland), domain names on Ethereum (ENS), and traditional finance tools (yinsure). In 2020, NFT trading volume reached $250M, where tokenized art was 31%, and land in virtual worlds was 40%. In 2021, we are to see much bigger numbers as major players from the art world have joined the race.

Alright, will you tell me how I can profit from all this?

Yes, you’re right — NFTs have become a part of the DeFi segment. In July 2020, one of the recognized NFT marketplaces Rarible started to reward its users with RARE governance tokens. This is how they raised trading volumes from thousands to millions in 2 months.

Trade NFT non-fungible tokens on Rarible and get your RARE tokens as a bonus.

Visit Opensea or Rarible NFT marketplace, see a non-fungible tokens list and their data, find the collectibles that look most promising to you, buy, and rest waiting while your purchase grows in price. This is not financial advice, though — do your own research before involving in this activity!

If you are an artist, NFT coins are a great tool for two reasons. First, you can reach a wider audience of those who monitor NFT marketplaces for novelties in music, visual art, etc. Second, if you tokenize your masterpiece and it becomes popular, you can sell it in a form of NFT for very good money.

As an example, an American DJ Justin Blau, known as 3LAU, sold his album in an auction for $11.6M. “NFTs will help artists recapture the emotional value they’ve accrued to their communities, — he said. — That value has been previously usurped & rehypothecated to produce ad revenue by centralized platforms.”

If you mint your NFT on Ravencoin, there are many awesome ways to promote your art. For example, RVNFT works as an NFT Art Agent: they expose your work on social media and add it to NFT marketplaces and auctions. Also, they can help you with creating your NFT: design and consultation services are available.

To see RVN NFTs, like for example this one by Minty, Portland Poetry, visit Braveland, Ravencoin virtual campus and participate in an NFT auction held there.

What is NFT, and what does NFT stand for? A non-fungible token is a tokenized digital item and the programmed proof that you own this item. Most often, it’s a digital collectible, an artwork, or an item in a digital universe. People spend millions of dollars on them because the subjective value of owning the original is very high. And you can be involved in NFTs, too: trade or invest in them on Opensea or Rarible, farm RARE tokens, or create your own NFT masterpiece that you will sell for thousands, and maybe millions of dollars!