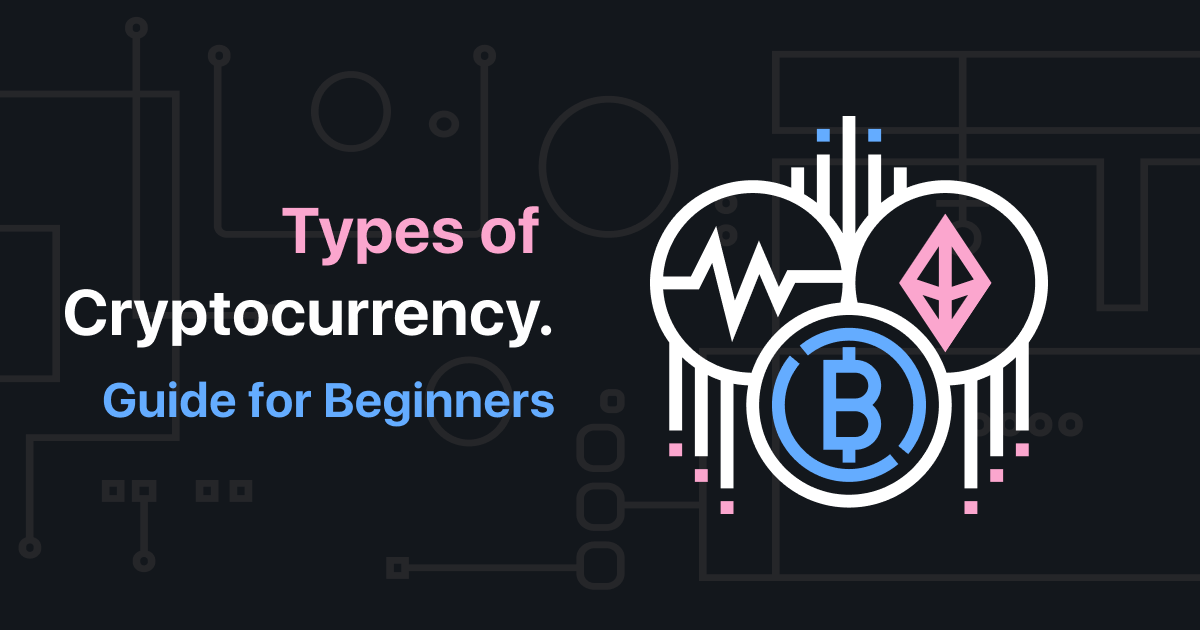 Cryptocurrencies have been steadily gaining momentum over the past decade and recently hit a new milestone when Bitcoin’s value surpassed $60,000, turning many crypto investors around the world into millionaires. Yet, despite all the publicity in the media, a layperson who is unfamiliar with blockchain technology still struggles to understand how cryptocurrencies work and why there is a whole host of them. The excessive focus on Bitcoin overshadows other currencies making them and their particular advantages less visible to the public.

This article will help you gain an understanding of different types of cryptocurrency and will assist you in becoming an expert at discerning a coin from a token.

Also, it is always good to know that crypto can be accepted as payment!

When talking about cryptocurrencies, one cannot overlook Bitcoin because, without it, the whole industry would not exist. Created in 2009 by illusive founder Satoshi Nakamoto whose identity still has not been uncovered, Bitcoin became the first currency to utilize blockchain. This technology introduced decentralized peer-to-peer transactions, which did not require any third parties or intermediaries such as banks. The Proof-of-Work consensus, a special mechanism that governs the operations of the network, ensures that the transactions which occur on the blockchain are verified. The system confirms transactions as valid with the help of miners who engage in solving a cryptographic algorithm. After coming up with the right answer, they receive a reward, and a new block of transactions gets added to the blockchain.

Altcoins constitute alternatives to Bitcoin. Currently, there are thousands of such currencies which, nevertheless, continue to grow in number. Ethereum, which emerged in 2015, is the most popular altcoin and is second to Bitcoin in terms of market capitalization and price. It has the same Proof-of-Work mechanism at its core and is completely open-source, which allows people from different parts of the globe to contribute to the project. The main advantage of Ethereum over Bitcoin lies in the fact that it lets users create their own decentralized applications on top of it. Additionally, Ethereum supports smart contracts, programs that self-execute after the conditions written into their code are met.

Litecoin was one of the first forks of Bitcoin. In other words, the currency’s developers used Bitcoin’s source code and modified it to deploy their own network. The primary differences of Litecoin from its predecessor are a shorter period of time for block generation, an increased maximum supply of coins, and a hashing algorithm. The Litecoin network generates new blocks every 2.5 minutes, which is four times faster than Bitcoin’s, making the speed of transactions much faster and transaction fees cheaper.

Monero is another open-source altcoin that was launched in 2014 as a fork of Bytecoin (not Bitcoin). Its main feature is the ultimate level of anonymity for users. Monero maintains a history of transactions which cannot be traced. Additionally, the Monero network utilizes the method of ring signatures, which hides the identity of the actual sender by mixing their account keys with the public ones and thus forming a group of potential senders. This leads to the situation when no external agent can determine which user sent the funds. Monero also makes use of one-time stealth addresses that obscure the real destination of a transaction.

Initially created as a joke, Dogecoin has managed to make a transition from a meme-coin to an actual payment method which many businesses accept. The foundation of the currency rests on the Proof-of-Work algorithm of Litecoin. In 2021, Elon Musk promoted the coin in his tweets which helped it reach a record market capitalization of more than ten million dollars. The coin boasts an amazing community whose members are extremely generous. For instance, the Dogecoin fans raised fifty thousand dollars-worth of their favorite currency to fund the construction of two wells in Kenya.

Stablecoins are a unique type of cryptocurrencies that are backed by other assets with an intention to reduce volatility. There are two kinds of assets that serve as collateral for stablecoins, fiat currencies, and other cryptos. Non-collateralized stablecoins also exist, and instead of having a reserve, they rely on built-in mechanisms which adjust their supply.

Tether is the most popular stablecoin in the crypto industry since it reflects the value of the U.S. dollar. Numerous crypto exchanges utilize it as a replacement for its fiat counterpart. In theory, one Tether must equal $1 in value, yet in reality, its price experiences fluctuations which are, nevertheless, minute.

The primary aspect of tokens that differentiates them from coins is that they are built on top of the existing blockchains. The Ethereum network is particularly popular among token-issuers. Developers of tokens set the size of the supply and other characteristics. As a matter of fact, the stablecoin Tether is actually a token.

Binance Coin is a token developed by the team behind one of the largest crypto exchange and trading platforms, Binance. This token has a host of functions which relate to the platform’s operations; for example, Binance Coin acts as a means for paying fees on the exchange. Yet, many e-commerce vendors also accept it as payment for their services and products.

Chainlink is a decentralized oracle network that has its own token LINK. An oracle serve as a connector between the blockchain and external sources of data. Users of the network pay the oracle node operators for their services in LINK. While the node operators, in their turn, deposit a certain sum in LINK with the network as a security measure. If a node operator demonstrates unacceptable behavior or violates the platform’s rules, their deposit becomes not eligible for withdrawal. The LINK token follows Ethereum’s ERC-20 standard, which makes every token fungible, in other words, absolutely the same.

Apart from fungible tokens, there are also non-fungible ones (NFTs), meaning that every such unit represents a unique piece. These tokens are commonly used for creating crypto art since they possess distinctive identification codes which allow holders to prove their ownership of a certain image or a video. These tokens also can be tied not just to virtual but to real-life assets such as a painting, a car, and even a bottle of wine. NBA Top Shot is an example of a platform that sells NFTs. Namely, it lists different tokens which feature memorable moments from NBA history.

All types of cryptocurrency are gradually becoming part of the life of modern societies, and it is important to be able to understand different kinds of them. Over a decade, the crypto industry has rapidly evolved and now offers multiple instruments and opportunities for various purposes ranging from transferring money to proving ownership. If the current trend continues, we will see even more crypto-based solutions in the future.