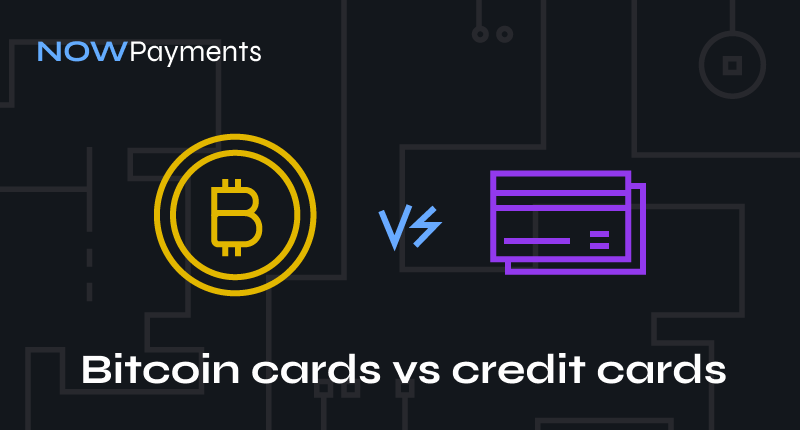 Long story short, cryptocurrency is a digital (or virtual) currency that does not have a physical representation. The unit of such a currency is a coin. Bitcoin is one of the first cryptocurrencies to be created and in this article, we would like to provide you with Bitcoin and credit card comparison.

Modern cryptocurrency wallets are designed in a way so that the user can forget about what is actually happening. When planning to run a transaction, the user enters the wallet address of the transfer recipient, the amount of the coins that they want to transfer, and the fee amount that they are willing to spend. Then the user confirms the transfer with a password and voila: the coins are gone!

This architecture can be considered both as a Bitcoin advantage and disadvantage. Visa or MasterCard transfers fees are determined based on the amount of each transaction and can be truly huge. In blockchain transfers, you can control the fee yourself and it will affect only the speed of processing.

All transfers from one Bitcoin wallet to another occur with some delay. The delay depends mainly on two parameters: the transaction fee and the network load.

The amount of the transaction fee is determined by the user themselves, and they can put in any amount they are willing to spend. However, a zero or too small of a fee can lead to an infinite delay, i.e. the transaction will not be accepted and the funds will return only in a few weeks.

After being signed, the transaction enters the queue (mempool). Since the block size, as we have already mentioned, has a fixed size of 1Mb and the transaction size in bytes can be different depending on the amount of participating addresses, those transactions for which the fee for each byte is maximum are selected for the next block.

Credit cards transactions, on the other hand, take a fixed amount of time to process but that time can amount to up to three days. Many advantages of Bitcoin include being able to control the speed of processing but you will have to pay for it.

Naturally, the integrity and security of the blockchain (the distributed access system that Bitcoin is based on) are secured by a special kind of cryptography. Bitcoin network is designed in a way that makes cryptocurrency transactions as safe as possible.

You own your Bitcoin funds, and no one can access them. With conventional fiat currencies, it is different: banks can freeze accounts and funds on them and the government can confiscate the money that is listed under your name. This is a very important aspect of the modern world, where money often acts as a way to pressure and punish people. At the same time, Bitcoin was created to guarantee full economic freedom.

Unlike conventional fiat currencies, Bitcoin is completely transparent. Anyone can check the blockchain, see every transaction ever made, and make sure everything is working properly. Unfair actions will be immediately noticed and eliminated. It is for this reason that fake Bitcoins and corruption within the system are simply impossible.

At the same time, banks can be robed or corrupted, PIN code of your credit card can be stolen and it would be almost impossible to return your money or even prove that it was stolen. This is also an advantage of Bitcoins vs cash or credit card as the system was made in a way that prevents the possibility of funds being stolen in the first place.

Bitcoin has remarkable quality, decentralization. This means that the currency does not have a single issuer, its existence in the economy is provided by all of the holders. Another point is that the decision on the reliability of the transaction is not made by any central organization, but by the entire community. Bitcoin guarantees owners economic immunity because it can not be faked or destroyed.

Some do not understand why Bitcoin is worth so much. Everyone who is familiar with the stock market knows that the price of Bitcoin (as well as stock price) depends on supply and demand. In short, the more people believe in cryptocurrency, the more expensive it is. Bitcoin pricing is, in fact, an example of an ideal capitalistic concept where no one can influence the price. Bitcoin is an example of the fairest market that has ever existed.

The banks, once again, are controlled by the government or at least small groups of people that chase their own interests. Yes, Bitcoin is criticized for its mining mechanism that allows hoarding a large amount of Bitcoins in the hands of the mining elite but this problem is solved in forks, for example.

Although the retailers will only be happy to replace credit cards terminals with Bitcoin payment options (due to the ease and speed of the transactions) the cryptocurrency holders are not ready to rejoice. The reason is obvious. Credit cards change the ratio between the joy of shopping and suffering, they provide an opportunity to experience joy now, and the discomfort is paying off to postpone until later. It is so much easier to use borrowed funds!

That being said, the process of mass adoption itself is slow and painful. Governments are not ready to lose control over financial operations and the advantages and disadvantages of Bitcoin do not matter much if it is still illegal in some countries. The biggest pro in using a credit card over BTC payments is that at least you can pay with a card anywhere.