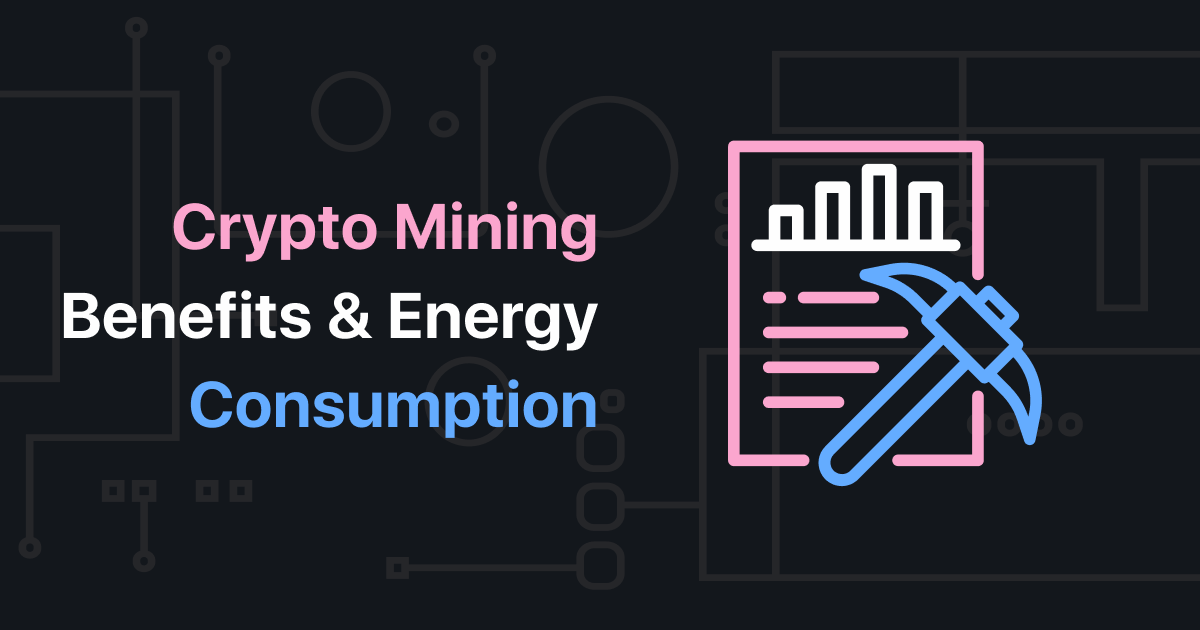 Cryptocurrencies often get a bad rep for being wasteful in terms of energy consumption. For instance, Bitcoin provoked a mining craze in the world and made people invest in equipment which required massive amounts of electricity to run and thus support the blockchain’s infrastructure. Yet, to a considerable extent, miners utilize renewable sources, which helps them avoid harming the environment.

Moreover, the crypto industry has a variety of alternatives to offer when it comes to minimal usage of electricity. There are tens of blockchains which pride themselves on being green and eco-friendly. This article will help you understand everything about crypto mining’s energy consumption and impact on the environment.

What is Crypto Mining?

Mining is a process which is inherent to all blockchains that utilize a Proof-of-Work protocol to ensure security and stability. Essentially, mining constitutes an activity that implies verifying transactions occurring on a network. People who engage in mining are called miners. To keep miners motivated, blockchains provide them with an incentive in the form of rewards. For instance, miners that manage to verify transactions on the Bitcoin blockchain receive a sum in the native currency of the network. Thus, mining is also essential for the issuance of new coins and introducing them to circulation. Mining forms the backbone of blockchains by keeping them secure and functioning.

As mentioned earlier, mining is part of any Proof-of-Work, mechanisms of which were described above. Yet, there are also other protocols that blockchains use to ensure their operations. A Proof-of-Stake is the second most popular type of protocol which, nevertheless, does not involve mining at all. In other words, blockchains that rely on a Proof-of-Stake do not require miners to verify blocks; instead, they utilize services of nodes that stake native currencies of these networks. In return, nodes also receive rewards, thus maintaining the issuance of new coins. There are more protocol types, yet the two aforementioned ones are most popular.

Two major blockchains in the crypto industry as of June 2021, Bitcoin and Ethereum, use Proof-of-Work protocols that require mining. One of the prerequisites of mining is proper equipment which would be powerful enough to deliver the performance necessary for solving complex mathematical problems. As a result, large enterprises that manage mining farms and mining pools, groups of cryptocurrency miners who combine their computational resources, demand large volumes of energy to power their devices.

Nevertheless, according to studies, in Europe and North America, more than 65% of electricity comes from renewable sources. Hydropower is the most common source of renewable energy. For instance, in Iceland, where almost all of the country’s energy is generated through renewables, mining data centers are particularly popular and annually consume more electricity than the entire population does.

Staking is often mistaken for crypto mining, despite the fact that this process does not intend the use of any powerful equipment. All one has to do to stake crypto is to have a sufficient amount of it and lock it in a smart contract. Thus, staking constitutes a green alternative to mining. Blockchains that use a Proof-of-Stake protocol are more energy efficient by a significant margin.

Blockchains and their Energy Usage

Bitcoin was the first blockchain in history, and it introduced the idea of a Proof-of-Work, and subsequently, mining. Even though the initial requirements of the network were not as demanding and users generally could mine using their CPUs, everything escalated quickly. Today, miners use special equipment called ASIC, whose sole purpose is to mine. As a result, Bitcoin blockchain is considered to be among the most energy-intensive ones in the industry. According to recent studies, the blockchain’s annual energy consumption equals 121.36 terawatt-hours which is more than enough to power Argentina for a whole year. Nevertheless, it is necessary to remember that Bitcoin’s energy needs are to a considerable extent covered by renewables.

Ethereum is another Proof-of-Work blockchain that requires substantial energy volumes to run smoothly. Nevertheless, the blockchain is less energy-intensive than Bitcoin, which can be explained by Ethereum’s lower popularity. According to Ethereum’s information, the network is on average more than twice as energy-efficient as Bitcoin and uses about 50 terawatt-hours annually. Moreover, at the end of 2020, Ethereum 2.0 was launched, a new blockchain that utilizes a Proof-of-Stake and which is set to revolutionize the industry. The network will not need any mining equipment and, therefore, will be absolutely green, requiring less than 0.010 Giga Watts a month. The complete switch to Ethereum 2.0 is expected to occur at some point in 2021 or 2022.

Cardano is a blockchain that uses a Proof-of-Stake which ultimately lets it maintain an incredible throughput of transactions per second and a low electricity usage. If in the case of Bitcoin, miners with the most powerful, hence, energy-intensive equipment get a chance to verify a block, Cardano relies on its native token ADA to choose validators. As a result, the blockchain does not create an incentive for users to waste large volumes of energy. According to Cardano, its network consumes on average only 6 gigawatts a year, which is equal to mere two power plants.

Elrond is a blockchain that also relies on a Proof-of-Stake protocol and additionally utilizes Sharding, a technological solution which helps optimize the network by dividing it into parts which are called shards. Thanks to its protocol and Sharding, Elrond possesses the capacity to process 15,000 transactions per second. Yet, the coolest thing about Elrond is the fact that one transaction on its network is 6,24 MILLION times more efficient than Bitcoin’s 550kWh transaction: Elrond Sustainability. Additionally, Elrond consumes slightly above 2 Gigawatts of electricity a year.

If you are considering accepting cryptocurrencies as a payment and want to choose only those that are green and energy-efficient, then visit NOW Payment’s website to learn more about 70+ cryptocurrencies that you can feature as a payment method. NOWPayments can assist you in deploying your crypto payment gateway using different tools.

You can make use of crypto invoices that are ideal for small businesses. If you own an online store and host it on Shopify, PrestaShop, WordPress, or other platforms, then you can begin accepting crypto just by installing a plugin. Bloggers and charities also can make use of crypto payments and set up a crypto donation widget or link on their website or social media. NOWPayments is a non-custodial service, so you retain complete control over your funds.

Energy consumption recently became a hot topic. Many people claim that blockchains consume too much energy and thus negatively impact the environment. While it is true that networks utilizing a Proof-of-Work protocol do require a lot of electricity to run, to a substantial extent, their energy comes from renewable sources.

Yet, apart from mining, some blockchains use staking as means to ensure the security of their networks and maintain the issuance of new coins. Staking does not imply exploiting energy-intensive equipment and subsequently requires much less electricity. NOWPayments can help you choose and accept cryptocurrencies that are green and eco-friendly.