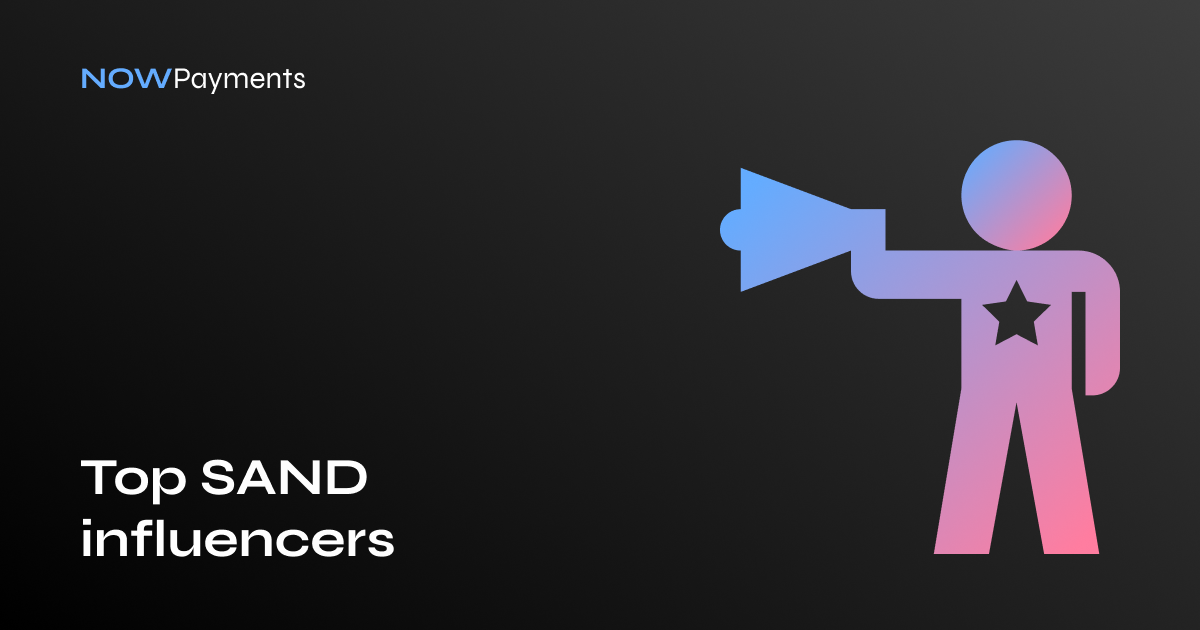 The Sandbox is a next-gen gaming project that enables people to participate in a massive metaverse deployed on the blockchain. SAND is the utility token of the Sandbox, which users utilize to play games and create unique assets. The Sandbox has an incredible community consisting of thousands of people. Some members of the community love to share their Sandbox experience and enjoy a large following on social media. Check out this list of popular Sandbox influencers whom you should definitely follow if you like the project.

Huey Stochastics is a Twitter account with more than 2k followers that regularly writes about NFTs and the Sandbox metaverse. Huey Stochastics shares invaluable data on the dynamics of prices on the Sandbox platform. It is not a secret that cryptocurrency prices tend to fluctuate, and people who try to make money off crypto trading need to keep an eye on all the activity on the market. Huey Stochastics’ Twitter is an excellent source of information for those who actively trade SAND. Additionally, Huey Stochastics posts statistics on the sales of Sandbox, which is also critical for making thought-out investment moves.

Sebastien Borget is a co-founder and COO of Sandbox. Mr. Borget has a large following of more than 29k people on Twitter. Sebastien often publishes and retweets news about Sandbox, so it is worth following him to stay up to date about all the developments of the platform. Sebastien also frequently attends IRL events where his followers can ask him questions or simply listen to his talks. Mr. Borget retweets the most exciting projects of the metaverse, so his Twitter account is great for individuals looking for new Sandbox experiences.

Josh Ong is a communications consultant who happens to be an official Sandbox Ambassador, the status many SAND owners would love to have. Josh’s Twitter account is extremely popular among the members of the Sandbox community since it has more than 69k followers. Josh is also an NFT guru who tweets about the hottest projects in the industry. Occasionally, Josh gives interviews sharing his perspective on the metaverse and Sandbox in particular. Basically, Josh’s Twitter is ideal for everyone interested in Sandbox and NFTs. By the way, Josh is also a sneakerhead, so be sure to check out the cool kicks that he posts on Twitter.

Chris Please is one of the biggest Sandbox heroes because he actually creates the world of the metaverse. Chris is an artist and a 3D NFT creator. Chris is a prolific creator since he has already produced dozens of Sandbox ASSETS that were bought by other members of the community. As of the beginning of November 2021, Chris had only one item eligible for purchase with a cost of approximately $5700. In his Twitter account, Chris often makes retweets of the works of other Sandbox artists. The Twitter account of Chris is the right choice for everyone who wishes to catch the latest and the best NFTs in the Sandbox multiverse.

Alex Florez is another voxel creator who is also the Lead Artist for Sandbox. If you decide to follow Alex on Twiter, be ready to get tons of quality Sandbox content in your Twitter feed. Alex always makes sure to post the most astonishing ASSETS from the Sandbox metaverse. He also occasionally holds competitions with a sizeable price pool, so when following Alex, you can get a chance to win some SAND rewards. Alex also has a YouTube channel which can be relevant for people who want to start their Sandbox artist journey. The tutorials offered by Alex are easy to understand and, based on them, anyone can start creating their own ASSETS and step up their Sandbox involvement.

Pandapops is a Sandbox artist, popular Twitter personality, and a Dive streamer who regularly livestreams here sessions in VoxEdit, special software designed for making Sandbox ASSETS. The content produced by Pandapops is super engaging since one gets to see the entire process of a voxel NFT creation. Pandapops also livestreams her gaming experience, and the games she plays are not restricted only to blockchain-based ones. The NFTs produced by Pandapops always go off the shelves quickly, so if you are a Sandbox NFT collector, you should seriously consider following her on Twitter. Moreover, Pandapops frequently retweets voxel art made by other creators, who also deserve their items to be in the collections of Sandbox players.

Mr Gold is a Sandbox voxel artist who has sold thousands of copies of his NFTs. His official account on the Sandbox market shows that Mr Gold created more than 190 unique ASSETS. On his Twitter, Mr Gold shares the projects he is currently working on, as well as the finished ones. Since he is one of the most prolific Sandbox artists, the line of players wishing to purchase Mr Gold’s ASSETS is quite long. So, if you want to have a chance to get your hands on the latest creation of Mr Gold, following his Twitter is a must.

Carina Chen is another creator of Sandbox ASSETS and also one of Sandbox’s Creator Fund artists. The Sandbox’s Creator Fund is an initiative supporting talent on the platform, people who demonstrate amazing skills and creativity contributing to the metaverse. Carina is an established voxel artist who even did works for Binance. Carina shares her creations with her Twitter audience and provides descriptions for all of the NFTs she makes. If you are a fan of Carina’s work, you should definitely follow her on Twitter to be the first to learn about her releases.

Arthur Madrid is the most important person in the Sandbox metaverse since he is the CEO of the project. Although his Twitter account does not have a large number of followers, it constitutes a great source of the latest news about the platform. Arthur mostly reposts Tweets from the official Sandbox Twitter. At the same time, he often accompanies them with his own comments, which can be valuable for SAND traders. Moreover, since Arthur occasionally participates in offline events, he Tweets about them, so his audience can come and see him in person.

Andy Richy is an ambassador of Sandbox and a game maker. Andy Richy’s Twitter is worth following if you are excited about the metaverse and the NFT world. Andy always makes reposts of promising NFT projects, as well as of news from Sandbox. Andy also has a Twitch channel where he plays Sandbox games and talks to his audience.

SAND is a token with a great community who are more than happy to spend their funds on in-game items and experiences. Using NOWPayments’ solutions, merchants can enable SAND owners to spend their crypto holdings on products and services outside Sandbox. NOWPayments’ tools include crypto invoices, Point-of-Sale terminal, e-commerce plugins as well as crypto donations widgets and links.

Sandbox is an awesome project, the popularity of which can be partially attributed to the efforts of its influencers. NOWPayments enables merchants to accept SAND as payment or donation using special tools.