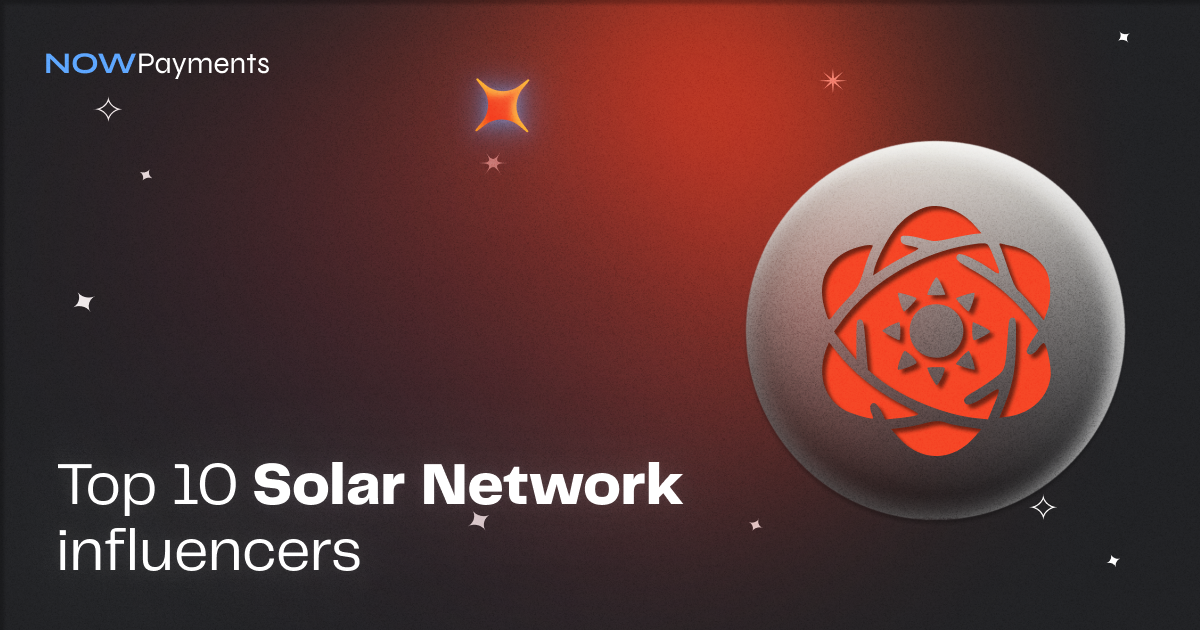 SXP is once again gaining traction in the crypto community. Previously, the coin had undergone a major transformation and gained a new home in the form of the Solar Network. Today, SXP is steadily getting new use cases, as the Solar Network continues to develop and release new products and services, including the District 53 Metaverse. Solar influencers play a key role in the rise of SXP and deserve more spotlight than they currently receive. This is why NOWPayments presents the top 10 list of the coolest influencers in the SXP community.

What is SXP crypto?

SPX is the native cryptocurrency of the Solar Network. Solar is an open-source blockchain which is driven by its community. Solar relies on a Delegated Proof of Stake consensus that leverages the power of 53 voted-in delegates that produce blocks and validate transactions. SXP provides utility on the blockchain. For instance, you can stake SXP to get rewards and use it to vote for delegates. Apart from being used on the Solar network, SXP is also utilized by several 3rd party services. There are businesses where users can pay with SXP for goods and services. Additionally, businesses can accept SXP as payment using NOWPayments.

Who are the best Solar Network influencers?

Nayiem is a foundation member of the Solar Network, which means that he is the person you definitely need on your following list if you want to discover more about SXP. Nayiem regularly updates his audience on the important developments in the Solar ecosystem and provides information about the key decisions made by the project’s team. For instance, here is his tweet where he talks about the upcoming changes to the whitepaper of Solar. So, make sure to follow Nayiem on Twitter, as he is one of the most knowledgeable people out there.

Elaine Carawebs is a Senior Brand Ambassador of the Solar Network. She is one of the most active influencers on the Solar roster. Elaine lets the audience know about every important thing happening with Solar, so by following her, you will stay posted. Recently, Elaine participated in an AMA session with changeNOW where she discussed multiple topics concerning Solar. We definitely recommend you check out this talk because you are guaranteed to get real insights into SXP.

It is also essential to mention the official account of the Solar Network on Twitter. It is your trusted source of info on SXP and Solar that covers every aspect of the network, including all the recent use cases. Solar’s Twitter page is a great example of how a well-kept Twitter account of a major blockchain project should look like. In addition to news and announcements, it features cool infographics and other visual content. Following Solar on Twitter is the best decision you can make as an SXP investor, so don’t hesitate to do it.

Axel Bitblaze is a popular crypto influencer, followed by thousands of people. Axel has a reputation as a successful investor and a skilled technical and fundamental analysis expert. He is also a connoisseur of crypto and Web3, who educates his audience on various important matters in the industry. Axel has made several tweets mentioning Solar and SXP, which show that he is following the project closely and is bullish about its future. You can read a collection of Axel’s tweets about SXP here. Apart from writing about Solar, Axel tweets about Bitcoin and other coins.

The Solar Network has a huge Turkish community. So, it is no surprise why SolarTürkiye, an account about Solar in Turkish, has gained such popularity. SolarTürkiye provides all Turkish-speaking people on Twitter with fresh news and updates on Solar, keeping them in the know about everything that is going on in the Solar universe. This is, by far, the best place for those who speak Turkish to receive all the fresh info on Solar in their native language without the need to translate anything.

SXP Directory should be your choice if you want to get really technical with the Solar Network and immerse yourself into the nitty-gritty of the project. Basically, SXP Directory is a source featuring a list of links that every Solar investor or enthusiast will ever need in their life. It provides an extensive selection of resources that go in-depth about every single aspect of Solar, from its consensus mechanics to SXP. Although SXP Directory’s website is the main place to get valuable information, its Twitter account is also worth following.

DoctorDeFi is another prominent crypto investor and NFT trader who is actually also running an SXP delegate node. DoctorDeFi provides generous returns to voters, giving them 80% of forging rewards. In addition to discussing different interesting topics about SXP, DoctorDeFi frequently tweets about NFT projects. So, if you share his passion for NFT and Solar, he will be an excellent person to follow. You may also follow DoctorDeFi to learn more about the delegate and voting mechanism on the Solar Network.

Arbarodelegate is another Solar delegate, whom you absolutely must follow on Twitter if you plan on running your own delegate node or engaging in voting on the Solar Network. Arbarodelegate knows a great deal about SXP and crypto in general and always shares his expertise with followers. Arbarodelegate also often conducts SXP giveaways, so have a unique opportunity to win some coins if you add him to your following list.

Jeffrey Tiefenthaler, also known as Jeffrey Tief, is the former Senior Brand Ambassador of Solar, who knows everything about Solar and the FinTech industry. Jeffrey is one of the key influencers of Solar and is a member of the project’s team. If you have been following Solar on social media, it is highly likely that you have seen Jeffrey. For instance, you can check out his insightful interview with Girl Gone Crypto. On Twitter, he always shares some food for thought in the form of interesting articles on crypto and economics in general.

Dokdo is a centralized multi-use-case platform with features to enhance the Solar Ecosystem. Dokdo promotes wider adoption of Solar by offering a line of products including District 53, the first Solar Network metaverse. Dokdo is an exciting project that generates real utility for SXP. Dokdo certainly deserves to be on your following list, because it is one of the most promising projects that are advancing Solar. So, follow Dokdo on Twitter.

How to accept SXP as payment

NOWPayments supports SXP influencers in their efforts to promote Solar and offers tools for businesses and individuals to accept SXP payments and donations.