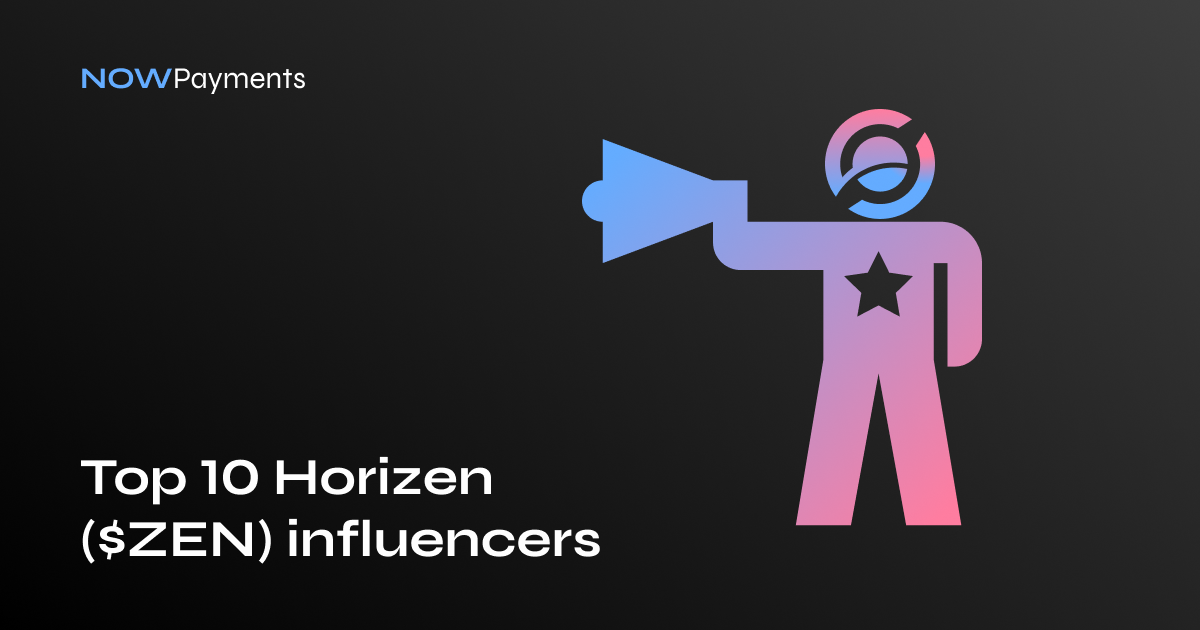 Each blockchain ultimately tries to attain full decentralization, excellent scalability, and exemplary protection simultaneously. Yet, such a mission is a tall order for many. Only the most advanced networks that rely on state-of-the-art technology are able to offer a blockchain that is efficient, private, and decentralized. Horizen is a blockchain which does exactly that. Horizen’s solutions, such as using proof-of-work (POW) with proof-of-stake (POS) together, as well as Zero-knowledge, enabled cross-chain protocol, make it one of the most modern and reliable blockchains. As a result, Horizen has a large community with a great number of influencers who promote and support the project and its ZEN coin. Here is a list of the most interesting Horizen influencers that are a must-follow for you.

Why is Horizen so popular?

Horizen’s popularity can be explained by several factors. First of all, as mentioned previously, Horizen is an innovative network that demonstrates impressive performance. For instance, in order to ensure security and decentralization, the main chain of the project employs PoW while side chains utilize PoS. Additionally, Horizen is extensively used by people to conduct transactions because they are cheap and fast. The average fee on the Horizen network is way less than $0.01. Moreover, users can send fully-private transactions, unlike on other networks. Horizen also acts as a platform for decentralized applications that benefit from its smart contract technology. Therefore, there are many developers who host their products on the Horizen network. The native cryptocurrency of Horizen, ZEN, constitutes a lucrative digital currency that can deliver great returns for stakers. Overall, Horizen is a project that corresponds to the requirements of a modern blockchain and has a lot of potential, which makes it extremely popular.

So who are the Top Horizen influencers?

Rob Viglione is the living legend of the Horizen community. Rob is the co-founder of Horizen and now the CEO of Horizen Labs, a Horizen blockchain-based technology company that provides tools for building decentralized solutions on the network. Unlike CEOs and co-founders of many other crypto projects, Rob Viglione is active on social media and frequently shares tweets with his audience on Twitter. Most frequently, Rob makes reposts of news related to Horizen and the latest projects and initiatives related to the blockchain. Additionally, Rob highlights quality tweets of other members of the Horizen community. Rob is open for communication, and if you have some interesting questions concerning Horizen, you can try to ask him in the comments. Essentially, following Rob on Twitter is a smart move if you are curious about the Horizen project.

MetaZEN is one of the main Horizen influencers. As stated in MetaZEN’s Twitter bio, he is a ZEN millionaire and a node operator. This means that MetaZEN is deeply involved with the Horizen platform and has good knowledge of the project. If you are a ZEN investor yourself, MetaZEN will be a great person to follow since he has an excellent insight into ZEN. MetaZEN shares his personal comments concerning different news about ZEN. For instance, here, you can read MetaZEN’s perspective on the node situation on the Horizen blockchain. Additionally, quite often, MetaZEN promotes other ZEN influencers, so his Twitter is a great source for searching new ZEN personalities to follow.

Ken Parksons is another ZEN community member whom you probably have seen online when reading ZEN-related tweets. Ken is based in South Korea, so his content will be particularly of interest for his compatriots since he frequently writes in Korean. At the same time, English-speaking ZEN investors will also like Ken’s tweets. For example, here, Ken compares the growth potential of ZEN with Bitcoin and offers his perspective on the possible future situation. Ken also likes to share different thoughts about ZEN. Recently, Ken made a great observation concerning the symbol of Tiger and Horizen and the opportunities for ZEN in 2022 due to this symbolism, check it out here.

Dean Steinbeck is a co-founder and president of Horizen Labs. He also works as a general counsel for Horizen. Although Dean is not your classic influencer, he is surely one of the most influential people in the Horizen community. Dean makes many reposts of news he considers worthy of his and the audience’s attention. Since Dean is a lawyer, his Twitter account will be especially relevant for all crypto lawyers. For instance, here, Dean highlighted a great thread about stolen NFTs. Additionally, Dean has an online publication called Crypto Law Insider, where anyone can learn more about how current laws apply to cryptocurrencies and blockchain.

Manon Boudoux, who is also known as CryptoManion, is a member of the French Horizen community. CryptoManion writes tweets primarily in French, and therefore her account is a must-follow for all French-speaking Horizen investors. By following CryptoManion, you can expect a lot of news on Horizen and related projects to emerge in your Twitter feed. Manon is an excellent speaker. Recently, Manon spoke to TK Mining, another prominent French crypto expert.

Ms. Cryptofu is one of the most active members of the Horizen community. It is worth following Ms. Cryptofu to get her unique perspectives on Horizen and the crypto world in general. She also often covers amazing use cases for Horizen. For instance, she was one of the first people to point out that a café in Britain began accepting ZEN as payment. Mr. Cryptofu often posts quality articles on Horizen, including those talking in-depth about the basics of Horizen, which are worth reading for all ZEN novices. Ms. Cryptofu openly shares her investment philosophy with the audience. Basically, Ms. Cryptofu is one of the best Horizen influencers out there.

ZENturio is another amazing Horizen community personality that ZEN investors should follow on Twitter. ZENturio is great at promoting ZEN and getting you excited about the Horizen project and its development. After reading ZENturio’s tweets, you are guaranteed to get an instant urge to buy more ZEN. ZENturio truly believes in ZEN and sometimes shares his thoughts on the coin. For example, here, ZENturio noted that ZEN was soon going to achieve a new market cap milestone. ZENturio’s account is also a good source of ZEN-related memes, for example, check out this tweet that accurately describes occasional feelings of every ZEN investor who has been holding the coin for long enough. So, follow ZENturio if you need to have some ZEN inspiration and humor in your life.

Unidentified Saturn man is, just like Ken Parksons, a member of the Horizen community of South Korea. Saturn man is also a super node holder and secure node holder on the Horizen blockchain, so you can be certain that he knows his way around the Horizen project. As a result, Saturn man is one of the people that every ZEN investor needs to listen to to have a better understanding of the market situation. Saturn man does not share his personal opinion very often, but when he does, he has really compelling perspectives. For example, here, you can read about Saturn man’s opinion about the growth potential of ZEN in 2022. Unfortunately, if you do not speak Korean, at times, you will have to rely on Google Translate. Yet, Saturn man also has many ZEN-related tweets in English.

Rekodi is a strong supporter of the Horizen project and ZEN, who always cheers for the coin. Rekodi publicly states that he invests in ZEN and continuously promotes the asset among other Twitter users. As a result, Rekodi makes tweets containing his opinions on Horizen and other developments surrounding it. For example, here, you can read Rekodi’s perspective on ZEN and privacy. In addition to ZEN, Rekodi posts tweets and makes reposts of news related to other cryptocurrencies. So, by following Rekodi, you can get to know more exciting crypto projects. Moreover, Rekodi is an NFT connoisseur and maker, and you can buy items from his NFT collection.

Nick Hellmann is a popular crypto influencer who has been a long-term Bitcoin investor and invested in ZEN. According to Nick, he owned ZEN since it was only $6, and he continues to hold the asset calling it a “Sleeping Giant.” Nick even included ZEN as one of the most promising assets for 2022, so his commitment to a long-term ZEN investment strategy is obvious. In addition to tweets, Nick regularly posts videos where he expresses his takes on the current state of affairs on the crypto market. You can even subscribe to his Patreon to get more videos and other content on crypto investment.

Horizen is totally one of the most rapidly developing platforms in the industry that attracts the attention of a growing number of people. Horizen has built an amazing community of investors and influencers. If you own ZEN and wish to contribute to its wider adoption, you can start accepting it as payment or donation. NOWPayments provides tools for deploying a ZEN payment or donation gateway.