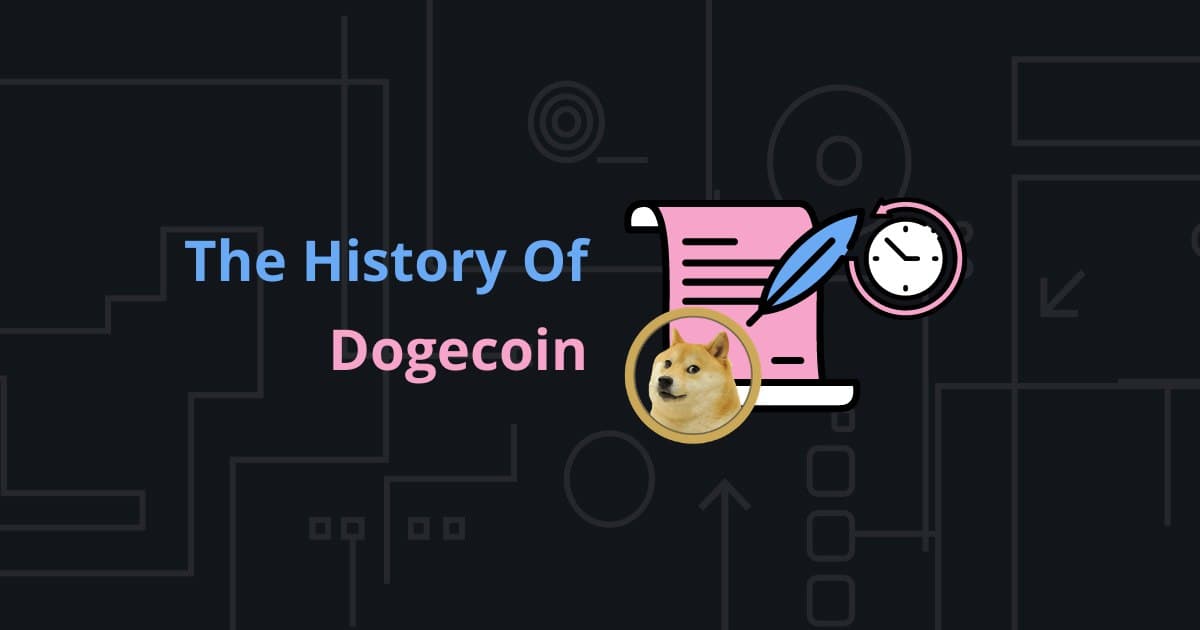 Dogecoin utilizes the crypto code Doge and the symbol Ð and was created by two tech geniuses going by the names of Billy Markus and Jackson Palmer. The coin was originally created as a fun coin to allow users to make exciting transactions that were free from the centralised banking system that we’ve known for 100s of years. The mascot for Dogecoin is the infamous Shiba Inu, which has become somewhat of a crypto meme over the past decade with Dogecoin. So let’s give you a full history lesson on the inception of Dogecoin and everything that’s happened to the current date and what is Dogecoin.

The Official Launch of Dogecoin

The creators of Dogecoin are Bill Markus and Jackson Palmer. The two teamed up to create Dogecoin and released it to the world on December 6th 2013. At the time Bill Markus was working at IBM and Jackson Palmer was working at Adobe as a software engineer. Originally Palmer was the one who purchased the domain for Dogecoin and created a splash screen for users to check out. It was then where Markus reached out to Palmer and the development of Dogecoin started. They developed the system on the protocols of Litecoin and Lucky coin using the scrypt technology which is a proof-of-work concept. The scrypt technology utilises FPGA and ASIC devices for mining rather than allowing the use of SHA-256 mining equipment you’d see with bitcoin.

So what happened after the official launch of Dogecoin?

Weeks after the Launch of Dogecoin

Dogecoins history is vast with fun and exciting information. A few weeks later on December 19th, 2013 Dogecoin saw some massive gains over a 3-day period. The price increased from a measly 0.00026 to a monstrous $0.00095, a 300% increase in price. These types of gains were insanely high at the time and many users were scurrying to get in on the action in an attempt to make some big bucks. During this period the trading volume of Dogecoin exceeded the billion mark in coins. However, the pump was short, as China decided they wanted to ban Bitcoin in their country. This led to mass panic and 3 days later the token saw its first price dump, decreasing in price by 80%.

A week later there was a mass hacking on the Dogecoin blockchain. This occurred on December 25th, 2013, a Christmas day too at that. Several coins were stolen from the crypto wallet they produced called the Doge wallet. Many users suffered from this, however, in despair, a campaign was raised under the name the SaveDogemas. This campaign was a great success where many individuals joined in to donate funds for those who lost their tokens in the hacking. They were able to raise almost all the funds, and things were starting to look up for the users of Dogecoin.

A Few Years into DogeCoin

With the mishaps in 2013 Dogecoin started to see some success in 2014, where it briefly surpassed the trading volume of bitcoin. There was also a change made to the block rewards during 2014. Initially, the block rewards were all random, and you’d get what you were given, but the team realised this was a bit of an issue and changed it to a static block reward. Miners were happy with this and have carried on mining Dogecoin for years.

2015 was a sad year for Dogecoin as the main man himself Jackson Palmer announced that he’d be taking leave from the project for a long period of time. From here onward, it was off to the moon for Dogecoin. It entered the 2017 – 2018 bull market spiking its first all-time high of $0.017 getting close to a 2 billion Mcap. Then a few years later the TikTok hype train arrived where users were trying to skyrocket the price of Dogecoin to $1. A year after the owner of Tesla, Elon Musk decided to make a few tweets supporting Dogecoin. This led to the price of Dogecoin increasing by 800% in just 24 hours, where it reached its new all-time high.

For the community to get Dogecoin to $1, the market cap would need to be approximately 20x its current number. Putting it in the region of $140B. To put that into context, there are only 2 cryptocurrencies that are above that Market Cap. Those are Bitcoin and Ethereum.

You can buy Dogecoin at reputable exchanges such as Binance, Kraken and OKEx.

Many companies also allow users to pay with Dogecoin for various items on their websites. They accept Dogecoin payments simply because it’s such a popular cryptocurrency and many people love it. So if you want to make a dogecoin payment to some local retailers, check out their websites because they might just accept it. There are also many Dogecoin payment gateways available to use.

The Dogecoin history chart is promising as it has shown that Dogecoin can do the unexpected to reach all-time high values. However, even though in 2021, the price of Dogecoin might increase, the $1 figure everyone is dreaming of is a long way ahead.

You can check Dogecoin price predictions on DigitalCoinPrice.

The coin price may exceed $0.08 mark, according to the FXEmpire. The price is unlikely to moon astronomically as there is an infinite supply of coins that can be mined leading to low volatility in comparison to other coins in the current bull market.

Dogecoin in 10 years could potentially reach that beloved $1 price point as long as the FOMO is still alive!

Dogecoin has come a long way in the past decade of its inception. Even though the concept behind it is Fun, coin users to this day use Dogecoin to make payments and trade to make some good profit.

We hope you’ve learned a lot from the Dogecoin review on the history of the coin.