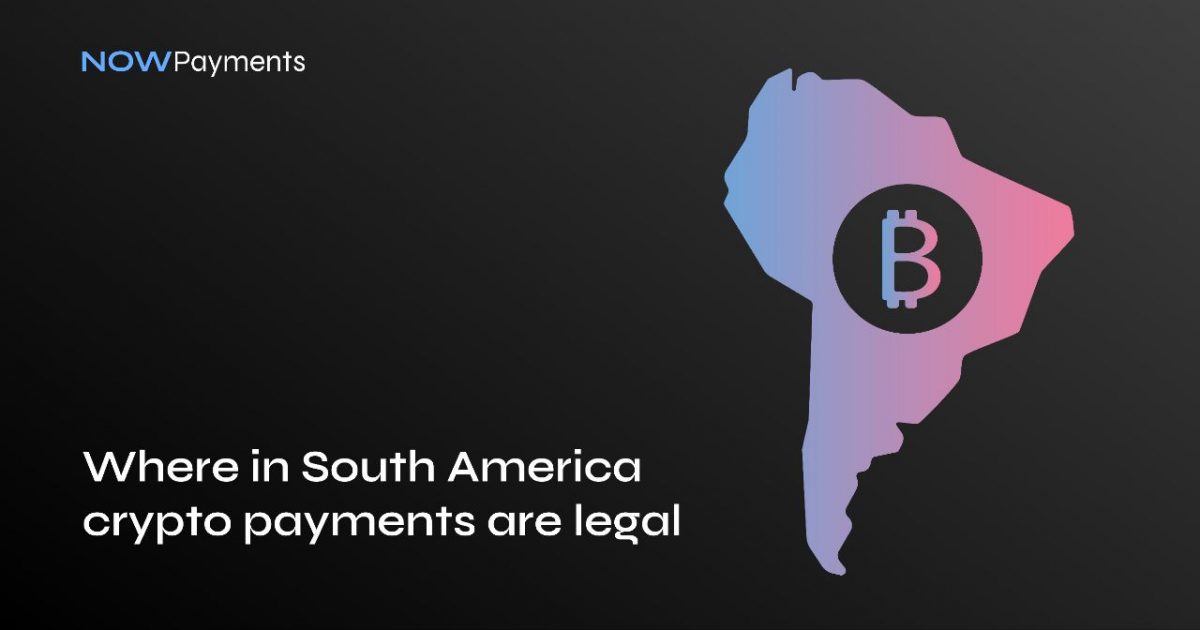 Cryptocurrency has become the most trending payment method over the past few years. For some merchants, digital assets are just a way to attract more customers; for others, it is almost the only way to survive in their economic realities. Therefore, we invite you to find out in which South American countries cryptocurrency can be legally used to pay for goods and services.

Why is South America crypto-friendly?

South America is experiencing severe economic problems due to the inefficiency of the financial system of its constituent countries. As a result, the inflation rate in the largest countries of South America reaches threatening levels. Cryptocurrencies help ordinary people and businesses protect their savings from hyperinflation, and migrants can access faster and cheaper money transfers. Thus, two key reasons can be identified as why South America is crypto-friendly:

Hyperinflation in some South American countries is reaching record levels. For example, according to the IMF, the inflation rate in Venezuela reached a jaw-dropping 1,370,000% in 2018. And the value of the bolivar has fallen by 99%. Today the situation is much better — only 284% is the inflation rate. In addition to Venezuela, although to a lesser extent, Argentina, Brazil, and Paraguay are also experiencing inflation. Because of inflation, residents of some South American countries regard cryptocurrency so well. After all, against the background of such critical inflation rates, the volatility of cryptocurrencies is a trifle. Cryptocurrency allows residents not only to save their funds but also to increase their savings.

The low standard of living pushes residents to migrate from South America to countries with more developed and stable economies. For example, more than 6 million Venezuelans have left the country over the past few years. Most people go to work in the USA, leaving their families and friends. Migrant workers send remittances to them. The volume of remittances from the United States to Mexico alone amounted to $28 billion last year. However, traditional financial structures charge enormous fees for cross-border payments and have speed limits. For this reason, migrants choose cryptocurrencies. Cryptocurrency transfers are used not only by migrant workers but also by local businesses.

What countries are legal for crypto payments?

El Salvador became the first country to recognize Bitcoin as a legal tender. The bill was approved on June 9, 2021, and from September 7, 2021, every seller in El Salvador is required to accept Bitcoin as a means of payment. To implement this project, a significant amount of funds was allocated, and a large number of private companies were attracted. In addition, its own crypto wallet called Chivo was organized.

Mexico is one of the countries where most representatives of the law have a positive attitude towards cryptocurrency. In addition, one of the largest crypto exchanges, Bitso, is based in Mexico. It is also worth noting that the head of the leading bank Banco Azteca said that they are considering accepting Bitcoin in the near future. All of this should positively affect the Mexican economy and help many residents hedge inflation risks. Moreover, Mexican entrepreneurs are very positive about blockchain and cryptocurrencies. So, more than 71% of residents want to use cryptocurrencies. And more than 40% of Mexican companies are ready to adopt crypto payments.

Venezuela is perhaps the most crypto-needy country. Due to the critical level of inflation, residents of Venezuela are among the most active crypto users. In many ways, such a sad economic situation has developed because of US sanctions. The Venezuelan government, represented by Nicolas Maduro, even released its own digital asset Petro, designed to circumvent sanctions and fight the devaluation of the national currency. However, Petro is not particularly popular with the local population, unlike other cryptocurrencies. To date, more than 10.3% of Venezuelans are owners of cryptocurrencies.

Argentina is another South American country whose residents widely use cryptocurrency. A real crypto boom happened in Argentina in 2020 when most of the population turned to cryptocurrencies in order to save their funds. Thus, the economic situation in Argentina was rapidly deteriorating, the inflation rate was rising, and the national currency was depreciating. Argentines could not even invest in the US dollar, as a ban was imposed on the purchase of dollar amounts over $200. All this led to a massive transition to Bitcoin and altcoins.

Local legislator Carlitos Rejala promised to introduce a bill that will make Paraguay one of the world’s most advanced countries in the field of cryptocurrency and blockchain regulation. The bill was supposed to be presented in the country’s parliament on July 14, 2021. The parliamentarian promises that thanks to the bill, Paraguay will become a cryptocurrency hub for investors worldwide. However, the pace of development and adoption of the law is extremely long. But we can say for sure that the government is working in this direction.

According to local congressman Gabriel Silva, Panama may become the next after El Salvador. He is sure that it is necessary to pay attention to Bitcoin so that the country can become a hub for business and technology development. Previously, Silva’s party has already successfully cooperated with the ruling party on several bills, so there are chances of reaching an agreement in this case. To date, the government is actively seeking to recognize Bitcoin as an alternative payment option “for any civil or commercial operation”.

Some politicians in Brazil are already actively expressing their support for El Salvador’s initiative. In Brazil, this was done by deputies Fabio Ostermann and Gilson Marquez. Brazilians are the most active supporters of the recognition of cryptocurrencies in the region: 56% supported the decision of El Salvador, and 48% said they want Brazil to also adopt a digital currency, according to a study by Valor Investe. Furthermore, about 5% of the population actively uses cryptocurrency in everyday life or as an investment tool.

For some countries of the world, cryptocurrency payments are salvation. Cryptocurrency allows you to make fast, cheap, peer-to-peer payments regardless of location. The introduction of a crypto payment gateway can help attract more customers, stay ahead of competitors, and ensure the long-term success of your business. With NOWPayments, merchants can start accepting cryptocurrency for payment easily and cost-effectively. We provide various tools: invoices, crypto API, various plugins, and even virtual PoS terminals. Integrating any of the tools does not require much time and deep technical knowledge.