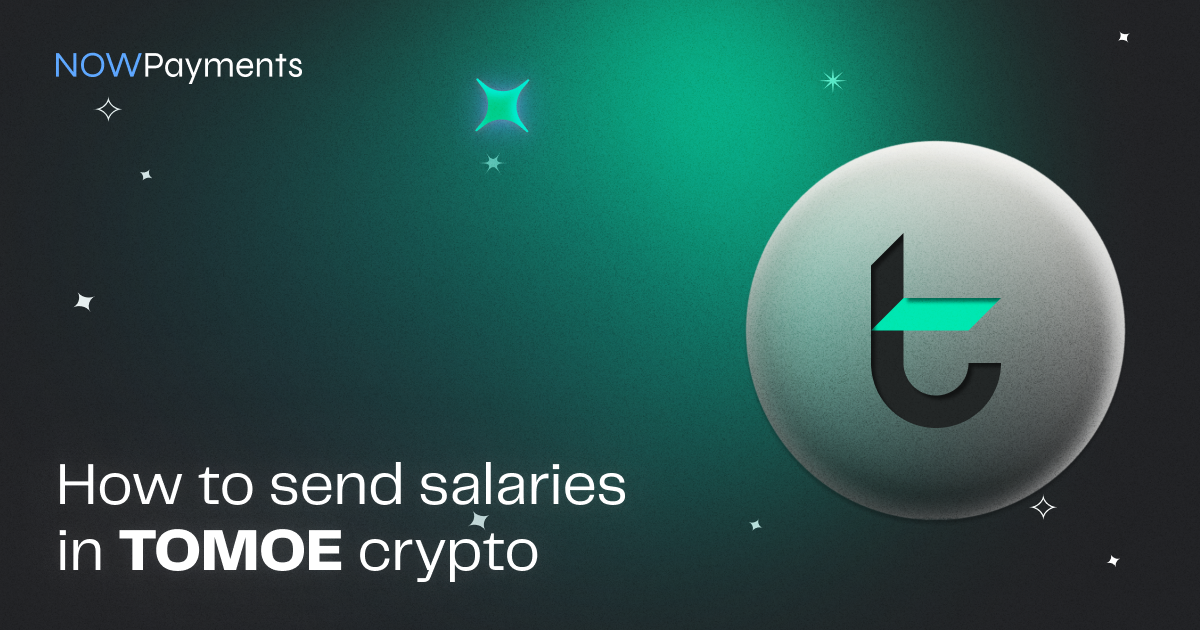 TomoChain is a highly secure and scalable blockchain network that has been in operation since 2018. One of the most impressive features of Tomochain is that it takes a community-driven approach to accelerate the mass adoption of cryptocurrency and Web3 products. In other words, the network is built on the idea that the collective wisdom of the community can help make it better for everyone. This tool allows for a more efficient and cost-effective way of participating in the crypto economy. TomoChain also offers a number of benefits, such as fast transaction speeds, low fees, and the ability to deploy smart contracts in a secure environment. NOWPayments enables businesses to send salaries, bonuses, and refunds in TOMOE seamlessly and without breaking the bank.

TomoChain is a blockchain and product ecosystem intended for empowering developers, organizations, and institutions to build world-class blockchain projects with enhanced EVM-compatibility. Thanks to leveraging Proof-of-Stake Voting (PoSV) consensus it manages to act as a fast, private, secure, and user-friendly platform. TOMO is the native token of TomoChain. It also has an Ethereum equivalent called TOMOE. TOMOE is an ERC20 token implemented on the Ethereum blockchain, with a 1:1 parity with its native token, TOMO, held on the TomoChain blockchain. The exchange rate for TOMOE and TOMO remains constant.

Why Should I Send Salaries in TOMOE?

Salaries in the TOMOE token are a wonderful solution for businesses that are sick of the hassle of the traditional payroll system. We all know how tedious it can be to do the paperwork and jump through dozens of hoops necessary to stay compliant with KYC regulations.

It steals precious time and resources that could be better spent elsewhere. TomoChain crypto salaries are a breath of fresh air for businesses. The blockchain-based system makes it easy to handle salaries quickly and securely. Companies can relax knowing that their employees can receive their salaries in a timely manner, without having to worry about the issues inherent to the mainstream solutions. It is a win-win for everyone.

Blockchain’s built-in encryption ensures complete confidentiality, so you can trust that your payment information is safe and secure. With TOMOE, you can rest assured that no banks or other financial institutions will be able to control your money. Ethereum’s security features protect TOMOE users’ funds from hackers, scammers, and other malicious actors.

TOMOE transactions can be executed across the world without any limitations. Thanks to its peer-to-peer nature, TOMOE is available to anyone, no matter where they are located.

That means you can send money to someone living thousands of kilometers away in a matter of seconds – a feat that could previously only be accomplished through expensive, time-consuming processes. Thus, the Tomochain coin enables businesses to pay their employees residing abroad directly and without the involvement of any banks or other similar services. Simply top up your wallet and make the transaction.

TOMOE has no restrictions, so you have the power to transfer TOMOE tokens as much as you’d like. There are millions of possibilities of how you can use this technology, as the sky is the limit.

You can utilize it any number of times and send salaries to an infinite variety of recipients, which allows you to create the most effective and efficient payment system for yourself and your employees. Your workers can withdraw any amount of TOMOE at any time by swapping it for another currency.

So How Can I Pay People with TOMOE?

NOWPayments provides businesses with a reliable and secure Tomochain payment gateway, allowing them to send and receive payments in TOMOE.

To facilitate the payment of salaries in TOMOE, the Custody feature must be enabled in the NOWPayments account. To do so, please follow these steps.

TOMOE provides a faster approach to payroll processing. Use NOWPayments to pay your employees in TOMOE.