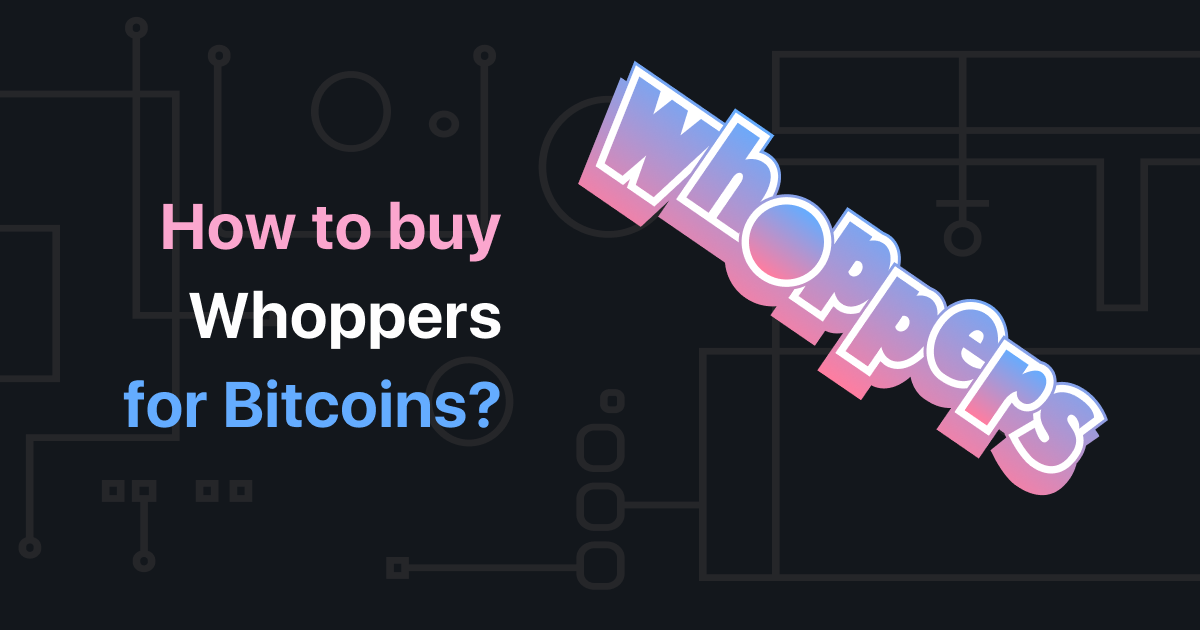 Bitcoin remains the most sought-after digital asset in the world. It is also a currency which is widely used by people all around the world. When companies consider accepting cryptocurrencies as payment, Bitcoin always becomes their priority since there is hardly any other virtual asset that has the same level of adoption.

The Beginning of Burger King

The modern Burger King restaurant chain grew out of a small restaurant opened by Keith Kramer in 1953. Kramer and his wife’s relative took their inspiration from the mighty McDonald’s, which at that time was already a huge sensation. Kramer named his first restaurant Insta-Burger King. Several years later, Kramer had several locations. Then, James McLamore and David Edgerton bought a franchise of Insta-Burger King and opened their restaurant in Miami. The enterprise was a success, and the friends even created a special gas grill that improved the restaurant’s performance. Eventually, when the Insta-Burger King chain encountered financial turmoil, McLamore and Edgerton purchased the company from Kramer. They renamed the company and its iconic burger, which signaled the official start of Burger King and Whopper.

In 1978 the company hired former McDonald’s executive Donald N. Smith who helped transform Burger King into an international brand. The sales were growing every year, and the company managed to be competitive with McDonald’s. The 1970s-1980s was also the period of so-called Burger Wars, the time when Burger King, McDonald’s, and other fast-food chains were investing heavily in advertising which belittled their competitors. Eventually, Burger King lost the race and suffered considerable losses during the 1990s. Nevertheless, the brand got back its status as the number-two fast-food chain by the end of the 2000s. Today, Burger King is still one of the most successful franchises worldwide, which has locations almost in every part of the planet.

Burger King’s HQ never made any official statements concerning the adoption of cryptocurrencies as a payment method. Yet, many of the company’s regional branches have already attempted to implement cryptocurrencies into their business models.

Perhaps, out of all Burger King branches, the Russian one went farthest in terms of adopting cryptocurrency. In 2017, the Russian subdivision of Burger King issued its own tokens called WhoperCoin using the Waves blockchain. Burger King gave away these coins for every purchase of whoppers. Essentially, customers could save a certain amount of WhopperCoin and spend it on a burger. Nevertheless, the experiment was not successful, and the coin met its demise within two years.

Bitcoin at a Dutch Burger King

Arnhem is a city in the Netherlands which in 2016 launched a program to become the most Bitcoin-friendly place in the world. In an effort to promote the adoption of decentralized payments, various enterprises located in the city started to accept Bitcoin. Burger King was one of them. Citizens of Arnhem and people visiting the place could easily grab a whopper at the local Burger King and pay in Bitcoin for it. Unfortunately, the campaign was not successful, and gradually, Arnhem’s Burger King stopped featuring Bitcoin as a payment option.

Where to Buy Whoppers with Bitcoin

Still, crypto enthusiasts have plenty of Burger King locations to spend their Bitcoin at. For instance, German Burger Kings accept Bitcoin payments. Yet, there is one condition clients have to observe. Bitcoin payments are available only for online orders. Unfortunately, clients cannot walk into a Burger King and get their favorite meal with Bitcoin in Germany. To do it, they will have to use Lieferservice, a company that delivers Burger King orders. Nevertheless, in addition to Bitcoin, clients also can pay in Bitcoin Cash, so they have a choice.

The most recent newcomer to the club of Bitcoin-friendly Burger Kings is the Venezuelan branch of the company. It is unclear how many locations in total accept Bitcoin in Venezuela, but the initial plan was to cover dozens of stores. Moreover, Bitcoin is not the only currency in which Burger King clients in Venezuela can pay. The stores also welcome customers with Dash, Binance Coin, Litecoin, and Tether. It seems that today Venezuela is the only place on the planet where you can walk into a Burger King and buy a whopper with Bitcoin.

Not Whoppers, but Whopper-themed dog treats can be bought with Bitcoin in Burger Kings around Brazil

Crypto enthusiasts living outside of Germany and Venezuela can still buy whoppers using their Bitcoin. The only difference is that they will need to get creative. One of the most common ways to spend Bitcoin in places which do not accept it directly is to buy gift cards. Burger King issues thousands of such cards, and there is no problem getting them with Bitcoin. There are a dozen of platforms which sell Burger King gift crypto gift cards, including Bitcoin. For instance, at eGifter, you can get cards ranging in value from $5 to $500.

Another popular solution can be paying for virtual debit cards with Bitcoin. Services such as ezzocard offer their clients the ability to order prepaid debit cards and pay for them in crypto. Clients can buy such a card and then utilize it to pay for whoppers at their local Burger King.

If you own a restaurant or even manage your local Burger King and want to accept cryptocurrencies as payment, then NOWPayments can help you do it efficiently. NOWPayments is a non-custodial service which provides several solutions for the fast deployment of crypto payments gateways. For example, you can utilize crypto invoices which feature payment details important for your clients. If you have an eCommerce business and host your website on platforms such as Shopify, PrestaShop, WordPress, Shopware, or several other ones, using plugins for automatic processing of payments should be your choice. NOWPayments also features crypto donations widgets and buttons for charities, non-profit organizations, and bloggers. Businesses that intend to make crypto transactions a substantial part of their infrastructure can make use of the mass payments feature available at NOWPayments.

Both Burger King and Bitcoin are massive brands that truly have a global outreach. It seems that complete integration of the two is only a matter of time. Nevertheless, there are already instances of Burger King locations accepting Bitcoin around the world. Today fans of the fast-food chain who wish to buy whoppers with Bitcoin can do it in Germany and Venezuela. For the rest of the community, there are alternative ways such as gift cards and virtual debit cards. NOWPayments advances the crypto mass adoption, and you can participate in the movement by accepting cryptocurrencies as payments or donations.