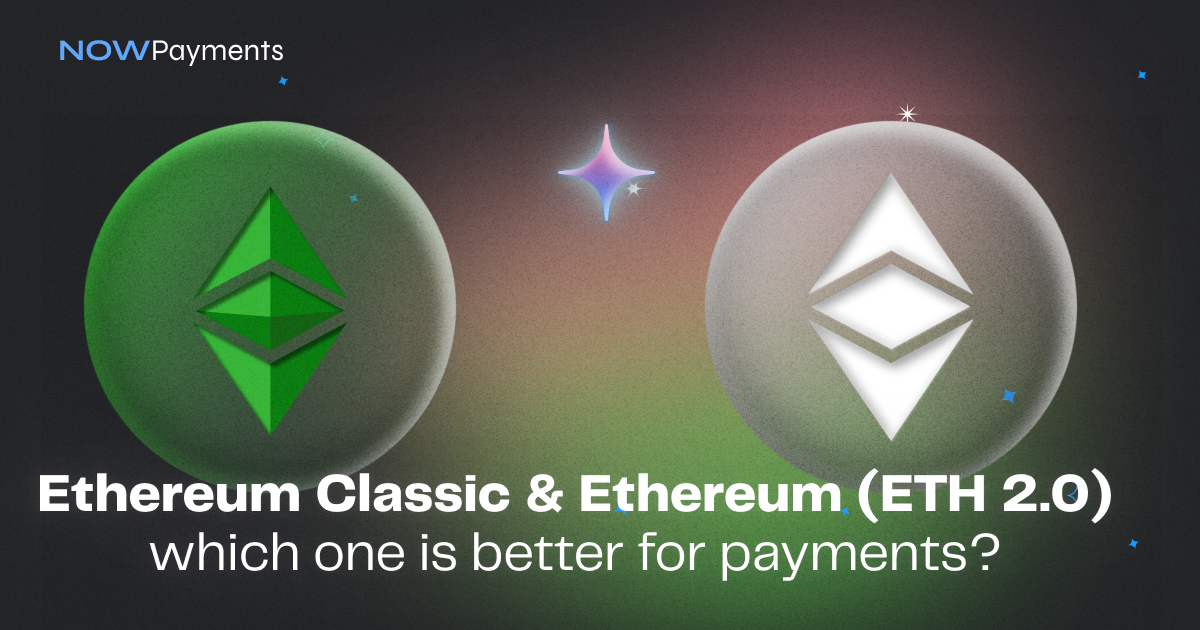 Ethereum was launched in 2015 and became the second most popular cryptocurrency after Bitcoin due to the increased functionality and focus on building decentralized applications. The Ethereum Classic resulted from an update to the original Ethereum blockchain following a major hacking attack in 2016. Both blockchains are in use today, although Ethereum’s price and market cap have greatly outperformed Ethereum Classic.

In this article, we will discuss each of these networks and look at the key differences between them. Choosing the best one for payments will depend on what features and qualities are the most important for each user.

According to the official Ethereum description, it is “a global, decentralized platform for money and new kinds of applications,” with a variety of games and applications running on its network. Since it became so widely used, other cryptocurrencies such as DAI, Tether (USDT), and Basic Attention Token (BAT) are now built and hosted on its blockchain.

The Ethereum blockchain is a peer-to-peer, decentralized, and distributed public ledger that verifies and records transactions. This is done by the network securely verifying the application code, known as smart contracts. The use of cryptography and verifiable contracts allows participants of the blockchain to transact without having to rely on a central authority. Participants have access to an exact copy of the ledger and can view all previous transactions because every recorded transaction is immutable, verifiable, and securely distributed across the network.

The transactions are initiated and received using Ethereum accounts. The sender signs the transaction and pays the cost of processing with Ether (ETH), which is the native cryptocurrency of the Ethereum blockchain.

The most unique and popular property of Ethereum compared to its contemporary networks is that anyone can build applications, also called dApps (decentralized apps). These dApps run on the blockchain similarly to the way software runs on operating systems. They can be utilized for a number of industries, such as the exchange and storage of private information, decentralized finance, web browsing, gaming, and social media.

The Ethereum community is currently in anticipation of the update to ETH 2.0. This update will merge the current Ethereum mainnet with the Beacon Chain. Although both chains are active at the same time, only the Ethereum mainnet, which employs a proof of work algorithm, is currently processing transactions. Once the merge is complete, the Ethereum mainnet will shift away from proof of work and instead adopt the Beacon Chain’s proof-of-stake mechanism. Be sure, NOWPayments supports the 2.0 update of Ethereum. The merge will not affect the payments in any way.

What is Ethereum Classic?

Ethereum Classic, like the original Ethereum, is an open-source, decentralized, blockchain-based distributed cryptocurrency network that utilizes smart contracts. It also allows dApps to be built and hosted on its platform. Ethereum Classic (ETC) is the native currency of the network. The Ethereum Classic network also permits dApps to create their own tokens on the platform.

The Ethereum Classic network came into existence on July 20, 2016 when a vulnerability in the original Ethereum code resulted in a massive theft of funds. To fix it, the Ethereum blockchain was hard forked. Some users, however, were of the opinion that the theft should remain on the blockchain to keep the original ledger intact. They stayed on the existing platform and changed the name to Ethereum Classic.

Due to the use of the same base code, many of the features found on Ethereum can also be found on Ethereum Classic. The main difference between it and Ethereum is ideological since it chose to remain immutable and provide a perpetual Proof of Work system for users to participate in.

The differences between Ethereum and Ethereum Classic

Which Ethereum is better as a payment tool?

The first factor to consider is that there’s a huge difference between the price of ETH and ETC. Ethereum is more popular and is considered the standard. As of September 7, 2022, ETH is priced at $1,565 while ETC is priced at $35. Because Ethereum is one of the most popular cryptocurrencies, second only to Bitcoin (BTC), it’s reasonable to choose it as the more popular option that is widely available.

However, ETC might be a better choice for blockchain idealists who believe in the ledger and the mandate not to tamper with it.

To start accepting ETH and ETC as a payment, you can register a free account with NOWPayments. It currently accepts over a hundred different cryptocurrencies that can then be converted and sent to the wallet of your choice. The main advantages of this service are access to dashboards, a variety of coins available, and 24/7 user support. It is also non-custodial which means they don’t keep user funds.

How to start accepting payments with NOWPayments:

That’s it. Now you can create invoices and receive your payments. Every transaction can be viewed and managed through the dashboard. Recently, NOWPayments also started allowing fiat-to-crypto and crypto-to-fiat transactions.

As with any investment in cryptocurrency, both Ethereum and Ethereum Classic carry inherent risks due to market volatility. These concerns become more prominent if you are planning to hold onto the received payments in the form of one of these coins.  ETH is undoubtedly the more popular choice when compared to ETC. With continuous growth and development, it should soon offer more functionality and faster-operating speeds for transactions. It is less desirable to use Ethereum Classic due to its smaller user base and resistance to moving away from the proof-of-work algorithm.