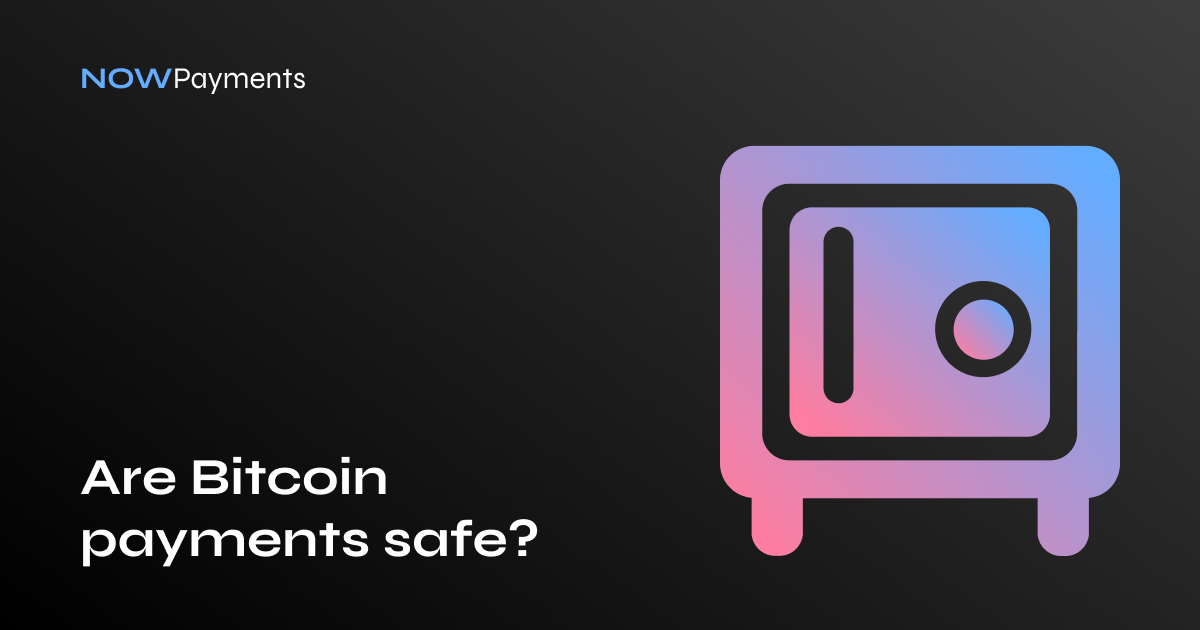 It is impossible to deny that Bitcoin is the absolute king of crypto. At the same time, the Bitcoin blockchain was launched more than a decade ago, which naturally raises concerns over the relevancy of its technology. Security is one of the main topics discussed by Bitcoin enthusiasts causing them to ask questions such as “Is Bitcoin payment safe?”. A closer look at Bitcoin shows that there are no reasons for worry about the integrity of the Bitcoin blockchain since it is extremely solid. This makes accepting Bitcoin payments safe. If you own a business and wish to set up a Bitcoin payment gateway, you can do it using NOWPayments’ solutions.

Bitcoin is a cryptocurrency that runs on blockchain technology, a decentralized ledger which is digitally distributed and public. All Bitcoin transactions get grouped into blocks which then get added to the network. As a result, information about each transaction is stored permanently on servers called nodes. Any individual with a computer can deploy their own node.

Bitcoin is stored in digital wallets, which can be accessed only with the help of a private key, which is similar to a secret PIN from a bank account. The private key is an element that unlocks Bitcoin funds. There is also the public key, which functions as a bank account number and it is necessary for depositing Bitcoin in the wallet.

What are the advantages of receiving Bitcoin?

Bitcoin payments possess many advantages, one of them being the absence of chargeback fraud. Essentially, when a Bitcoin transaction gets settled, it cannot be reversed. As a result, there is no possibility for a chargeback.

Bitcoin is decentralized, which means that there are no formal registration procedures requiring full disclosure of users’ identities. Thus, stores can benefit from deploying a Bitcoin payment gateway by providing clients with a private method of paying for their products and services.

Bitcoin is also excellent for conducting international payments. Standard bank transfers can take days when money is transferred between people living in different countries. In the case of Bitcoin, such transactions take only several minutes, depending on the network load.

The Bitcoin blockchain is resistant to attempts of hacking since in order to conduct an effective attack, 51% of the network must be controlled by attackers, which is too expensive. Basically, the possibility of such an attack is extremely low because today, the Bitcoin blockchain is more powerful than all the supercomputers in the world put together.

Moreover, the private and public keys mentioned above also contribute to the safety of Bitcoin payments. Yet, to avoid facing any problems with security, it is necessary to store funds in a non-custodial wallet which lets the owner hold the private key to their funds.

Bitcoin is a secure payment method that can be safely used both by merchants and consumers. NOWPayments provides tools for accepting Bitcoin as payment.