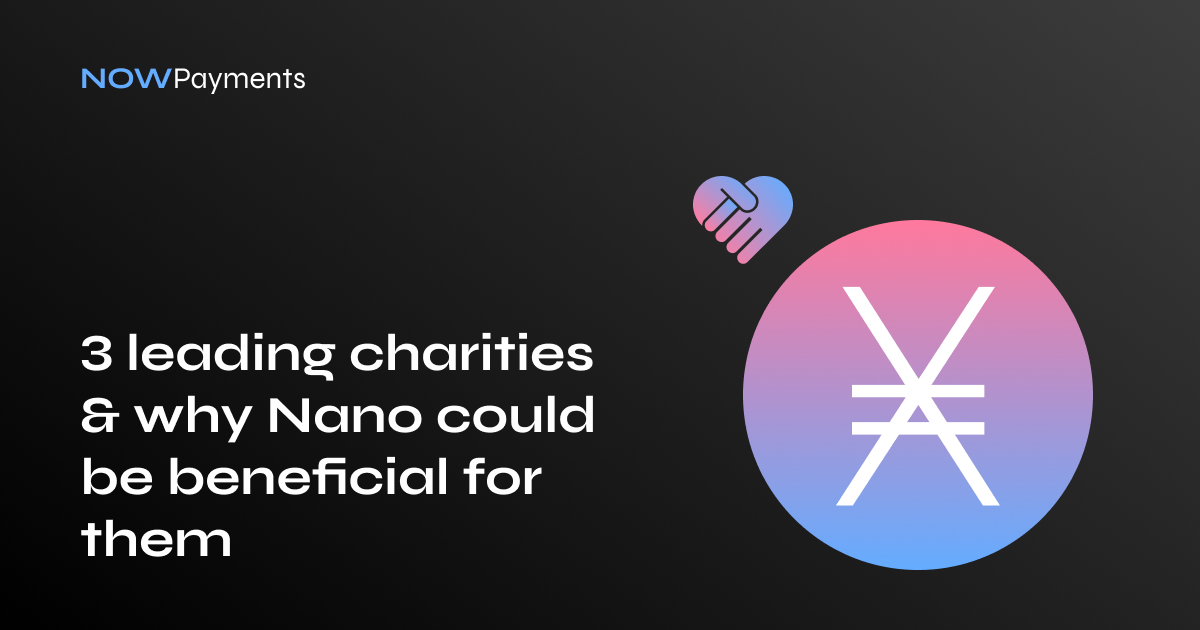 Cryptocurrencies provide many opportunities for both commercial enterprises and non-profit organizations. Donations are one of the common use cases for cryptocurrencies, and charities can get many benefits out of using them. There are already several charities, including the Global Red Cross, which accept Bitcoin and altcoins, yet they still constitute a minority. Out of all cryptocurrencies available on the market, nano, the native currency of Nano Foundation, seems like the most suitable coin for charities. Organizations such as WWF, Doctors Without Borders, and Global Fund for Women currently do not accept crypto, but by setting up a nano donations method, they can really advance their causes further. NOWPayments’ crypto donations tools are a perfect solution for charities wanting to accept nano donations.

The Nano project was launched in 2014 under the name RaiBlocks by Colin LeMahieu. In 2018, it underwent a rebranding and became Nano. nano is the native currency of Nano and it is decentralized and sustainable. The main goal of nano is the provision of simple peer-to-peer transfer of value.

WWF is an organization that has been working for more than 60 years to help people and nature thrive. WWF is the world’s leading conservation organization. WWF operates in nearly 100 countries. The charity collaborates with people and organizations around the world to develop and deliver innovative solutions that protect communities, wildlife, and the places in which they live. WWF works to assist local communities, conserve natural resources, transform policies toward sustainability, and protect and restore species and their habitats. WWF relies on cutting-edge conservation science and has more than 1 million supporters in the United States and 5 million globally. WWF has partnerships with communities, companies, and governments. You can find WWF on Twitter.

Global Fund for Women is an international charity working to build a world where movements for gender justice have transformed power and privilege for a few into equity and equality for all. Global Fund for Women was established in 1987 by four bold women: Anne Firth Murray, Frances Kissling, Laura Lederer, and Nita Barrow. They were convinced that women’s human rights were essential to social, economic, and political change around the world for the benefit of all. Today, Global Fund for Women is the leading funder of gender justice organizations, initiatives, and movements worldwide. The organization provides core, flexible funding and resources to feminist activists to drive gender equality around the world. Add the fund to your following list on Twitter.

Why accepting nano is a good choice for charities

Sustainability is a factor that cannot be ignored nowadays, especially by organizations that promote eco-consciousness, such as WWF. Donors expect charities to be environment-friendly and hold themselves accountable to the highest sustainability standards. There are many ways in which charities can demonstrate their commitment to sustainability, and featuring nano donations is one of them. The Nano blockchain prides itself on being eco-friendly. The Nano network, by avoiding mining, does not have any substantial impact on the environment, especially when compared to Bitcoin and Ethereum. By offering nano currency as a viable donation method to their audiences, charities can deliver on their green commitments.

Every charity which uses the standard donation methods has to pay bank fees. Quite often, bank fees can get so outrageous that it does not make much sense for some people to donate at all. Moreover, even small fees eventually add up and turn into sizable sums. Nano lets its users transfer nano coins for free. Essentially, by deploying a nano donation gateway, charities can help their donors save a lot of money and get larger donations as a result.

In today’s globalized world, charities must establish an international presence and attract donors from all over the world. Yet, the problem here is that the existing banking infrastructure still has geographical limits which can prevent people from sending donations. Nano transactions are a great alternative to the traditional money transfer methods since they are borderless and take less than 10 seconds to complete.

Many people prefer to make anonymous donations, yet the mainstream methods of transferring money all entail disclosing one’s private information. In order to use Nano, one does not need to register and provide personal information. By featuring XNO donations, charities can offer their donors a safe and private way of making donations. XNO transactions can assist charities in building a donation infrastructure that is reliable and confidential.

How to accept Nano donations

Charities have plenty of options for deploying their nano donation gateways. NOWPayments offers three tools for accepting Nano donations. For instance, charities can place nano donation widgets and buttons on their websites. Moreover, they can feature nano donation links by putting them on social media.

Charities also can provide donors with a donation subscription which will involve sending reminders with their chosen frequency that will include the link to the invoice they created.