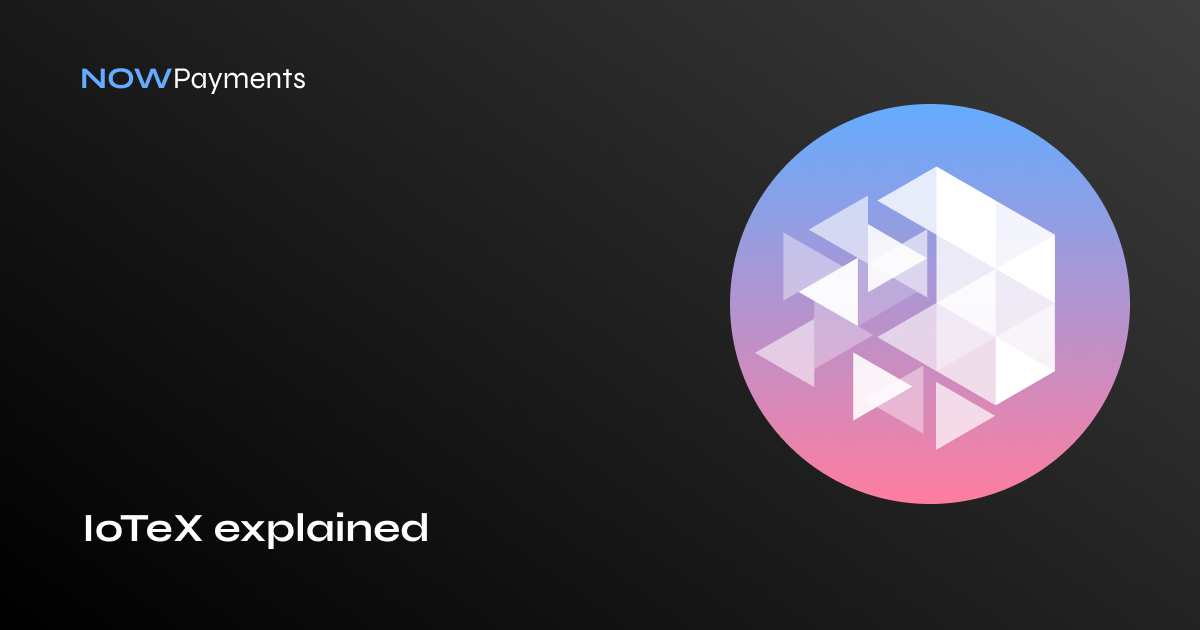 IoTeX is a blockchain that seeks to offer solutions for real-world problems and bring utility using innovative technology. IOTX, the native cryptocurrency of IoTeX plays a major role in the operation of the project. IoTeX is a truly unique network which already can boast several successful use cases and a great number of investors who support the project by holding IOTX in their wallets. IoTeX is a project with massive potential that every crypto enthusiast should take a close look at. Read this article to learn more about IoTeX and how you can start accepting IOTX payments.

How does Iotex work?

IoTeX began in 2017 as an open-source project. It was developed from scratch and was intended to be a solution for Internet of Things (IoT) use cases. The mission of IoTeX is to build an open ecosystem enabling people and machines to interact with guaranteed trust, free will, and privacy. The platform combines blockchain and secure hardware confidential computing.

The IoTeX has a team of top-tier engineers and scientists and its platform is maintained by more than 60 global Delegates including Blockfolio, CoinGecko, and DraperDragon.

Why IoTeX is unique

IoTeX has one of the strongest teams in the crypto industry and it is at the forefront of cutting-edge tech in both blockchain and IoT space. IoTeX was selected as the Co-Chair of the Industrial Internet Consortium (IIC) Blockchain Group along with Amazon and Huawei.

IoTeX wants to offer an alternative infrastructure for smart devices like cameras, thermostats, and virtual assistants which are being installed in homes and businesses at a blistering rate. Such devices are equipped with WiFi and powerful sensors to make them “smart” which is called the Internet of Things (IoT). IoT lets people interact with devices to drive efficiency and create value.

Yet, the mainstream IoT solutions are owned and controlled by institutions such as tech giants and not users. As a result, all IoT data, such as video recordings from people’s home cameras, are owned by such organizations and thus can be manipulated without people’s consent.

IoTeX’s goal is to end the monopoly of institutions and bring power back to the people. Essentially, IoTeX wants to create a future which is connected and safe without ads and surveillance. The platform allows developers to build privacy-preserving IoT devices, apps, and networks.

For instance, Ucam is the world’s first private security camera that uses IoTeX’s solutions and is built in partnership with Tenvis, a hardware giant which is currently Amazon’s Choice for cameras. The IoTeX community already has access to Ucam and they can purchase its products.

Pebble Tracker is another project which is powered by IoTeX. It is a decentralized asset tracking device that was developed in partnership with Nordic Semiconductor, one of the largest global chip manufacturers. Pebble Tracker is paired with IoTeX’s Edge Oracle which allows it to write verifiable, real-world IoT data including location, motion, and climate information, to the blockchain for use in smart contracts.

Does IOTX have value?

IOTX exists on the IoTeX blockchain and has a total supply of 10 billion IOTX. Nevertheless, the supply of IOTX will gradually decrease over time. IoTeX has an innovative tokenomics design. For instance, 1 Billion IOTX which is 10% of the total supply will be Burn-Dropped as the project onboards the first 1 million devices powered by the platform. Out of the 1 Billion IOTX to be Burn-Dropped, 90% will be burned and 10% will be distributed to voters that auto-stake.

Essentially, the Burn-Drop program will imply taking a total of 900 million IOTX out of circulation. Additionally, the process will be facilitated by a smart contract, so a new Burn-Drop will be triggered after every new “Powered by IoTeX” device is onboarded. Thus, the slow reduction in the supply of the cryptocurrency will make it scarce and potentially more valuable on the market.

Since IOTX is the native cryptocurrency of IoTeX, its value stems from its utility within the IoTeX ecosystem. IOTX has multiple uses with the ultimate goal of facilitating trusted and transparent interactions between various entities in the IoTeX Network such as Delegates, stakeholders, developers, service providers, as well as consumers. For instance, IOTX is used to pay for gas fees. Essentially, whenever a transaction is sent on the IoTeX network or a contract is created or used, users need to have IOTX to pay fees.

Another major utility for IOTX is the Stake-for-Governance feature which is crucial for users that want to vote for Delegates to run consensus and participate in the development of the network. There is also the Stake-for-Service option which is necessary for providers servicing users and their devices. IOTX is also used to make device registrations. Users need to stake/burn to register trusted devices.

How to accept IoTeX payments

Businesses can become part of the IoTeX ecosystem in various ways, including by accepting IOTX payments. Online merchants can install special plugins which are intended specifically for the following platforms: PrestaShop, WooCommerce, Magento 2, WHMCS, OpenCart, Zen Cart, Shopify, and Shopware. These plugins automate all payments and let companies get IOTX payments.

Businesses also can issue crypto invoices and use a virtual Point-of-Sale terminal. Such tools enable merchants to get more control over their crypto payments. Moreover, there is an option of featuring subscription-based IOTX payments.

IOTX is a cryptocurrency with a powerful utility which drives its value forward. NOWPayments enables companies to accept IOTX payments.