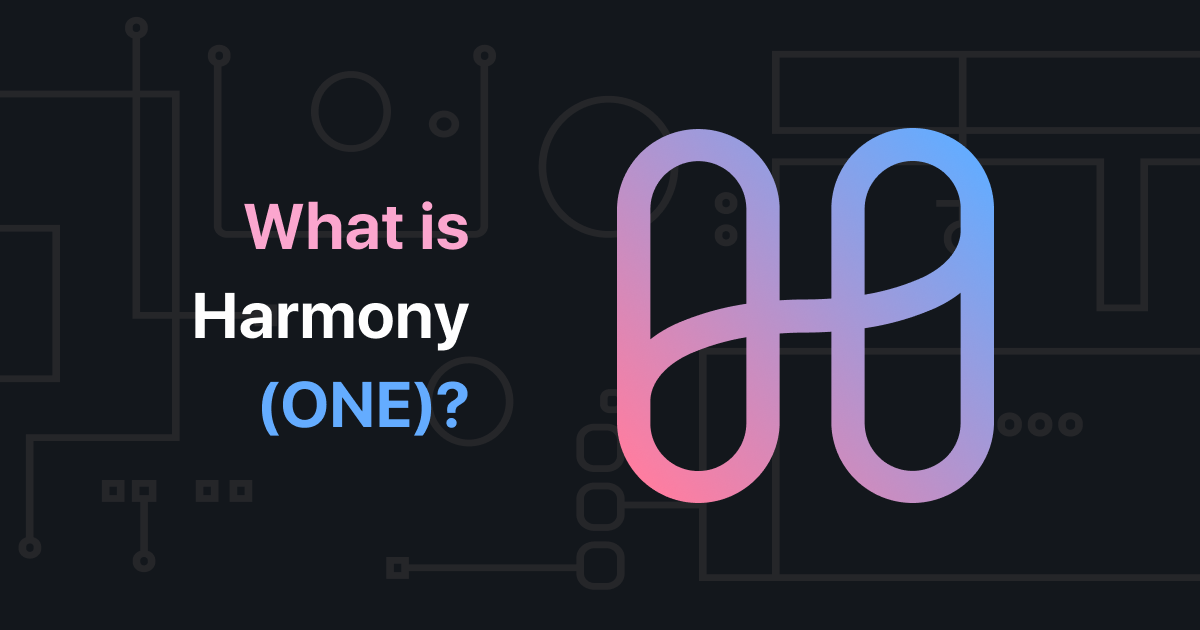 Since the launch of the Bitcoin network, the blockchain community encountered a so-called trilemma. Namely, developers could not build a blockchain which would simultaneously be secure, scalable, and decentralized. Maxing out two of the aspects was possible but the third component was difficult to squeeze in into one package. For example, the Ethereum network despite utilizing a novel approach to blockchain failed to deliver on the scalability facet. As a result, Ethereum transactions still take too much time, especially in the era when speed is vital.

Harmony is a project which aims at becoming a platform that finally will be able to bring together security, scalability, and decentralization without compromising on any of them.

In its essence, Harmony is the continuation of the blockchain evolution, a project that takes the existing technologies and perfects them. For example, Harmony’s key sharding process was first introduced by Zilliqa, yet its solution was imperfect since it involved certain issues related to security and decentralization. Harmony managed to greatly improve the sharding technology and made it its main advantage. Harmony launched its mainnet in 2019. Thanks to the efforts of its team, Harmony has managed to grow from a niche blockchain to one of the most promising networks on the market in a matter of three years.

Why Harmony is Revolutionary

Harmony has earned the status of a project which is constantly presenting new additions to its network, thus enhancing its capacity. Harmony has already reached a major milestone after which this blockchain can truly be considered revolutionary. Namely, Harmony established a two-second block finality on its network. This move helped it significantly minimize the transaction latency for its users. In other words, all transactions happening on the Harmony blockchain take only two seconds. Moreover, people who send Harmony tokens are not the only ones who benefit from this feature. Due to the low latency, Harmony is an ideal network for deploying decentralized applications which require instant processing of its operations.

As already mentioned, Sharding constitutes the backbone of the Harmony network. Harmony designed and implemented a sharding scheme which is scalable. Moreover, Harmony’s sharding is provably secure since the network utilizes distributed randomness generation (DRG) process. Sharding on the Harmony blockchain involves a beacon chain and numerous shard chains. The beacon chain acts as the randomness beacon which generates an unpredictable number that determines the sharding assignment for each node. The shard chains, in their turn, contain separate blockchain states and engage in the processing of transactions concurrently. Randomness generation is Harmony’s priority and to ensure it, the network implements both Verifiable Delay Function (VDF).and Verifiable Random Function (VRF).

Another key technology of the Harmony blockchain is the Proof-of-Stake consensus protocol which contributes to the network’s scalability, security, and decentralization. Harmony’s approach to PoS is called Effective Proof-of-Stake and it constitutes an improved technology. Harmony’s Proof-of-Stake protocol decreases the degree of centralization and maintains a model of fair reward distribution to the validators who stake their crypto to ensure the security of the network. Harmony uses the staking method which supports reward compounding and delegation. This makes the network more decentralized. To ensure that Harmony is open for participation, the Effective Proof-of-Stake penalizes nodes that are unavailable despite being elected.

Harmony’s Proof-of-Stake protocol also lets the blockchain minimize the impact on the environment. Essentially, the network’s Proof-of-Stake protocol is an alternative to the Proof-of-Work mechanism that multiple blockchain including Bitcoin employ. PoW raises concerns in the eco-community since it involves the process of mining which requires a lot of computational power and subsequently large volumes of electricity. For instance, the Ethereum network annually requires 56.45 TWh of electricity which is comparable to Romania’s energy consumption. Harmony’s solution to this problem is its Proof-of-Stake consensus mechanism which uses energy-efficient staking instead of mining. Thus, Harmony can boast a minuscule carbon footprint.

ONE token is the currency of the Harmony network which performs various on-chain functions. For instance, users pay transaction fees in ONE token. It is worth noting that Harmony’s transaction fees are among the lowest ones in the industry. A transaction on Harmony’s blockchain can cost its sender as little as 0.000000001 ONE. Users also must employ ONE token to participate in the governance of the blockchain if they wish to influence the future development of the network. ONE token is the only currency which users should utilize for staking to earn rewards. Additionally, since Harmony manages to keep its block finality at two seconds, ONE token transactions are virtually instant.

dAvinci is the project which exists on the Harmony blockchain. daVinci is a new NFT marketplace where people get a chance to create their NFTs and trade them without any limitations. Moreover, as we know, Harmony is a fast blockchain which allows its decentralized applications to operate at great speeds. As a result, all dAvinci operations are processed instantly. Users can conduct an NFT transaction in two seconds, Additionally, dAvinci offers one of the lowest prices for minting NFTs, namely, less than $0.01.

Harmony Soccer Players is another example of a decentralized application deployed on the Harmony blockchain. It is a game where players can trade cards of soccer players. Each card is a separate NFT collectible. Every time players buy a card, its value increases by 15%, while the seller makes a profit of 13%. Cards are always available for purchase.

It is clear that Harmony is a blockchain which can boast great advantages compared to its competitors. The excellent transaction speed of two seconds, extremely small transaction fees, as well as minimal impact on the environment. Thus, accepting ONE token can be a reasonable decision for any company or non-profit organization. NOWPayments is a non-custodial service which provides easy-to-integrate solutions for deploying a ONE payment gateway.

For example, businesses can use NOWPayments’ crypto invoices which have a great UI and feature all details about the crypto payment. Crypto invoices do not require obligatory updating and can be used indefinitely. If your company operates in the eCommerce sphere and has a website on platforms such as Shopify, WordPress, Shopware PrestaShop or you utilize services such as Magento 2, Zen Cart, and OpenCart, then you can use ecommerce plugins. These plugins make the automatic processing of crypto payments a part of your business infrastructure.

Non-profit organizations, charities, and bloggers can also benefit from accepting ONE tokens. NOWPayments has designed crypto donations widgets, buttons, and links that let users accept ONE crypto donations and donations in 60 other digital assets. These widgets and buttons will fit perfectly on your social media page or website.

Harmony delivers amazing utility to the projects deployed on its blockchains and people who use the platform for their purposes. Low fees and an exceptional transaction speed make Harmony’s ONE token an ideal candidate for businesses that wish to feature crypto payments. NOWPayments has a variety of solutions that can help any organization to begin accepting ONE token.