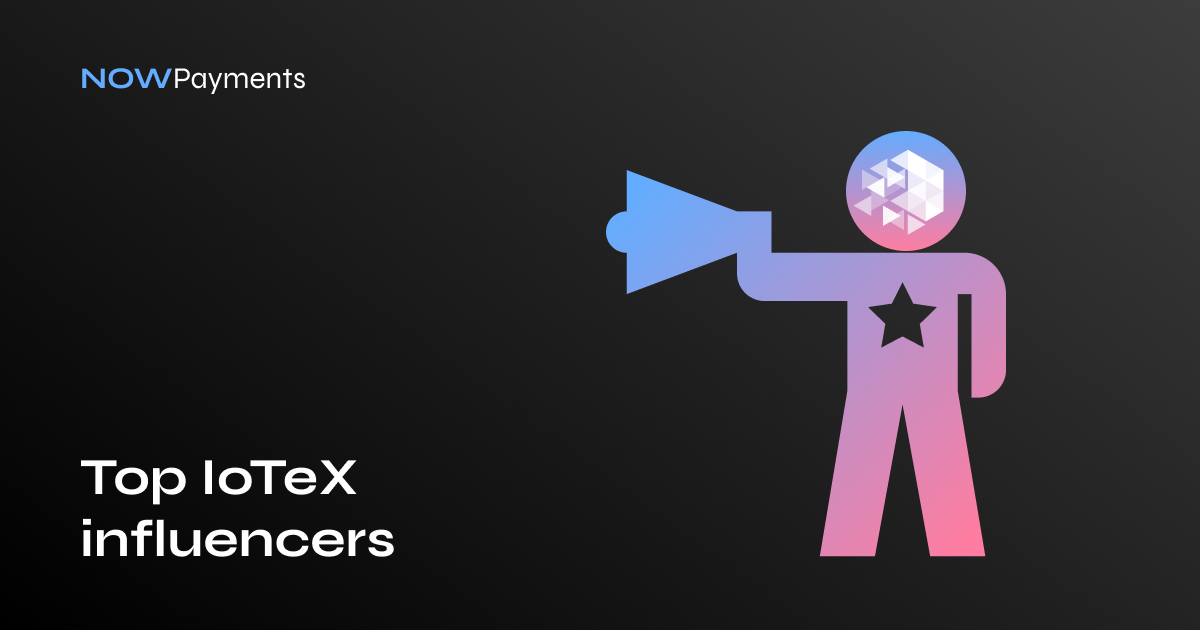 The utility is the king in the current crypto market. Blockchains which fail to deliver any functionality instantly face obscurity. As a result, networks are striving to offer unique solutions and thus beat their competitors. IoTeX is a project which runs on state-of-the-art technology and provides exceptional utility for its users. IoTeX is one of the leading blockchains that offers a decentralized ecosystem where humans and machines can interact with guaranteed security and trust. Since IoTeX is so popular, it has many influencers that promote it online. If you invest in IOTX, you should certainly follow these influencers on social media.

Why is Iotex so popular?

Before diving into the list of coolest IOTX influencers, let’s find out why IoTeX is so popular. The biggest advantage of IoTeX is that it is building the first decentralized ecosystem where humans and machines can interact. Moreover, such interactions are characterized by guaranteed trust, free will, and privacy. The vision of the project is to create the Internet of Trusted Things, a place where users will exclusively own and control their devices, as well as the data and value they generate. IoTeX empowers users to capture value from the data/devices they own. Essentially, IoTeX provides a new way of managing data, and it is extremely popular since there are no alternatives. IoTeX’s native cryptocurrency IOTX is held by thousands of investors who believe in the great future of the project.

So who are the Top IOTX influencers?

Jing Sun is one of the co-founders of IoTeX and a founding partner of Sparkland Capital. She is also a builder for Web3 and MachineFi. Jing is a core member of the IoTeX team, and therefore she possesses an incredible insight into the project and all of its initiatives. In her Twitter, Jing extensively covers all news related to new IoTeX use cases. Jing is not one of those Twitter personalities who make dozens of tweets a day. Instead, her rare tweets carry interesting information which is worthy of every IOTX investor’s attention. So, if you are an IoTeX enthusiast, have IOTX coins in your crypto wallet, and want to know all the latest news about the project, Jing’s Twitter should be in your bookmarks.

Raullen Chai is another co-founder of IoTeX. He has worked as a Cryptography Research Scientist at UWaterloo and Security Engineering Lead at Google. Raullen’s Twitter is a mix of his insightful thoughts and news about the IoTeX ecosystem. By reading Raullen’s Twitter, you will discover cool use cases of the IoTeX infrastructure. Raullen regularly writes about the latest additions to the line of IoTeX-powered products. Additionally, Raullen often shares his perspectives and takes on the crypto world in general. Raullen also posts info about IoTeX’s performance which can be interesting for IoTeX developers and people who closely interact with the network. For instance, recently, Raullen announced that IoTeX was one of the leading blockchains in terms of the number of relays.

Qevan Guo is also a co-founder of IoTeX, which means that he has the most extensive knowledge about the project and its ecosystem. Qevan’s followers on Twitter get access to the news on the relevant developments concerning IoTeX. Qevan shares fascinating info about the project and its latest achievements. For example, Qevan was among the first people to announce that IoTeX’s Total Locked Value surpassed $200 million. Such news can really put a smile on every IOTX investor’s face. Qevan’s Twitter is also definitely worth following for IoTeX developers. He recently tweeted that those who provide API services for IoTeX could contact him to get listed on iotexapi.com. So, Qevan’s Twitter account is a great find for every IoTeX enthusiast, no matter whether you simply invest in IOTX or work on developing IoTeX-based solutions.

Simone Romano is a member of the IoTeX team. Simone focuses on Developers Community Growth. Simone is also an industrial automation engineer, machine vision engineer, and blockchain enthusiast. Although Simone makes tweets only occasionally, they often contain many great insights that every IoTeX investor and fan will be excited to learn about. Simone dedicates many of his tweets to the promotion of Pebble, a breakthrough blockchain-powered device that captures physical world data to give you trusted information about real-world events in real time. For instance, Simone demonstrated to his followers that he was in Denver by using Pebble. So, if you also use Pebble or want to try it out, Simone is the person that you need to follow to learn more about the device.

Larry Pang is an IoTeX team member who is responsible for the management of the ecosystem. In his Twitter bio, Larry calls himself a futurist of IoTeX. Larry successfully promotes IoTeX and its solutions both online and offline. Recently, he gave a speech at World Blockchain Summit which took place in Dubai. Larry attends many conferences, so every IoTeX fan has a chance to meet him. In his Twitter, Larry frequently offers his perspectives on the most topical issues in the crypto industry. For instance, he presented his view on the recent Wormhole hack and the cross-chain protocols, which have been particularly popular in the past several years. So, Larry’s Twitter is also an excellent place for discussions on the biggest news in the crypto world.

IoTeX PUNKS is one of the biggest NFT projects in the crypto industry, which is also deployed in IoTeX’s blockchain. The project includes 10,000 limited, unique, and visually custom-designed IOTEX XRC721 NFT Punks which are algorithmically generated with individual Rarity Rankings. Apart from the NFTs themselves, the project has an amazing community of people who own IoTeX Punks. If you ever thought of getting an NFT, IoTeX Punks is a project in which you can definitely invest. The project has its own Twitter account, where it shares news about the latest additions to the Punk’s ecosystem. This NFTs project shows how versatile IoTeX is. The Punks are extremely popular, which means that there are many people interested in the products deployed on the network.

IoTeX has an official Twitter account. This is the perfect place for those who want to get pure information and news. IoTeX does not post personal perspectives and views of the project’s team. Instead, the account is dedicated to informing the audience about everything related to IoTeX and its advancements. Essentially, this account is all you need to have in your following list to stay updated on the IoTeX developments. For instance, the official account was the first to publish news about the new $100m Sustainable Ecosystem Fund created by IoTeX, which will provide assistance to builders across MachineFi, DeFi, GameFi, NFTs, and DAOs. Give IoTeX’s Twitter account a follow to stay in the know and be aware of everything you need to know about the project and the direction where it is heading.

IoTeXPad is the first native launchpad built on IoTeX. The project has 6 tiers (Bronze, Silver, Gold, Emerald, Ruby, VIP), all of which represent a staking requirement, ranging from 500–40,000. It is a community-based tiers structure with pool weight being the primary determining factor for allocation size, allowing for an equitable investment procedure. The launchpad has an official Twitter account, where investors can track the development of new projects and the latest launches. The account is convenient for everyone who wants to instantly discover all the new products emerging in the IoTeX ecosystem and have a chance to invest in them early to get the highest return on investment.

Claire Biasco is also one of the members of the IoTeX team. Claire is responsible for the ecosystem marketing of the project. Claire’s feed mostly consists of the most relevant IoTeX news, so you are guaranteed not to miss out on anything important if you follow Claire’s Twitter account. Claire occasionally talks on the topic of IoTeX and its ecosystem. For example, recently, she participated in an AMA session with StarCrazy where she talked about GameFi community. Claire often shares interesting articles about IoTeX and the crypto industry, so her account is a great place for everyone who wants to get more info on IoTeX and blockchain.

IoTeX has an amazing community and dozens of great influencers. NOWPayments contributes to the advancement of IoTeX and offers solutions for accepting IOTX payments and donations.