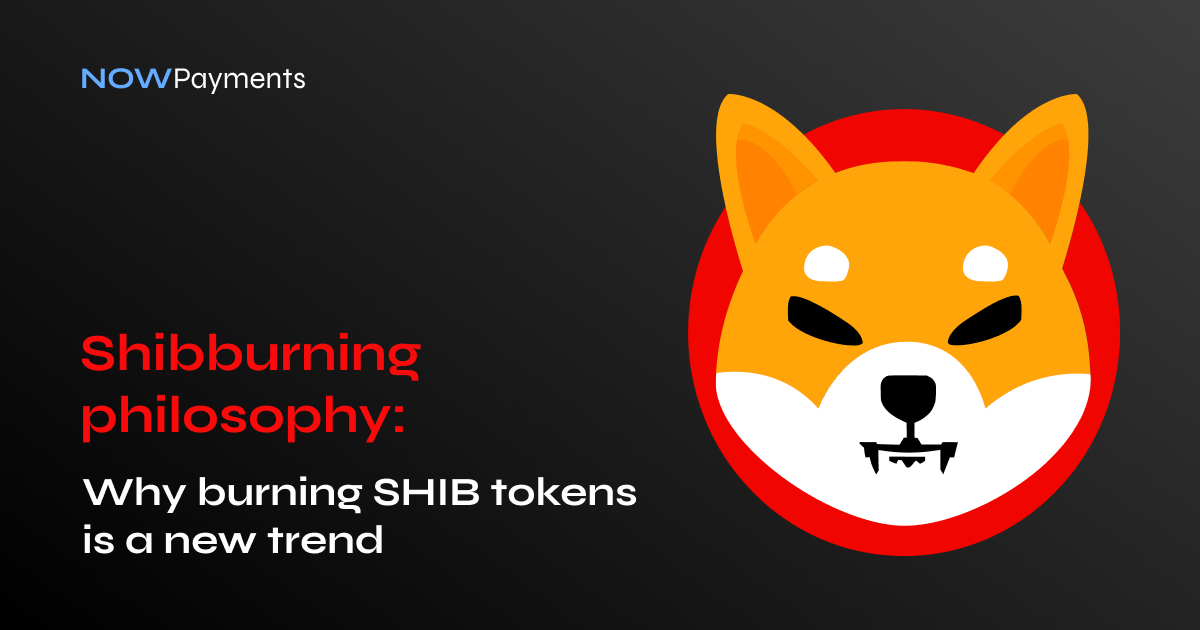 The Shib token entered the crypto industry a little over a year ago. At the same time, it has already made waves by disrupting the status quo of the canine segment of the crypto market, previously dominated by the DOGE coin. Although Shiba has not yet earned the privilege of being present in Elon Musk’s crypto portfolio, the current Shibburning trend might potentially launch the value of the token to the moon in the near future. Read our article and learn why people burn SHIB and how you can participate in the process by using NOWPayments’ SHIB payment gateway.

Let’s first dive into the basics of the Shiba Inu token. SHIB was minted on the Ethereum network as an ERC-20 token in August 2020. The name Shiba Inu comes from the breed of Japanese dogs. The dog of the same breed was used in a popular meme, which then became a symbol of the DOGE coin. As a result, SHIB was initially intended as a meme token. Nevertheless, over time, the Shiba Inu coin turned into a full-blown Defi project with its own ecosystem. Today, in addition to SHIB, there are tokens called BONE and LEASH which together make up ShibaSwap, a decentralized exchange developed by the Shiba coin team.

What is SHIB known for?

It is clear that SHIB would not be as popular as it is today without massive publicity, which has drawn hundreds of thousands of crypto investors to it. SHIB received the most extensive media coverage when it transferred half of its supply to Vitalik Buterin’s address. Vitalik Buterin is the founder of Ethereum, and the SHIB sum which he received made him a billionaire. Yet, Vitalik refused to rest on his laurels and burned 90% of his holdings while donating 10% of it to India’s Covid Relief Fund. The burn made by Vitalik became one of the biggest ones in the history of crypto since the total sum he disposed of equaled 6 billion dollars. Such an event quickly made it to all major media around the world, instantly making SHIB one of the most popular coins on the market.

What is coin burning in the first place?

Why do people burn SHIB?

Vitalik’s burn not only became a historical event but also inspired thousands of other investors to follow suit and do the same. But the question is: Why would someone intentionally get rid of their money? The answer is simple. People burn their crypto, including SHIB, to reduce the coin supply in circulation and thus make the asset scarcer. Rarity is what, to a substantial extent, drives the price of cryptocurrencies forward. By burning their coins, SHIB investors wish to fuel the rise of the asset’s value.

Should I burn SHIB, too?

Many SHIB enthusiasts engage in regular Shibburning. Yet, burning is always optional and depends on your particular preferences. Burning even a small sum contributes to incremental deflation and potential price growth.

NOWPayments is proud to support the Shibburning initiative. We are committed to taking a share of our SHIB earnings and allocating it to burning. Recently, we conducted a Shibburn, and here is the hash of the transaction.

If you also wish to participate in the Shibburning but do not want to part with your tokens, then you can do it indirectly by using NOWPayments’ SHIB payment gateway solutions. For instance, by accepting SHIB as payment on NOWPayments, a certain amount of your fees will be sent to a burn address.

Who accepts SHIB via NOWPayments?

SHIB is already accepted by some of NOWPayments’ great partners. Here’s a hint of what to expect from the SHIB Merchant directory we have announced earlier.

Shiba Swag is an online store that was started by a #SHIBArmy activist. His goal is to make ShibArmy “UNITED, STRONG, and FUD-LESS”. Having experience in e-commerce, he started Shiba Swag, providing the community with cool products, such as mugs, T-shirts, phone cases, hoodies, and so on. 15% of sales will be converted into SHIB and burned.

ShibaInuCafe is a unique place in Chiang Rai City, Thailand. Also run by ShibArmy members, this cafe offers fresh plant-based food. The visitors may even try Shibasco sauce, made of the best Thailand-grown chili peppers. What’s coming next for them? The enthusiastic team behind the project is planning to open ShibaInuCafe in every capital city, and after that — the Shiba Hotel!

What can you get for a person who has everything? Expressiffy knows the answer! This online store offers personalized and customized sequin shirts as well as beautiful pieces of their own design. Besides apparel, Expressiffy offers customized AirPod cases, phone grip rings, pillows, teddy bears and other accessories.

Green Juice Systems is a Swiss company that brings its clients the latest technology in new solar power equipment and gadgets. Their mission is to help our planet to be cleaner for future generations by lowering the carbon output and making donations to help climate protection projects.

Shiba Army Movement is a project that is dedicated not only to the ShibArmy but also to helping those in need: children with serious illnesses and their families, as well as veterans. This project is worldwide and, as the website says, “transcends borders and languages”. You can do your part by donating SHIB.

SHIB has an army of dedicated followers who support every new project and initiative of the coin and the team behind it. The burning of 6 billion dollars worth of SHIB by Vitalik Buterin inspired thousands of SHIB holders to do the same. Now, Shibburning is one of the largest crypto-burning movements in the industry. NOWPayments fully supports this movement and is willing to make its contribution to it.