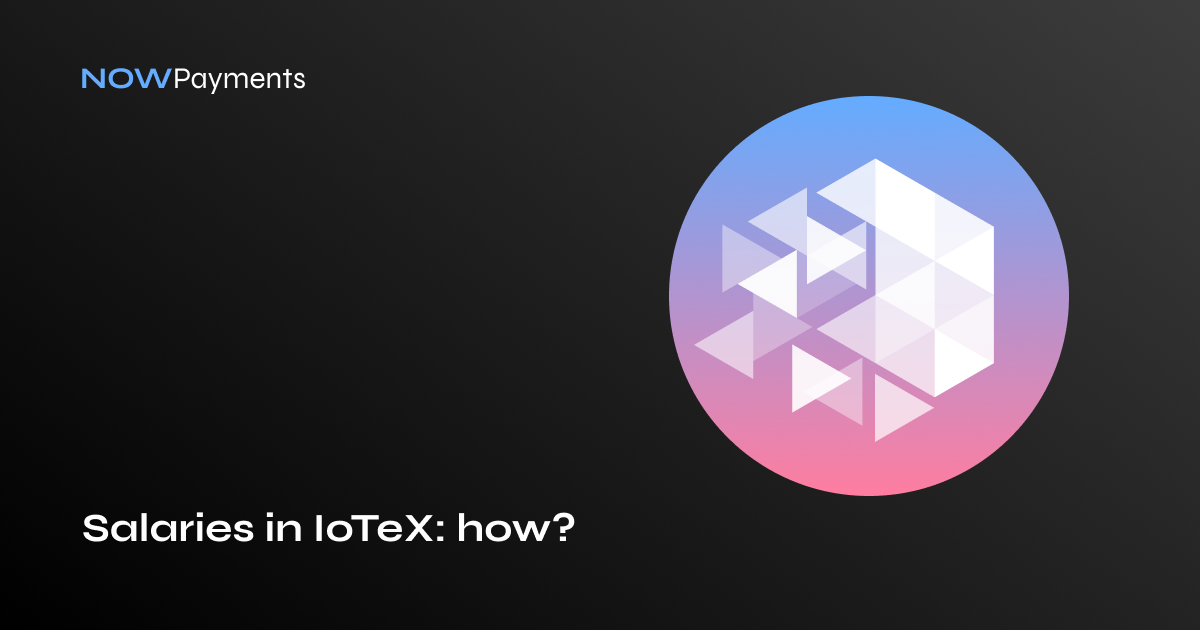 Speed, security, and scalability are pretty much the three most crucial components for modern blockchains. IoTeX is one of such networks. IoTeX offers extremely efficient blockchain infrastructure and possesses massive utility. IoTeX is utilized by dozens of projects in the realm of IoT technology. Additionally, IoTeX powers a cryptocurrency called IOTX, which is popular among crypto investors and users. The features of the IoTeX blockchain make the IOTX crypto perfect for payments and salaries. NOWPayments’ Mass-Payments feature enables businesses to send IOTX cryptocurrency salaries.

What’s good about salaries in IOTX?

Blockchains are anonymous systems. The anonymity guaranteed by blockchains can enable businesses to ensure privacy for their employees. Despite the fact that the majority of blockchains on the market, including IoTeX, are transparent, meaning that they make information about transactions available to the public, they do not require users to reveal their identities. In other words, when using IoTeX to make IOTX coin transactions, users can stay completely anonymous. Basically, the IOTX crypto transactions are not tied to the names of the sender and recipient. Subsequently, while information about each transaction is open for anyone to see, it does not indicate the two people behind it.

Modern companies should respect the confidentiality of their employees. It is particularly important when it comes to financial transactions. The traditional services such as banks or payment processors like PayPal do not offer the same level of privacy as the IoTeX blockchain. This is why the IoTeX coin is the perfect option for businesses that want to pay salaries in a private manner.

The most widespread method of paying salaries used by millions of businesses worldwide is bank transfers. Although it is a tried-and-true way of conducting money transfers, it has certain shortcomings which can be resolved with the help of IOTX. One of the main problems of bank transfers is the long periods of time that these transfers take. For instance, money sent on Friday may not arrive until Monday due to banks not working on the weekend, which is a common practice in numerous countries worldwide.

Cryptocurrency transfers do not have such problems. Basically, IOTX transactions are processed instantly thanks to the IoTeX blockchain’s efficient processing. One IOTX transaction takes only seconds, and its speed is not affected by any factors such as the distance between the sender and the recipient. So, when companies pay their employees in IOTX, they can be certain that their workers will get their money without delays and in time.

Apart from a lackluster performance in terms of the speed of transactions, bank transfers are also subject to another significant problem, namely, expensive fees. Basically, when businesses use bank transfers, they end up being charged large fees, which consume a share of every transfer and cause businesses to spend more money. At the same time, cryptocurrencies such as IOTX present a great solution to this problem. Basically, IOTX cryptocurrency transactions do not cost an arm and a leg for users. IOTX is a cryptocurrency that has exceptionally low transaction fees. For instance, on average, you will pay less than $0.01 in fees per transaction. Companies always have to spend a significant amount on fees when paying out salaries, so why not use IOTX to cut these expenses while simultaneously sending salaries more efficiently.

Nowadays, businesses operate globally and therefore employ workers from all over the world, as well as have offices in different countries. In such conditions, paying salaries can be a tall order, given the fact that in order to conduct such money transfers, companies need to observe the laws and rules of many jurisdictions. Quite often, in order to pay salaries to employees abroad, companies are required to open and manage foreign bank accounts. IOTX transactions, on the other hand, are borderless and do not involve registration or KYC procedures. Essentially, companies can pay salaries in cryptocurrencies to employees living in any region of the planet without the need to adhere to the local banking regulations. IOTX transactions work as long as there is an internet connection. So, thanks to IOTX, companies based in California can easily transfer salaries to employees in Sweden in a matter of seconds.

How to pay people in IOTX?

NOWPayments’ Mass Payments tool is intended for businesses that want to facilitate their process of sending salaries. To start paying salaries in IOTX, you need to follow these steps:

The IoTeX cryptocurrency is ideal for salaries. NOWPayments offers a Mass Payments feature for companies that want to send salaries in IOTX.