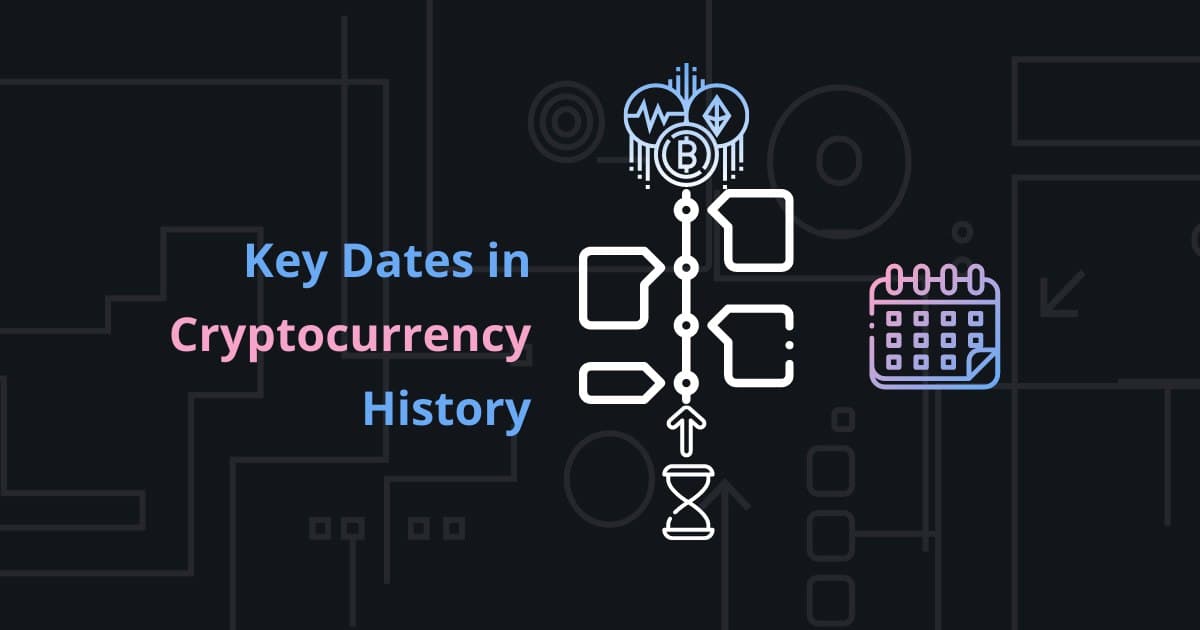 We have listed some of the key dates in cryptocurrency history and explained all of them crisply. The history of cryptocurrency is also the history of popular tokens like Bitcoin and Ethereum. So, you are likely to find more mentions of them in the discussion.

Key Dates in the History of Cryptocurrency Development

These three events mark the history of cryptocurrency development before the most significant thing happened: the launch of Bitcoin.

David Chaum, an American cryptographer, introduces the idea of DigiCash. He had introduced the concept in 1993, and DigiCash is the first known electronic payment to involve cryptographic solving. It’s also one of the basic ideas of a decentralized and untraceable digital currency.

The National Security Agency of the United States publishes an academic paper on cryptography and electronic cash. This paper, titled How to Make a Mint: the Cryptography of Anonymous Electronic Cash, was shared with MIT students and the public.

Wei Dai, a computer engineer, comes with the concept of b-money, which is characterized by anonymity and distributed nature. It was followed by bit gold from Nick Szabo, who was the first to introduce a proof-of-work function to the industry.

This new electronic currency system had utilized many cryptography-based ideas as well.

Key Dates in the History of Bitcoin Development

The following timeline marks the development of Bitcoin, undoubtedly one of the most popular cryptocurrencies, until this point.

Later, another anonymous figure, known today as Satoshi Nakamoto, published an update on the 31st of October 2008 about using cryptography to protect user-privacy during transactions. Along with these words was the link to Bitcoin.org, where the author had published the Bitcoin White Paper.

It should be noted that when Satoshi Nakamoto described the working principle behind Bitcoin, he had used a term called ‘timestamp server.’ However, on the 9th of November 2008, Hal Finney, one of the pioneers in the development of Bitcoin, used the word ‘blockchain.’

The rest of the year marked the fast-tracked development of the original Bitcoin project.

The 3rd of January 2009 marks the generation of the first Bitcoins ever. Using what is now known as the ‘Genesis block,’ the first 50 Bitcoins were generated by the system. Satoshi Nakamoto had complete control over these coins, and they were not sent to anyone.

Later, on the 12th of January 2009, Satoshi Nakamoto transferred some Bitcoins to Hal Finney. It is known as the first-ever Bitcoin transaction. From this point on, Bitcoin had started growing in terms of its value and popularity.

On the 5th of October 2009, Bitcoin was first evaluated. Because the token was in its early stage, the team had to base the calculation on the amount of electricity required to generate a single Bitcoin unit. Based on it, the value of a Bitcoin was set as $0.001.

This year marks the increasing use of the Bitcoin token across the world. One of such instances happened on the 22nd of May 2010. An American developer, Laszlo Hanyecz, offered 10,000 BTC to anyone willing to buy him a couple of pizzas. Ultimately, a British user on the platform decided to get Laszlo two pizzas. We still don’t know who this lucky British gentleman was.

On the 12th of December 2010, Satoshi Nakamoto announced his withdrawal from the Bitcoin project. He’d done this by giving the protocol warning key to Gavin Andresen, who will be pioneering the Bitcoin project’s development later. It is the last time the world has seen any involvement from Satoshi Nakamoto. Even though there have been rumors, there has been no official statement so far.

From this year, we start to see the growth of Bitcoin as a competitive payment system. In February 2011, it took the first step by becoming equal to the value of the United States Dollar. For the first time in the history of cryptocurrencies, 1 BTC was equivalent to 1 USD. It is an essential milestone in progress because the BTC token had only a fraction of its value almost a year back.

On the 15th of June 2011, WikiLeaks announced that it would start accepting Bitcoin as a form of donation. It was an essential step because the organization could not keep accepting payments from VISA, PayPal, or MasterCard at this point. It is a pivotal moment in history because people started to understand the actual power of anonymity that Bitcoin offers.

While there aren’t many important events, 2012 was when Bitcoin became a buzzword in society. Not only tech enthusiasts but also economists started talking about this so-called ‘fake’ internet money. The period also marks the inception of many agencies such as Silk Road, Coinbase, and BitPay. While some of the brands have stood the test of time, some have not.

This year also marked the first halving event in the Bitcoin blockchain history. It was also when many popular brands started accepting Bitcoin payments. At the same time, concerned by the increasing demand for BTC, the Central Bank of Norway announced that it doesn’t recognize cryptocurrencies. The bank also prohibited its staff from investing in cryptos.

In 2013, Bitcoin saw legal action against many countries, some of which banned the cryptocurrency. At the same time, the demand for the token was growing like never before. In the first half of 2013, Bitcoin reached a whopping value of $1213, which was the highest amount by then. Of course, while this move proved the real potential of BTC, this value didn’t last long. In December 2013, the BTC value dropped to $600.

Although the value kept rising and going low, Bitcoin didn’t show any exciting numbers that year.

In 2014, many companies involved in Bitcoin transactions had witnessed many issues. In particular, there’s the issue of Mt. Gox, which was the largest crypto exchange then. The company had filed for bankruptcy, and the FBI investigation followed the whole matter. This incident was a blow to many enthusiasts of Bitcoin investment.

Silk Road was a darknet website that allowed the use of Bitcoin for transactions. This website got shut down in 2014, forcing many to leave the Bitcoin market. At the same time, the official ways to get Bitcoins had an improvement. It is also worth noting that the period marked one of the most stalling periods in the history of Bitcoin and cryptocurrencies alone.

We have to jump to 2017 to see the increasing popularity of Bitcoin and investments in BTC. Most noticeably, the cryptocurrency saw its value rising to a whopping $19787 per coin. This incident had shocked the whole world, and everyone had regrets for not purchasing Bitcoins when they cost less than a decent meal. Following this, more people had jumped into mining and Bitcoin-based applications.

In December 2018, BTC witnessed another low point in its history. The value of a single Bitcoin was brought down to a mere $3300 from the five-digit figure. Of course, based on the idea that the token would pick up its demand, more people bought Bitcoins and started investments. It’s worth noting that the value of BTC wasn’t strictly stable at this point.

Until the end of 2019, Bitcoin’s value was somewhere around the $10,000 mark, which was okay. However, following the rise of the coronavirus pandemic, the system got a hit. There was a point when the value was down to $3800, especially when the economy was struggling like anything. Then, as the economies started opening up gradually, we could see the corresponding changes in Bitcoin’s value.

Currently, the value of Bitcoin is at one of its all-time highs, at more than $45,000. It seems to leverage the shift to a mostly-digital form of living as well.

Key Dates in the History of Altcoins and DeFi in Cryptocurrency

The following entries mark the beginning or growth of alternative coins that impacted the industry of cryptocurrency transactions.

Dogecoin was born, and it was designed to mock the increasing number of cryptocurrencies. The coin was a part of many marketing campaigns, though. However, over time, Dogecoin has attained value and demand in the cryptocurrency industry.

In July 2015, the Ethereum project was launched by the Ethereum Foundation. Since then, the platform has become a competitor to Bitcoin as a better way to enhance the Decentralized Finance sector. The Ethereum project is noted for its broad support for smart contracts. Because of this, many have used Ethereum to carry out ICOs.

The Ethereum community voted for a hard fork of the Ethereum blockchain to reverse Ether’s theft worth $50 million. Since then, Ethereum Classic is considered the original project. After this, the Ethereum team has worked to improve the overall security of the platform.

In August 2017, Filecoin was launched, and it marked the transcendence of Decentralized Finance from just a way to manage money. Filecoin was imagined as a decentralized payment system that allowed anyone to get ultra-secure cloud storage by paying competitive rates. It uses the core ideas of blockchain to ensure maximum security and convenience.

As you can see, we cannot cover every event in the history of cryptocurrency and altcoins. Instead, we have mentioned events that shaped the Decentralized Finance industry into something that we see today. We hope this guide helps you fast-track your knowledge of crypto history.