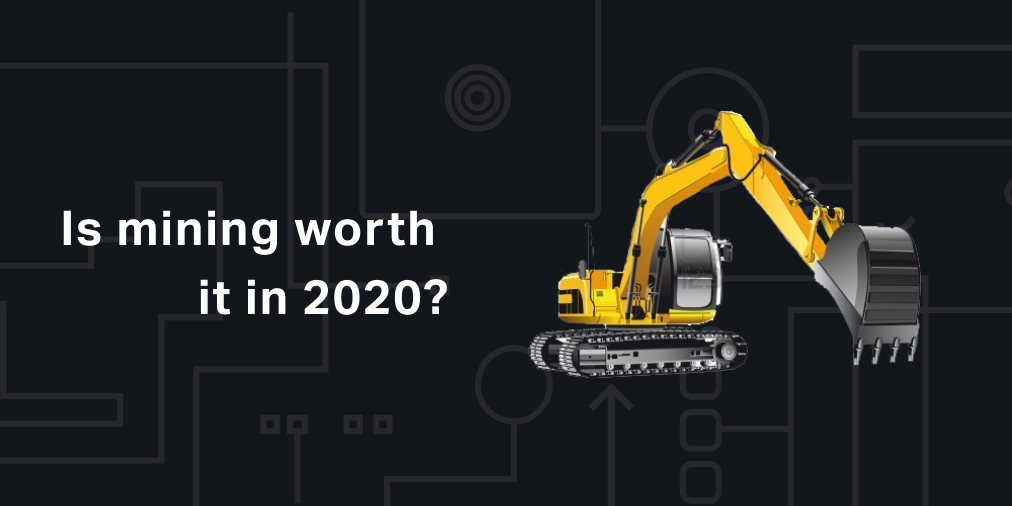 Cryptocurrencies have entered the mainstream with a bang, with more and more people developing an interest in this strange yet new world of blockchain. Those who have followed cryptocurrency from the beginning know whether or not it is worth investing in. On the other hand, people who are new to the world of cryptocurrency are fascinated by the fact that they can actually mine digital currencies like Bitcoin. But is Bitcoin mining really worth it in 2020? The short answer is “YES” and the long answer… well, it’s complicated.

In the early days, mining began as a well-paid hobby. For instance, early adopters of Bitcoin had the chance to make 50 BTC every 10 minutes using a CPU or GPU system from the comfort of their homes. Those who thrivingly mined just one Bitcoin block and have held onto it since 2010, have $450,000 worth of BTC in their wallet today, in 2020.

This is enough to encourage any hobbyist or enthusiast to start with mining. But, it is easier said than done. The dynamics of mining changes with every Bitcoin halving, meaning it becomes more and more complicated.

Today, mining is not something that can easily be performed from the comfort of your home. Dedicated miners have warehouses filled with computers and mining systems to get done with the process.

So, in short, it is not that easy. To help you understand the dynamics of cryptocurrency mining and whether or not it is profitable, we have designed this post where we will cover all the possible aspects.

Before you get to know crypto mining’s worth, you should first understand what mining actually is.
To put it in simpler terms, cryptocurrency mining is the process of setting up machines and programming them to perform specific tasks to acquire a little bit of the digital currency.

Your system, basically PC, will perform certain tasks that are required to obtain even the slightest bit of cryptocurrency. These systems run sophisticated algorithms to perform the tasks, also known as “Proof of Work” (PoW). The algorithm is designed to create a fair playing ground for all the individuals looking to mine cryptocurrency.

Miners are a part of a mining pool where they task themselves with math equations. The more you want to mine, the tougher will be the math equations. While it brings balance to the mining pool, it also motivates the use of stronger and bigger machinery.

Today, miners have set up state-of-the-art mining facilities in warehouses just to increase their chances of acquiring even the slightest amount of cryptocurrency.

Although there are several factors included in the mining process, if your system or PC is able to contribute to the mining and discovery of cryptocurrency, the general idea is that you will get a share of the spoils.

We think this is the simplest way to define crypto mining.

Over the years, crypto mining has gone through some ups and downs. Not all mining is the same. In 2018, video card manufacturing giant Nvidia announced diminishing sales. It was after the company saw massive growth in its share price over the course of two years – at least 7 times. Then it dropped by over 5%, indicating that the demand for Nvidia GPU systems has drastically reduced. It was not that people put an end to mining, but it was all about miners trying out different methods, other than GPUs, for mining. This was considered a turning point for mining.

Given that not all blockchains are equal and the dynamics of the miner population directly influence the returns of mining on every blockchain, some blockchains have withdrawn from the PoW consensus mechanism altogether.

Nevertheless, mining the oldest cryptocurrency, Bitcoin network(BTC), has been a cause of doubt for DIY GPU miners. For the past couple of years, GPU hashing power has been overshadowed by the dedicated ASIC miners. This is especially because of the nature of BTC’s mining algorithm (halving). So, your ordinary computing system will face mining difficulty during the process.

Ethereum, on the other hand, is somewhat different as its hashing algorithm relies on the memory look-up. And its hashing power is inherently restricted by memory bandwidth. GPUs come with excellent memory systems to meet the demand for sophisticated mining operations. Therefore, over the years, ETH has been served by GPU rigs, which are set up by mining farms or individuals.

Last but not least, altcoin and litecoin present a different story. But they provide excellent opportunities for individual miners who buy video cards because of the lack of congestion.

The diminishing ROI caused by the suppression and drop of digital currencies, as well as electricity costs, are the primary influencers in how mining works today. Power consuming GPUs have low hash rates that put Bitcoin miners in the red zone. Essentially, as the cost of the currency reduces, the cost of power consumption dominates to lower the profit.

#2 No Scope for DIY Mining Until Prices Rise Again

For a 4 GPU mining configuration, you may have to spend around $3000. While mining farms are endowed with the time, have the resources, and an engineering team to make personalizations in their favor, hobbyists and enthusiasts lack all these.

In addition to losing money with little to no chance of mining success, the odds of getting an ROI for DIY miners within a year are extremely low. Miners have realized that the set up cost outweighs the benefits they get from mining.

2020 is the era of advancement for crypto mining. Those who set up mining farms have special contracts with the vendors. They purchase mining hardware at cheap rates in mass quantities. And with their knowledge and experience, they design their own low-power configurations. They don’t prefer buying video cards from retail stores. They have the economy of scale, know-how, and engineering teams build a sustainable mining infrastructure while keeping the costs down. In addition to all this, mining farms get cheap power from Canada’s hydroelectric dams or Iceland’s geothermal power sources. This gives the miners the ability to profit, even at a low price of Bitcoin.

Developers are constantly working on bringing innovation to the mining process. OptDyn, a pioneer of P2P Multi-Access Edge Clouds, is producing turnkey miners for memory-hard hashing algorithms. This will provide flexible turnkey solutions, like the GPUs, but they are less expensive. It will also have high performance with low power consumption.

The Bitcoin hash rate is still struggling to reach its all-time high since March 2020. But, experts believe that it won’t be the same, and at some point, say summer 2020, the hash rate is expected to break the old records. This means mining could get a lot easier for mine farms and DIY miners.

What is the future of Mining?

Crypto mining is evolving and not dying. To benefit from mining, experts suggest that you consider the latest evolving solutions, where the investment is offset through a cloud subscription model or through your telecommunication service provider. Mining is taking other forms. The decreasing demand for GPU miners doesn’t mean crypto mining is dead. You can mine Bitcoin with the right technology in use.