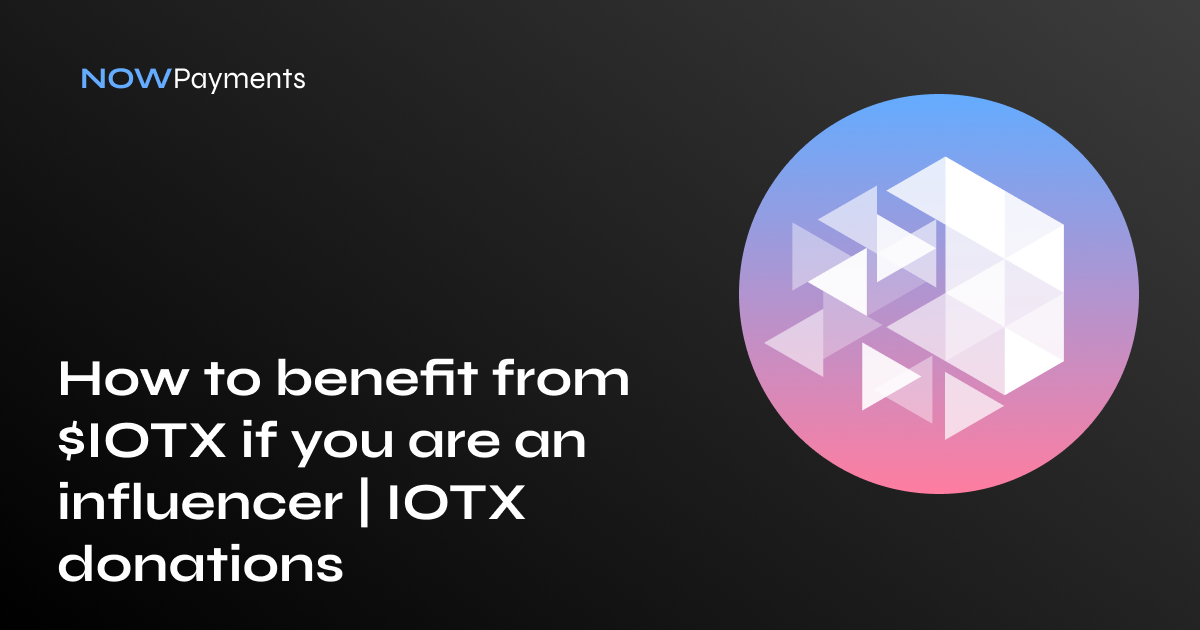 IoTeX is widely recognized as one of the most innovative blockchains of the new generation. IoTeX has an impressive utility since it seeks to power the Internet-of-Trusted-Things infrastructure of the future. IoTeX also has a great native cryptocurrency called IOTX. This cryptocurrency, to a considerable extent, outperforms the majority of its counterparts across a variety of metrics. The efficiency of IOTX makes it a perfect donation material that influencers such as bloggers, musicians, actors, writers, and others can make use of. NOWPayments provides tools for accepting IOTX donations.

IoTeX is an EVM-compatible blockchain platform which was founded in 2017. IoTeX fuels the Internet of Trusted Things, an ecosystem allowing people and machines to interact with guaranteed trust and privacy. IoTeX enables people to own and control their smart devices, as well as the data and value they generate. IoTeX is backed by a global team of 30+ top research scientists and engineers.

The core technology of IoTeX combines blockchain, decentralized identity, and secure hardware to enable user-owned IoT devices and networks. There are actual use cases for IoTeX. For instance, the most notable example of an IoTeX-powered device is Ucam, a security cam which is secured by an uncrackable 256-bit private key.

Why use IoTex for donations?

Increase the size of donations

It is no doubt that the larger the donation, the better it is for the influencer. Yet, the traditional donation methods often severely downsize donations of influencers. One of the reasons why the mainstream donation methods are not the best solution is the fees which they charge users. Sometimes, users end up paying 50% of a donation in fees. Moreover, when using popular cryptocurrencies such as ETH for the purpose of donations, users also often have to pay massive fees. Nevertheless, IOTX can become a perfect alternative to high-fee donation options. IOTX transactions cost less than $0.1, which allows users to get their donations almost in their entirety.

Get donations without delays

Influencers also need to receive their donations in a fast way. The traditional donation methods may entail considerable delays in money transfers. At the same time, certain cryptocurrencies, including Bitcoin, also cannot boast fast transaction speeds. Yet, IOTX, with its practically instant transaction finality, constitutes an ideal donation method for influencers. IOTX transactions take mere seconds, and as a result, influencers can accept their IOTX donations quickly. Streamers who use donations as a means of communication with their audience members will find IOTX donations particularly beneficial.

Featuring crypto donations is also a sensible move for those influencers who seek to get more fans. The communities of cryptocurrencies are among the most loyal and supportive ones in the world. Yet, some cryptocurrencies, such as CRTS, have smaller communities than others. IOTX is one of those coins which have a massive number of investors and enthusiasts. This is why using IOTX as a donation method makes more sense audience-wise. Essentially, influencers who decide to offer IOTX as a donation option may see an increase in the number of their followers, viewers, or listeners, as some IOTX investors will be excited to support influencers who use their favorite cryptocurrency.

How to accept IOTX donations

NOWPayments offers several solutions for featuring IoTeX donations. Those influencers who have a website can deploy a special widget or button which will allow their patrons to donate in IOTX. At the same time, those who have popular accounts on YouTube, Twitch, Instagram, or Twitter, can utilize a crypto donation link, which will take their fans to a page where they will have a chance to donate in IOTX.

In order to start accepting IoTeX, follow these steps:

IOTX is one of the best cryptocurrencies for influencers that want to get crypto donations. NOWPayments offers tools for featuring IOTX donations.