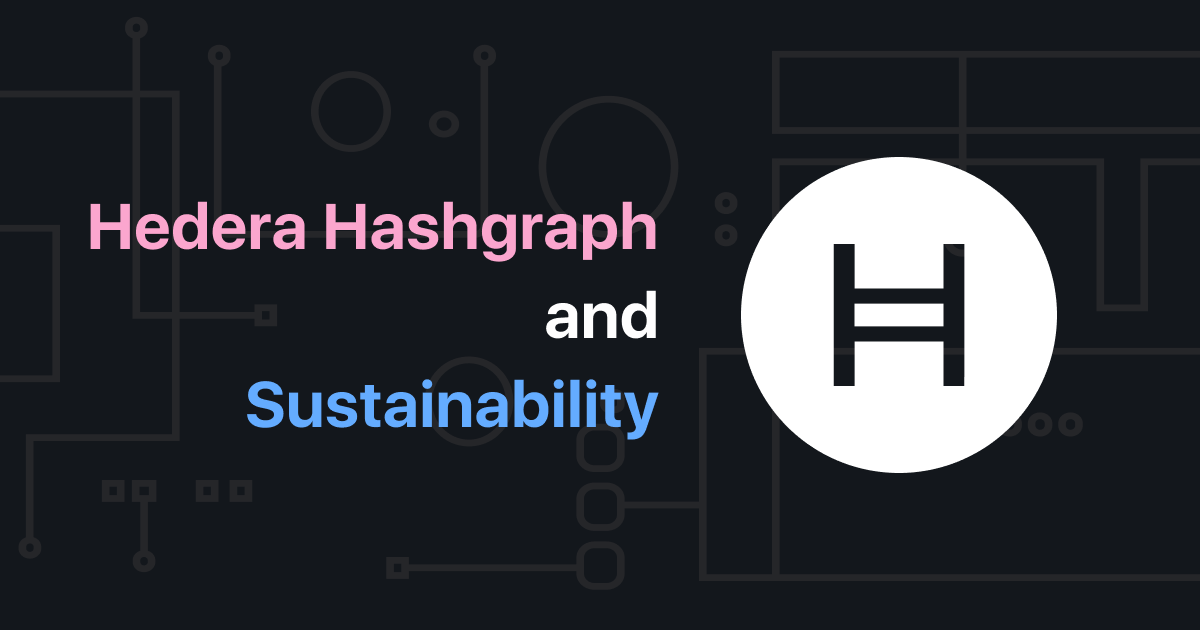 Blockchain and distributed ledger technologies (DLTs) have given rise to fast and secure transactions which do not require any involvement of centralized third-party intermediaries, such as banks or brokers. Today, cryptocurrencies constitute perfect means of value exchange and are sought after by investors. Yet, there is a catch — blockchains demand large resources to operate properly. For instance, proof-of-work consensus mechanisms used by Bitcoin and Ethereum utilize terawatts of electricity which translates into a gigantic carbon footprint. Nevertheless, there is an alternative called Hedera, a public distributed ledger technology that utilizes hashgraph consensus to retain and improve upon the best qualities of blockchain, while using significantly less electricity.

The concept of hashgraph was first introduced by Dr. Leemon Baird in 2016. He partnered with Mance Harmon to create the company Swirlds, which raised initial funding for the project, to determine all of the essential aspects of the new technology. In 2018, the Hedera mainnet was launched, and fifty billion HBAR were minted. In September of 2019, Hedera opened its network for anyone to build and deploy their own applications. The Hedera Governing Council is a body consisting of up to thirty-nine members, including IBM, Chainlink Labs, LG, Shinhan Bank, and Google, which exercise equal control over decision making, ensuring the network remains decentralized

Compared to blockchain, hashgraph espouses a different approach to maintaining integrity of a distributed ledger. In both networks, users can conduct transactions that are recorded in a container (block) which, in turn, gets disseminated across the network. The primary difference lies in the fact that in blockchain, the system generates a chain of blocks where all the excessive containers get discarded. In the case of hashgraph, the network recognizes all containers and keeps them in the ledger. Blockchain gets rid of all the extra blocks to avoid forks, while hashgraph incorporates all of its containers.

HBAR is the native token of Hedera Hashgraph. This cryptocurrency is mainly used as fuel for transacting on the network, as well as a protection mechanism. Users of the Hedera network need to spend a small amount of $0.0001 in HBAR as compensation to nodes each time they send a transaction. Additionally, developers spend HBAR to deploy their applications on Hedera or issue tokens (learn more about Hedera use-cases here).

Hedera utilizes the proof-of-stake protocol, and users can stake their HBARs to nodes to increase their weight in influencing consensus on the network. The process of weighted voting significantly reduces the possibility of a malicious attack since an actor attempting to engage in it will have to own one-third of all HBARs, which is extremely expensive.

Thanks to its unique technology, Hedera Hashgraph manages to attain one of the highest throughputs in the crypto industry. Hashgraph’s only limitation is the bandwidth of the nodes. Yet, even a node with a standard Internet connection used by the majority of households can handle a transaction volume comparable to Visa’s. As a result, Hedera is able to process 10,000 or more transactions per second, which is absolutely mind-blowing in comparison to Bitcoin’s 7 transactions per second. Essentially, Hedera users can send and receive HBAR in mere seconds.

Hedera’s hashgraph algorithm is not the only element that keeps the network impenetrable to external attacks. Hedera relies on encryption using TLS 1.2, and every transaction processed on the network receives a digital signature. All Hedera algorithms comply with CNSA Suite security, a standard that the U.S. government employs to protect Top Secret information.

Hedera is Asynchronous Byzantine fault-tolerant which means that it would take over ⅓ of the network’s nodes (voting weight) to collude and prevent it from reaching consensus. Moreover, there is no possible way for them to make changes after a consensus has been reached. The hashgraph gossip protocol also makes it impossible for a node to block any transaction from entering the network, thereby enabling fair access

As discussed previously, blockchain platforms make use of large volumes of electricity which often equal the annual supply of energy of whole countries. Hedera Hashgraph is different since its power usage and, subsequently, impact on the environment are extremely minuscule. According to some estimates, Hedera utilizes 600,000 times less electricity for one transaction than Ethereum and 5 million times less electricity, compared to Bitcoin. Visa is the only payment processor which comes close to Hedera, but it still is nowhere as efficient and as sustainable as the hashgraph-based network.

Hedera’s native cryptocurrency HBAR makes a perfect means of transferring value since its network is fast, reliable, secure, and charges small fees ($0.0001 USD paid in HBARs). Hedera also enjoys a large following of dedicated investors that believe in the success of the technology and are ready to use their HBARs as payment. NOWPayments assists companies in deploying crypto payment gateways that let them accept digital assets, including HBAR.

There are several ways one can start receiving Hedera’s HBAR. Crypto invoices are the simplest way for any business to tap into the new exciting world of crypto. One can generate their crypto invoice in mere minutes, and it will include all the details about payment, such as the recipient’s wallet address and the amount that the customer has to send.

Merchants that host their eCommerce stores on platforms such as WordPress, PrestaShop, or WooCommerce plugin can accept HBAR by simply installing a plugin. Those who would like to grant clients an opportunity to pay in crypto but would still want to receive their payments in fiat can opt for the conversion feature.

Bloggers, streamers, charities, and generally people who do not offer any product or service for sale have an option to place a crypto donation widget, button, or link on their website and thus give their audience a chance to donate in HBAR or donate crypto of their choosing.

Hedera Hashgraph is a network that presents itself as a faster and more reliable alternative to blockchain. By utilizing the hashgraph technology introduced and developed by Dr. Leemon Baird, it manages to attain extreme throughput without compromising on sustainability.

In fact, Hedera Hashgraph uses five million times less electricity per transaction than Bitcoin. This translates into a fairly small impact on the environment in the form of a carbon footprint. The network has excellent transaction speeds and low fees. Overall, Hedera is an ideal option for any company or individual that wants their payments processed swiftly and securely.

Top 10 cryptocurrencies to accept as payment