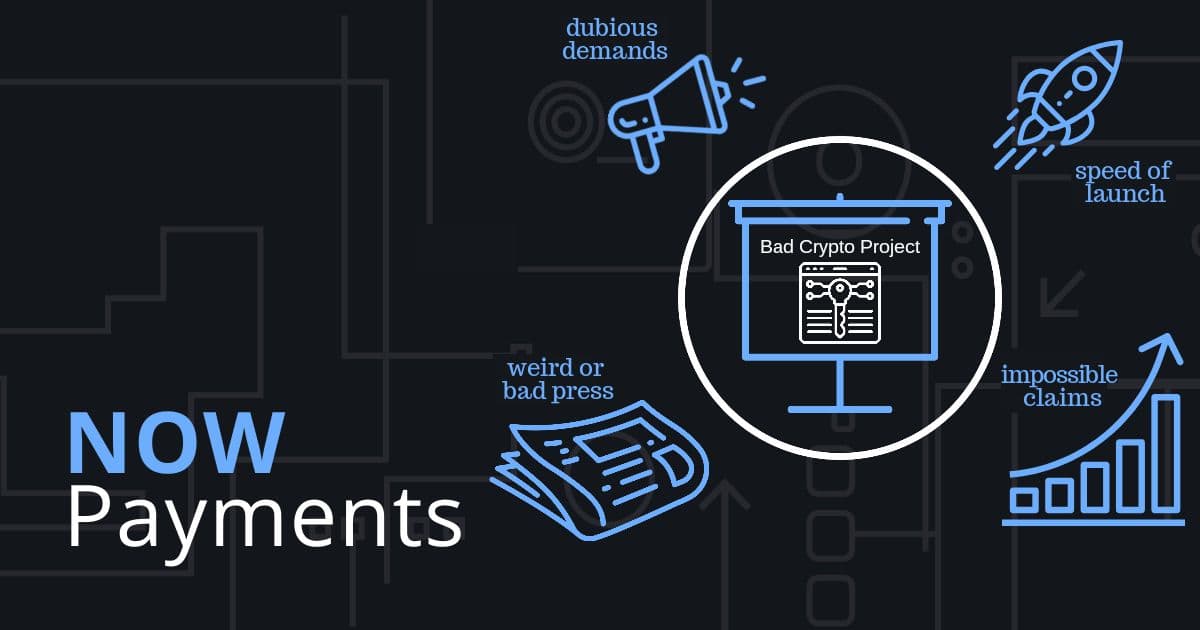 NOWPayments is here to help you tell a good project from not so good. We know good projects, and we would like to share some important information on how to stay vigilant and avoid fraud in this mad but exciting world that is full of opportunities.

One of the greatest opportunities out there is the fact that you can accept crypto as payment, right?

Thanks to its blend of technological mystery mixed with the greed of those attracted, the cryptocurrency industry provides ample opportunities  for scammers. From trading scheme scams to fake cryptocurrencies, and ICO operators absconding with great fortunes, just about every ruse has been tried.

There are ways to spot a bitcoin scam though. To experienced users, they might seem obvious. Yet, naive newcomers, attracted by rapid gains, should consider these dangerous signs and not let greed distract them from reality.

10 Signs to Look Out For in a Crypto Project

A popular tactic of scammers committing crypto fraud is to create an air of authority and exploit victims out of money. It’s nothing new but, relatively speaking, payment via cryptocurrency is.

The scammer calls the victim up, spoofing the identity of a tax agent, police officer, or similar. They allege some infraction of the law and demand payment via cryptocurrency. It’s not very sophisticated and will have a lousy success rate. Namely, because police departments or tax agents or any other government official don’t use cryptocurrency!

There’s an old saying that if something sounds too good to be true, it usually is. Unfortunately, that saying is almost always right too. There are loads of different flavours of crypto frauds. One thing that unites many of them is the impossible claim.

The problem with the idea of selling access to a trading system is that the more people use said system, the less profitable it becomes. It makes no sense to sell a “flawless” trading system that guarantees profits when you could just deploy it yourself.

If anyone is telling you that something is risk free in cryptocurrency, they’re lying to you. Even if the system they’re shilling works flawlessly without a single bug (highly unlikely), there are risks to the entire industry that stop anything, even Bitcoin, being risk free.

Regulators are paying increasingly close attention to the industry. Then there’s the possibility, albeit remote, of some critical vulnerability being found in bitcoin. Some major technical or regulatory black swan event is certainly a risk. Risk free is almost always a lie and is a serious red flag on any investment.

When ICOs were all the rage a couple of years ago, the vast number of new projects coming out every week provided perfect cover for scammers. Given how easy it is to write a technical-sounding whitepaper with some grand vision, and produce a token, loads of crypto fraudsters got in on the act too. While there are far fewer token sales these days, they do still exist and no doubt there are still scams among them.

Things happen in cryptocurrency pretty fast and with the explosion of activity surrounding decentralized finance (DeFi), it’s only getting faster. As part of the recent boom in yield farming, thousands of new projects were being listed on the decentralized exchange Uniswap every week.

New tokens for platforms that were just days old and which featured copied code that had been copied from other projects frequently appeared in front of potential buyers. This was possible because of the lack of listing policy at Uniswap. Among many legitimate efforts to redefine finance were poorly coded attempts at something new but possibly ill thought out and some outright scams. Both can and have resulted in loss of funds.

Projects that go live after only a matter of days planning may or may not be scams. Either way, rushed, unaudited code presents a risk to all users. Although the first into a new project are often those most handsomely rewarded, they’re also more likely to suffer if there are flaws or backdoors in the code.

Before you part with any money in the cryptocurrency world, you should do plenty of research.

One of those things to look for is mention of the company or project you’re thinking of using on popular cryptocurrency-focused forums. Try on Reddit and Bitcoin Talk, for example.

It’s possible that you find a heap of instant bad press. That’s clearly a major red flag that you’re dealing with a crypto or bitcoin scam website. It’s also possible there are no mentions online of this company. Again, proceed with caution.

Scammers thrive on their victims’ trust. One of their favorite ways to gain that trust is by using a familiar face. Recent years have seen loads of well known personalities from the world of business and finance “front” cryptocurrency investment schemes. Well, if you believe everything you read.

Scammers will use the image of someone who is publicly acknowledged as having good business sense. They then claim that the celebrity is using or endorses the platform. Those gullible enough send their money over and usually lose it all.

If there is a celebrity endorsing your investment project, check out their social media accounts. See if their official accounts actually reference the opportunity. Also, search for non-branded material that links the famous face to the investment firm.

Clues in the code

The beauty of cryptocurrency is that it’s open source. That means everyone can audit the code of coins and tokens. Well, technically anyone can. The code is readily available. If you understand it or not is another thing.

While obviously not everyone can perform a smart contract audit themselves. There are a few things you can look out for in the code that giveaway questionable functioning of smart contracts or network rules. One is unexpected “mint” functions. Mint functions may allow the development team to create additional tokens further down the line to enrich themselves.

Reading code is complicated and realistically, without experience as a developer, you’ll not be able to do much of your own analysis on brand new projects. It’s much safer to wait until a professional auditor has checked the code.

The cryptocurrency industry prides itself on being open source. Everyone can share code, improve on it, and make systems stronger. Some crypto projects, however, don’t adhere to this unwritten rule. You should treat them with caution.

With closed source systems, there is no way of knowing exactly what’s going on with software. The kind of bugs and vulnerabilities mentioned above are completely sealed from view. If the project has not been audited and is not open source, absolutely avoid it. Even if it has been audited, you should still question whether you want to use something so contrary to the spirit of cryptocurrency.

If, despite all of our above tips, you do manage to get to the point where you need to make a payment to some company offering cryptocurrency services, there is one more tell-tale sign that could stop sending money to a bitcoin scam site before it’s too late.

Legitimate cryptocurrency companies have regulatory obligations to uphold. These include Know Your Customer and Anti-Money Laundering checks. If a company is happy for you to send anything more than a few hundred dollars without first disclosing your identity, this should be a red flag too. Scammers, understandably, usually don’t register with the necessary agencies and, therefore, don’t bother with things like KYC and AML checks.

As a radically new form of money, there is scant understanding surrounding cryptocurrency. It’s where the financial meets the technical – two areas that non-specialists are typically weak in. For many people, they know nothing more than the fact that early investors made a lot of money. It’s the thought of doing the same that attracts a lot of newcomers to the space too.

The combination of misunderstanding and greed makes for rich pickings for the many scammers preying on the most gullible of newcomers. So far, bitcoin fraud cases and other crypto scams have cost their victims billions. Hopefully, with our tips, you should avoid becoming part of a similar statistic.