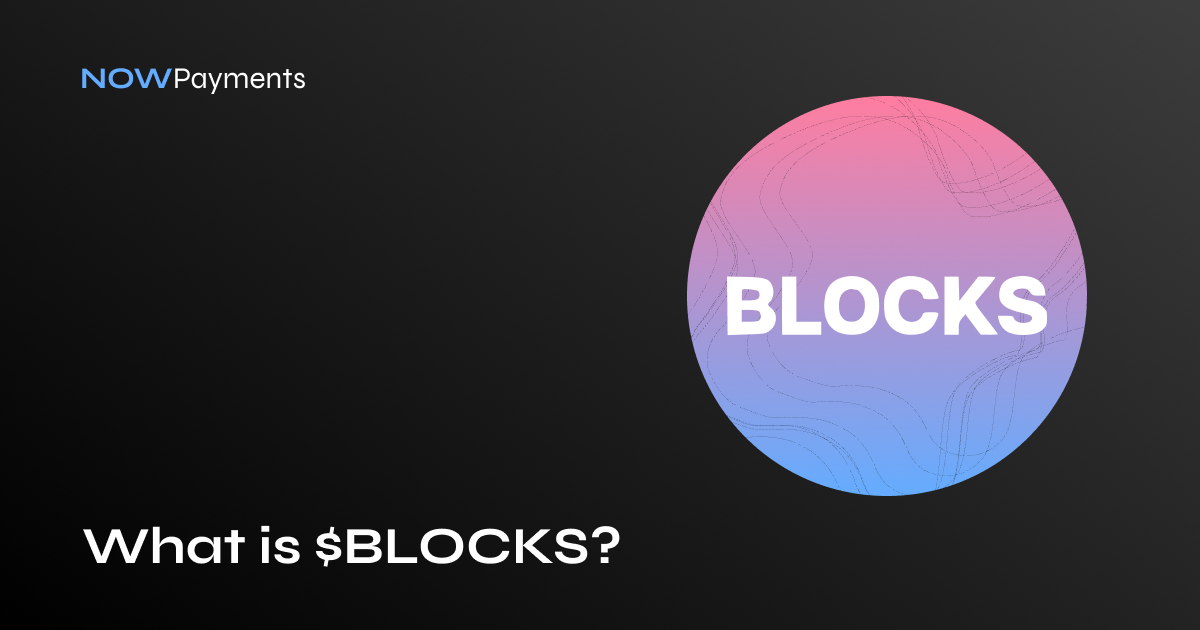 Although blockchain revolutionized many industries, the major part of the corporate world has still not embraced this technology. BLOCKS DAO LLC seeks to facilitate the process of mass adoption by helping companies to migrate their operations to blockchain. In order to achieve it, BLOCKS relies on a blend of blockchain and non-blockchain partnerships. BLOCKS is the native cryptocurrency of the project, whose utility is expected to grow significantly as the organization integrates more projects. NOWPayments assists businesses in accepting BLOCKS as payment.

BLOCKS started out only several months ago, namely, at the end of 2021, but it has already proven its massive potential to investors and crypto enthusiasts. BLOCKS was formed because its developers believe that many of the world’s most important economic initiatives over the next decade can be addressed through blockchain. The project intends to offer blockchain-based solutions to companies from different industries, including aerospace, defense, finance, insurance, title, real estate, data storage, supply chain, and global peer commerce. The project authors are certain that no individual blockchain can fully solve the “blockchain trilemma” of speed, security, and scalability. Therefore, they decided to design the network to use BLOCKS, bridges, and sidechains to build the world’s most intelligent blockchain grid.

BLOCKS uses a novel approach to operating an organization. Blocks is a decentralized autonomous organization. A DAO has been modeled on the premise of decentralization, where digital assets represent membership and have rights defined by the operating agreement. That operating agreement can be facilitated autonomously through a series of “Smart Contracts” that operate without any human interaction. While one person or entity must form the DAO, they do not retain sole control over the DAO. This means the business can run without a traditional business structure. BLOCKS became the first legally registered DAO organization in the world, which became possible thanks to the close work of the project with Wyoming legislatures.

Benefits of $BLOCKS for accepting

Businesses can provide their clients with private payments through BLOCKS. Since, in order to conduct a BLOCKS transaction, one does not need to disclose their private info, BLOCKS can be integrated as an anonymous payment method by companies. There is also no formal registration with BLOCKS, so all users need to do is to issue a BLOCKS crypto address to start using the asset, which is a matter of several seconds.

BLOCKS also can be a great alternative to slow money transfer options. BLOCKS can be particularly helpful in situations when people living in different countries need to transfer funds. In the case of banks, such a transfer may take days, while with BLOCKS, this will not take more than a couple of minutes.

As mentioned above, BLOCKS plans on providing companies from different spheres with its blockchain infrastructure. This means that the BLOCKS coin will have considerable utility in the near future. As a result, by accepting BLOCKS, businesses can enter the massive BLOCKS ecosystem and spend the funds they earn on different products and services within the ecosystem.

BLOCKS guarantees the highest grade of security to its users. Moreover, since BLOCKS is a decentralized peer-to-peer system, it lets users avoid many kinds of fraud. For instance, BLOCKS helps companies to protect their operations from chargeback fraud because BLOCKS transactions are irreversible.

How to accept $BLOCKS

2. In the Settings section, specify your BLOCKS public address to which you would like to receive payments and generate your API key.

3. Choose the tool with which you would like to accept BLOCKS. Read about all options here.

BLOCKS serves as an organization that facilitates the mass adoption of blockchain technology. NOWPayments helps companies to accept BLOCKS payments.