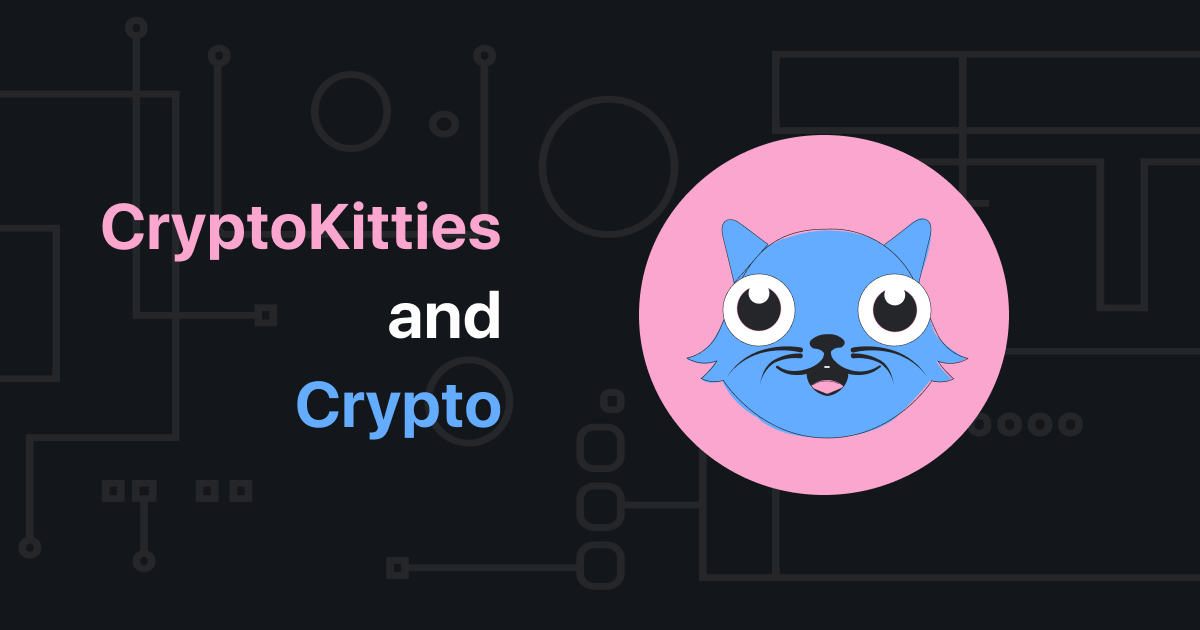 When people hear about blockchain, they usually think of Bitcoin, Ethereum, and other projects which were created to offer solutions to real-world problems. Nevertheless, there is another side to such a versatile technology; namely, blockchain is also great for entertainment. Perhaps, everyone has heard of crypto casinos that rely on the provably fair algorithm that verifies the fairness of online venues. Y

Yet, there are blockchain gaming applications that go beyond gambling. One of them is CryptoKitties, a blockchain game that caused a sensation in the crypto community after its release. In several years it has grown to one of the largest projects on the Ethereum network.

CryptoKitties is a blockchain project; an online blockchain game that will cause a sense of nostalgia in any who played Tamagochi in the nineties. CryptoKitties was originally designed to explore the concept of digital scarcity, using smart contracts and ERC721 tokens.

When and how it was launched

CryptoKitties had its start at the biggest Ethereum hackathon in 2017 in Waterloo, Canada. The team behind the project presented their blockchain-based game featuring cute kittens, and it instantly became the talk of the town. CryptoKitties team consisted only of four people and could not afford conducting a massive marketing campaign to promote their product, so instead, they decided to target a small but well-versed audience. Essentially, they presented their project to the hackathon participants, each of whom received two kitties. These first users started breeding their crypto cats producing new offspring and thus generating additional kitties. As the word about the new exciting game spread out, more people started joining the game. By the end of the hackathon, players bred more than one thousand new kittens, a demand for whom was suddenly growing exponentially. Moreover, the hackathon provided the CryptoKitties team with an opportunity to gain invaluable experience and knowledge from fellow crypto enthusiasts and investors.

How does it work?

Now onto the main question, “what mechanisms govern CryptoKitties?” As mentioned earlier, CryptoKitties is a project which is built on the Ethereum blockchain. Subsequently, every kitty is a non-fungible token (NFT) which means that it is one of a kind and cannot be replicated. Moreover, players receive full ownership of their kitty, and no one has any authority to take it away from them. CryptoKitties utilizes a Genetic Algorithm that ultimately lets the game create new kitties. The algorithm is based on how real-world genetics work. After two kitties engage in breeding, the resulting child will have certain characteristics inherited from the parents. Each kitty has its Cattributes, individual traits which are recorded in cats’ code. Each kitty’s genome consists of twelve blocks that contain four genes, one primary and three hidden ones. The primary gene constitutes the trait that is visible in the cat’s appearance.

CryptoKitties was among the first blockchain projects which promoted the idea of crypto collectibles, NFTs, whose value is determined by their rarity. CryptoKitties remains popular due to its reputation as one of the largest games on the Ethereum network and the fact that it offers scarce products. Each kitty is unique, and many individuals wish to add crypto cats to their collections because their value may surge even higher in the future. Kitties are no different than any other collectible item, be it a comic book or guitar. Players hold their kitties in a wallet and can convey ownership rights by selling them. Moreover, there is no possible way to counterfeit crypto cats. Each kitty has its own personal number and unique set of data which can be used to verify authenticity. This feature makes kitties even more valuable because physical collectibles can be easily replicated by criminals.

Which crypto can get kitties?

How to make money with CryptoKitties?

One of two possible ways to make money in CryptoKitties is breeding. Siring is the feature which lets players put up their kitties for a breeding auction. To start an auction, players have to set the starting price, the amount of Ether they hope to receive for letting others breed with their kitty. Additionally, they have to determine the end price, the minimum amount of Ether they are ready to accept. After the start of the auction, the price will slowly fall until it reaches the end price. Once other players accept the terms of the siring contract, the owner of the kitty will receive the Siring fee, yet they will also have to pay the breeding fee, which includes the costs associated with the creation of a new kitty.

Another way to make money in Crypto Kitties is to trade them. There are two possible paths one can take in order to sell kitties at a profit. First, players can breed new kitties and then sell them. Kitties with rare traits are generally more in demand than ordinary ones. So, players have excellent prospects of creating new kitties and successfully exchanging them for Ether. Nevertheless, one should always remember that kitties have a cooldown period during which they cannot produce new kitties. Another path one can take is simply reselling kitties. Prices for crypto cats are constantly varying, so players can always get themselves kitties at a low price and then offer them to other players at a higher one.

CryptoKitties accept Ether as payment. Yet, this feature is available to any business, and there is no need to deploy your own application on the Ethereum network. NOWPayments offers solutions which can help your business accept more than 70 cryptocurrencies. Crypto invoices are a simple tool which you can deploy in a matter of minutes, and your users will be able to reuse them indefinitely.

Owners of eCommerce stores on platforms such as PrestaShop, and WooCommerce, and several other ones can install NOWPayments plugins that will allow them to process all crypto payments of their customers automatically. Finally, charities and bloggers can place a crypto donations widget, button, or a link on their website or social media and accept cryptocurrencies using these tools. NOWPayments is a non-custodial service meaning that all payments of your clients go straight to your wallet, and you retain full control over your funds.

Blockchain is mainly known as a platform that hosts cryptocurrencies. Yet, there are many other applications for which it can be used. CryptoKitties is a game that constitutes an example of a blockchain-based project. CryptoKitties exists on the Ethereum blockchain and lets players breed, buy, and sell cute digital cats. Each kitty has a set of traits that define its level of rarity and uniqueness. Players are hunting for the rarest of crypto cats and find ways to sell them at a profit.

The game has been in existence for four years and has grown to a well-established project that thousands of people enjoy playing. Anyone can buy a kitty with Ether. With NOWPayments, you can follow the steps of CryptoKitties and start accepting Ether as payment from your clients.