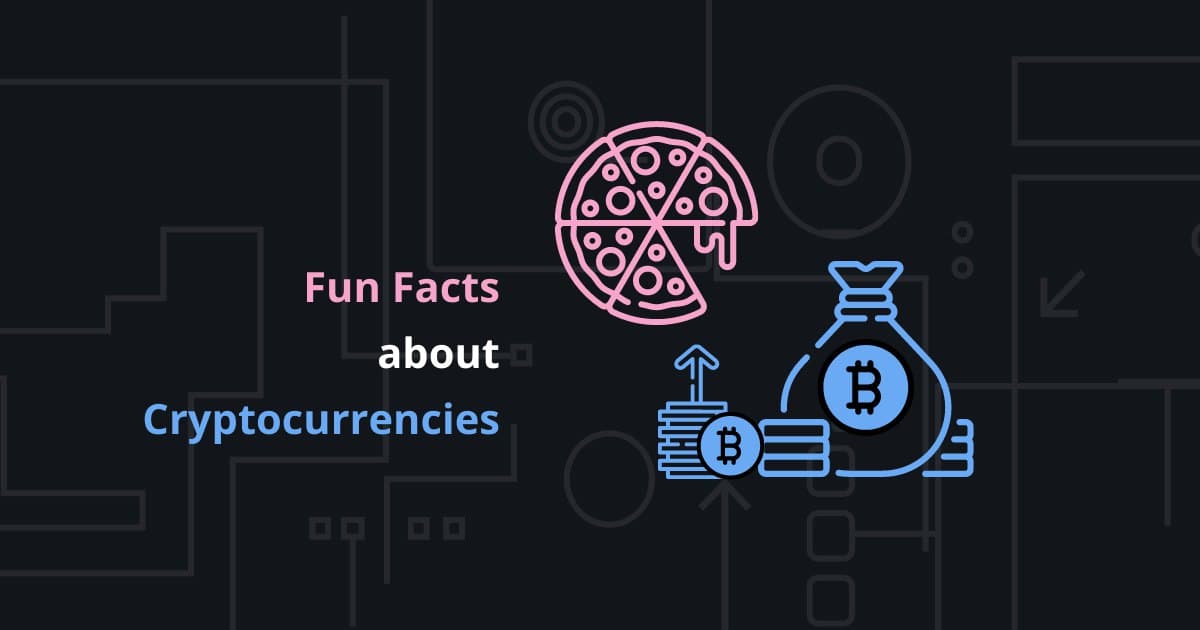 Cryptocurrencies aren’t all serious and money-making machines. There are 100s of crypto memes, fun facts, and odd parts to the cryptocurrency sphere. Some of the things you read today may be something you’ve seen before and some things will come up making you think “No way!! Did this really happen?” So let’s get started with this list of top 7 crypto fun facts.

Fun Fact 1 — The Half a Billion Dollar Pizza

In May 2011 Laszlo Hanyecz purchased his Papa John’s pizza using BTC as the currency. It was one of the first real-world transactions to occur where bitcoin was swapped for a back then great-tasting pizza. Today that pizza is a bittersweet memory. The pizza cost a whopping 10,000 Bitcoin back in 2011. However, that didn’t cost bitcoin’s price was extremely low and very much unknown as a currency during those times.

In today’s market if you wanted to buy a $20 Papa John’s pizza you’d pay around 0.000041 BTC. If you were to spend how much Laszlo Hanyecz on his pizza in 2021 you’d have paid 490 million on 12 slices of bread and cheese. With the Bitcoin bull run in full steam expect that number to go even higher.

So the moral of this fun crypto fact is to hodl your cryptocurrencies that are worth nothing because one day they could make you a multi-millionaire because you don’t want to be listed on all the best crypto memes and fun facts about Bitcoin pages one day in the distant future.

Satoshi Nakamoto created Bitcoin in 2009 but never revealed his identity to the world. Many people have tried to locate him and find out who this person is and why they haven’t revealed themselves. There are huge questions looming around this. For instance:

These are all the questions people want to know and will only ever find out if this person or collective of people come forward into the limelight. If he reveals himself one day then this day could arguably be one of the greatest days in the cryptocurrency space.

Fun Fact 3 — There are more than 8000 Cryptocurrencies

At the moment there are more than 8000 cryptocurrencies scattered across the internet, with some exciting project ideas. It was only 12 years ago where that value was 0. With this big boom in 2017 many new tokens popped up. Some tokens have some really outlandish use cases for their tokens, for instance, PotCoin. This project wants to allow its token to be used as a currency to buy legal marijuana products. There are coins made for current and past world leaders like Putin and Trump, both having zero use cases. If you thought things couldn’t get any worse, there’s even a token called the useless Ethereum token. There’s probably a few crypto memes out there about all these fun tokens and coins.

The market is currently saturated with tokens, and it will only grow as more companies start creating cryptocurrencies to power their platforms. Expect there to be more than 6000, in the coming years and then eventually one day more than 10,000 tokens.

Fun Fact 4 — China is the biggest miner of Bitcoin

In recent times Bitcoin mining has become very difficult for the average person. More computer power and sophisticated systems are required to solve the mathematical equations to get the currency. At the moment China has 75% dominance in mining power over the entire bitcoin mining industry. This may potentially increase, as mining could one day cost too much and not be worth the reward.

Filecoin is a fintech company specialized in data storage on the blockchain. The biggest initial coin offering (ICO) in history was accomplished by Filecoin in 2017. The crypto startup raised a massive $257M through their ICO. A large portion of this was raised in the first 30 mins, where $200M poured into the company.

This is mind-boggling new to some users, who only thought Bitcoin’s Satoshi was its lowest metric. The Satoshi has 8 zeros after the decimal place. We never hear about the other metric known as the millisatoshi which is a thousandth of a Satoshi meaning there are 12 zeros after the decimal point. If numbers and math isn’t your strongest point then we’ve got you covered. Here’s a breakdown of what each one looks like in number values:

This is one of the biggest and craziest bitcoin hacks to ever occur. In August 2010, a hacker decided it was time to hack the bitcoin mining protocol and generate 184.467 billion Bitcoins during the block. In 2010 that equated to a good sum of money if it was pulled off effectively. In today’s market, that person would be the richest individual on the planet by a landslide.

Unfortunately for the hacker, all the bitcoin that was mined during that day was disregarded within 5 hours as everything was fixed. This was accomplished with the release of the Bitcoin version (0.3.10). The hack also has its own name and is known as the ‘value overflow incident’.