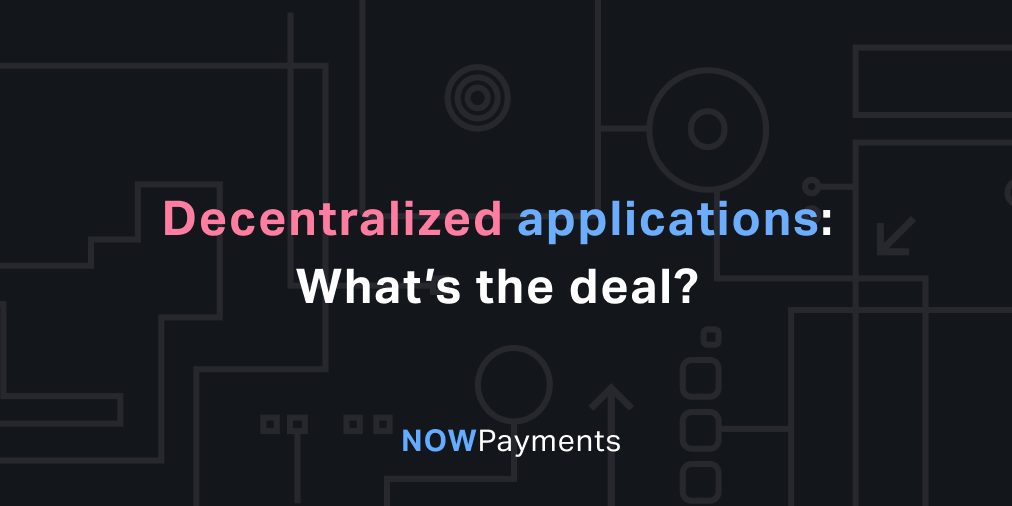 The rise of the cryptocurrency sector can be viewed as a revolution. Bitcoin was the first to jump into the fray, and it has led to the creation of an expanding industry.

One of the most prominent cryptocurrency inventions is the decentralized application, known as dApp. These are the web-equivalent applications for the crypto space as they are hosted on blockchains instead of the worldwide web, like the regular apps. What makes dApps different from the regular web apps is that a central organization does not operate decentralized apps. Their processes are unique, which makes it tough for some people to understand how they work. This post will look into what they are, analyze their history, the current state of dApps, and what the future holds for them.

dApps are digital applications or programs that operate on a blockchain network or P2P network of computers. The decentralized applications operate outside the purview and control of a single entity.

Decentralized apps, on the other hand, as it has already been mentioned, run on blockchain networks or peer-to-peer networks. With dApps, there are multiple participants on all sides. Some participants are consuming content, while others are feeding the network the required one. Also, some people could be performing both functions simultaneously.

In short, DApps are public, open-source, and decentralized apps that are free from the control and interference of a single authority.

Besides finance, some cryptocurrency projects recognized other applications for decentralization. These projects take advantage of blockchain technology to eliminate the middlemen that dominate various industries.

Ethereum has remained the leading and most popular framework for dApps. Several decentralized applications like CryptoKitties and more have become popular and are being used for various functions in the blockchain space. Also, an increasing number of these dApps are gaining usage in the real world as more people recognize the benefits of using decentralized and peer-to-peer applications.

The current state of dApps

Over the past few years, the dApp sector has grown tremendously. There are various dApps hosted on blockchain networks such as Ethereum, Tron, EOS, and more. These apps continue to grow as the blockchain technology also evolves. Developers in the blockchain space are finding more decentralized alternatives to conduct their services.

A popular dApp, CryptoKitties, congested the Ethereum network with its thousands of users and went on to raise $12 million in a funding wave. Although CryptoKitties is just a platform for users to trade and breed digital kittens, the collectibles on the platform sold for thousands of dollars in the past. It shows that cryptocollectibles have become a valuable use case for blockchain technology. With this dApp, the users directly control the worth of the kittens and also retain the ownership of their virtual pet.

OpenBazaar is another popular dApp. It is a decentralized e-commerce solution akin to platforms like eBay. Users on most online trading platforms have to comply with the set rules and are often charge a fee for trading services. OpenBazaar isn’t controlled by anyone, not even by app developers. As such, the platform allows direct user-to-user trade to happen online.

The increasing need to create services that escape intermediaries and allow users to interact in a peer-to-peer manner directly could prove to be one of the most promising aspects of the blockchain movement.

Since a single entity does not control dApps, it means that decisions about the network have to be taken via a general consensus. With blockchain technology, the network nodes don’t have to depend on each other regarding the validity of data. This means that dApps are tamper-resistant and were designed to be highly secure.

No Central Point of Failure

Decentralized apps can’t be shut down since there is no server to take down. Information in a dApp is decentralized across all the network nodes. Each node is independent, which means that if one fails, the others continue to run on the network.

Future prospects for the sector

The dApp sector has grown tremendously over the past few years. At the moment, there are more than a thousand dApps currently in operation or under development. Most of the dApps are aiming at making the world a better place to do business – transparent and fair. The state of the cryptocurrency sector leads to believe that dApps will transform various industries, including politics, gambling, energy, accounting, and more.

The power sector tends to be controlled by some large corporation that defines the rates for the consumers. Since centralized entities control the power sector, the people have no choice but to pay the set prices so they can have access to electricity.

Power Ledger is a blockchain company that is developing a dApp that would solve the real-world issue of overpriced electricity. The Power Ledger dApp would allow people to sell their extra electricity via a P2P marketplace. This would promote the usage of green energy like solar power and provide buyers with a fair and transparent price for the energy they consume.

In a democratic world, voting is a fundamental human right. In the real world, governments in some parts of the world might try to manipulate voters through violence and threats. Various types of fraud are also possible. As such, politics is a sector that would benefit magnificently from decentralization.

The FollowMyVote dApp was created by a group of developers to enable people to vote using the Ethereum network. By using a dApp to verify the identities of voters, elections can be safer, more secure, and more transparent. With dApps, there would be no cheating in the voting system as every vote would be every vote is independently verified on the public blockchain and cannot be altered.

Other industries dApps could bring massive changes to include;

Although there is so much more to decentralized applications, this post gives you an overview of the budding and emerging sector in the crypto space. Decentralized applications are helping to revolutionize the way we conduct business in various aspects of our global economy. They hold the future and will gain usage in more sectors like politics, banking and finance, accounting, gambling, real estate, and more. As such, dApps are one sector of the crypto economy that would continue to experience massive improvements in the upcoming months and years.